Way to go, Victoria — the most woman-friendly city in Canada

The Vancouver Island city was just ranked the best place for Canadian women to live by the Canadian Centre for Policy Alternatives. We spoke with Mayor Lisa Helps to see what they're doing right. 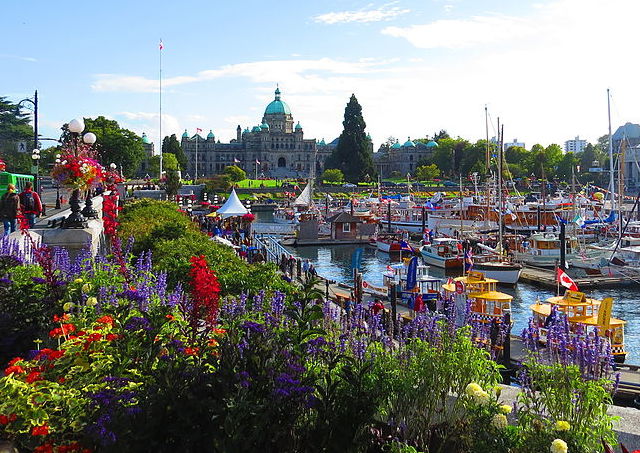 Ah, Victoria. You might know it as the capital of British Columbia, “The Garden City” or the birthplace of Nelly Furtado. But as of this week, it’s also the best place to live in Canada for women, according to the Canadian Centre for Policy Alternatives, which ranked 25 cities on measures like education, health and economic security. (Take that, Vancouver!) We talked to the city’s mayor, Lisa Helps, about what makes the West Coast destination so darn liveable for ladies.

You live in Victoria. You’re a woman. What was your reaction to the news?

Thrilled, but not surprised. One of the categories we did very well in was leadership, and there are so many women in this town who are leading the way on so many fronts. Kudos to them. Victoria is really a blending of business and community. [For example], we have a street called Fort Street — historically “Antique Row” — but now with everyone selling everything online, the shops are on the way out. Two women, Terry Hustins and Suzanne Bradbury, started the Fort Street Business Association (they called it “Fabulous Fort”). They’ve managed to line up all the businesses on the street, from the ocean to the art gallery, to do amazing stuff, including creating the city’s first parklet from a former parking lot. Women are inherently collaborative, and the women in our community really get that.

You were ranked fifth on last year’s CCPA survey. One reason for the jump to first place is that you’re the closest city in the country to achieving the same level of employment for men and women. Are there any initiatives that you’ve started recently that have contributed to that increase?

No. I can’t explain it. I’ve only been mayor since December, so in terms of initiatives … there wasn’t anything specific. But Victoria is inherently an entrepreneurial place. The business ecosystem is very strong, and we’re seeing women start and grow companies, probably at a similar rate to men, but I don’t have the data.

One of the categories the cities were ranked on was “personal security,” which is unfortunately something we still have to single out. How do you handle women’s safety in Victoria?

Our police chief, Frank Elsner, started at the beginning of 2014. He has a huge heart. He also has a 16-year-old daughter, and I think he thinks about the city like, “How could Katie be safe everywhere?” It takes a while to change the culture in any large city, but Chief Elsner is really creating a police service, not a police force. We’re partnering with the Victoria Women’s Sexual Assault Centre so that when women are raped — because women are still raped, even though Victoria is the best place to live for women — they can go to a clinic at the centre to have all the evidence taken, including the physical examination. So it’s not done with a police officer sitting in the emergency room. It’ll be the first [centre to offer this service] in British Columbia, starting in October. That’s one “only in Victoria” thing.

You beat out cities like Vancouver and Toronto. Why do you think a smaller city might have an advantage?

It’s really our scale that attracts people and makes it feel safe. We have what we call a “20-minute lifestyle,” so you can get anywhere you need to in 20 minutes — your commute could be a walk along the ocean. (We call the end of the day “kayak o’clock.”) The whole focus of local politics for the next four years is going to be creating wellbeing, prosperity and happiness. I’m curious to see how we rank next year.

Are any of those wellbeing plans specifically geared to women?

In the 21st century, we don’t have initiatives that focus specifically on women —that’s too separatist. But we’ve got an objective to facilitate social inclusion, to make Victoria more affordable [in terms of housing], but also making sure we continue to build the economy so people who are economically marginalized can find ways into the workforce.

Kitchener-Cambridge-Waterloo was ranked last. What advice would you have for them?

I can’t say. (I grew up in London, Ontario, though.) Victoria is welcoming to all sorts of diversity — sexual, racial. It’s a place that’s has acceptance built into its DNA I don’t want to say anything about Kitchener, because I don’t know what it’s up to, but if you’re last? Focus on how you can be better. How about this? I’ll invite the mayor of Kitchener to come out and take a walk with me.