Smile and the world smiles with you, goes the familiar phrase. It's a lovely idea. And perhaps it's true. But it may be that the world isn’t smiling with you as much as it's laughing at you for being such a softie. 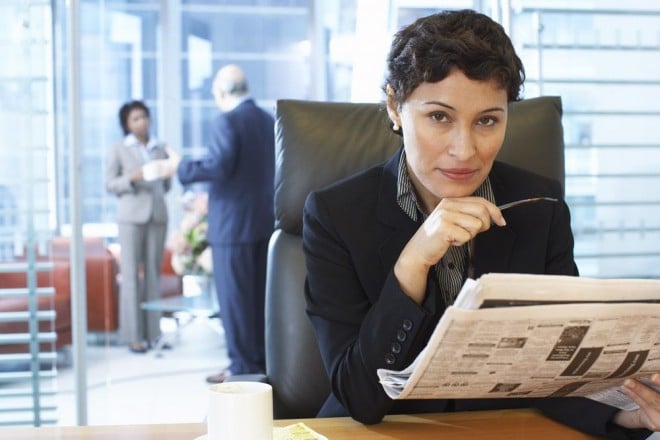 Smile and the world smiles with you, goes the familiar phrase. It’s a lovely idea. And perhaps it’s true. But it may be that the world isn’t smiling with you as much as it’s laughing at you for being such a softie. A handful of new studies (via The Vancouver Sun) suggest that smiles are for low-status individuals. If you want to appear powerful, confident and successful, don’t smile.

Researchers reviewed four studies that examined the power of facial expression. All of the studies asked people to look at images of various faces, from models to football players, who were either smiling or not smiling, and then to rate their expressions. One study asked people to look at head shots of football players and, from those limited views, guess the man’s size and personality. The players who didn’t smile were consistently rated as being bigger physically, less social and more hostile. In contrast, the smiling players were viewed as being less dominant and more social.

Study co-author Timothy Ketelaar, associate professor of psychology at New Mexico State University, explained the findings in a statement. Said Ketelaar: “Smiles can put you in a positive light by signalling that you’re friendly and trustworthy, and that you aren’t a threat to others. But higher-status individuals often want to appear in charge and as a threat, and they lose some of that power by smiling.”

The researchers argue that less dominant human beings have relied on smiles to appease stronger, more hostile individuals for as long as we have been able to lift the corners of our mouths.

“Across the few animal species that smile, [the smiles] seem to be advertising that the displayer is not a threat to more dominant individuals. In the case of social prestige, smiles seem to be providing a similar function, provoking strategic deference,” Ketelaar explained.

So when you nervously smile at your boss when you’re late for the third time in a row, you’re duplicating an action that your forebears relied on to get out of a sticky situation. And when she gives you a stony look in return, she’s mentally high-fiving her hostile, high-status ancestors.

Read more to find out how smiling calms you down.