Up close with Annie Lennox 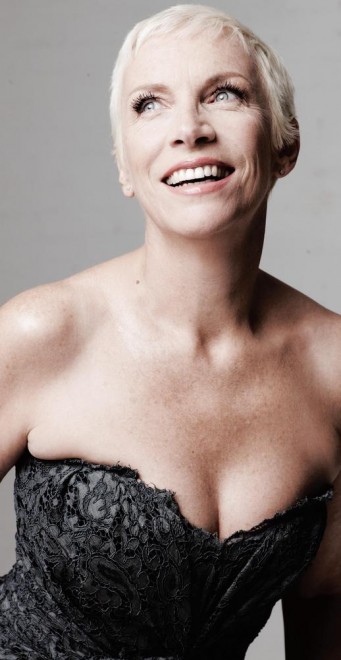 Annie Lennox is not the type of person to hold anything back. Unlike many of the media-trained singers dishing around popland — performers who memorize lines of PC-approved chatter or plant a contentious speech during their interviews — Lennox is far from scripted. In fact, the 55-year-old Scottish-born singer-songwriter is filled with refreshingly unfiltered opinions. Her thoughts on using stylists? “I still abhor anyone telling me who I am and what to wear. By and large, when stylists come to me, it doesn’t really work.” Her view on having a potential Joan Jett–style Hollywood biopic of her life made? “I don’t ever want that to happen. It’s rather lovely to look back at my career, but watching someone play me in a movie would irk me.” And her opinion on the perils of fame? “It’s a Faustian deal so one has to be careful. I’m all for being savvy in the public eye to a certain extent,” she offers, “and I do believe you have to know what is going to turn people off completely. Look what happened to Sinead O’Connor when she ripped up a photo of the Pope on live TV — her statement backfired on her and her career nose-dived. Having said that, there are ways of communicating effectively.”

Lennox’s outspoken philosophy has served her well over the course of her 30-year-plus career as a successful solo artist and as half of the multi-platinum-selling pop duo Eurythmics. An inventory of her trophy case — which actually trumps Madonna’s by containing four Grammys, a Billboard Century Award, eight BRITs, a Golden Globe and an Oscar — gives you a sense of how much Lennox has accomplished over the past four solo discs and nine Eurythmics albums. Her ever-evolving sound and image, a transformative template adopted by singers ranging from Madonna to Lady Gaga, is something Lennox considers “a hard-won journey.” It started with her provocative first video for the 1983 hit “Sweet Dreams,” with its controversial androgynous Wall Street–inspired haircut and suit, and was followed by the human-rights anthems “Sisters Are Doin’ It for Themselves” and “Sing.”

And on her latest disc, A Christmas Cornucopia, Lennox treads the same untried and true path. At first glance, the CD appears to be just another gimmicky holiday album, but one listen to Lennox’s layered, celestial vocals on old English carols such as “See Amid the Winter’s Snow” and “The Holly and the Ivy” and you’ll understand why this woman has sold over 80 million records to date. Surprisingly, the disc’s debut single and only original track, “Universal Child,” is Lennox’s first musical composition in over three years.

“What woke me up from my writer’s coma was the fact that I’ve seen some of the most vulnerable children on the planet,” Lennox says, noting that all of the proceeds from “Universal Child” will be going to her eponymous AIDS/HIV charity. Inspired by numerous trips she has made to Africa, the song represents what she calls “the turning point of my life,” which took place during the 2003 launch of Nelson Mandela’s own AIDS/HIV foundation in Cape Town. “Mandela brought me to orphanages, hospitals and homes stricken with poverty and I saw the extent of the [AIDS/ HIV] pandemic,” Lennox recalls. “I don’t view being an advocate as charitable work,” she stresses. “I feel my life has a stronger purpose now, and a big part of that is campaigning for women and children’s rights.”

Lennox is puzzled by women who actually won’t identify as feminists, including young singers such as Shakira. “Why are people backing away from the word feminism?” she asks. “I would love to sit down with women who have an issue with the word. My concept of it is something that you can be so proud of. It’s unfortunate that the label itself has been given such a bad rap,” she adds, before addressing a recent MySpace blog in which she wrote about the issue. “We do need to redefine it. Some men find it intolerable to hear the ideas of strident feminists — the old joke about bra burning, hairy armpits. I think with women heading up corporations today, we are way ahead of that. It’s down to women like myself who are resourceful, have an education and have access to democracy and freedom of speech to help. That’s walking feminism, not talking feminism!”

To keep abreast of what the next generation of women are feeling and thinking, Lennox chats with her two daughters, 19-year-old Lola and 17-yearold Tali (their father, producer Uri Fruchtmann, and Lennox have been divorced since 2000). “We are all big talkers in our household,” she says of her girls. “When you have kids, you begin to see things from their perspective and it can be challenging. My life is not comparable to my daughters’ in any way, shape or form. I come from a different background and my journey is a long road of twists and turns,” she says, referring to her upbringing in the ’50s and ’60s. Lennox lived with her family in a tenement house without a washroom in Aberdeen, Scotland. It was during this time that she became aware of social injustices. She was brought up listening to her grandparents — who were very active in the trade-union movement in Scotland — talk about their plight. “I’ve kept that going. No matter what, the most important thing for me is that [my daughters and I] always maintain a dialogue.”

Case in point? Last year Lola was asked to join the Royal Academy of Music as a soprano. The esteemed institution was coincidentally the same one Lola’s mother attended in the early ’70s. (Lennox reportedly dropped out a mere three days before taking her final exams in 1975.) After months of immersing herself in classical-music studies at the prestigious school, Lola felt the environment to be as stifling to her creativity as it was for her mother. “It was history repeating,” Lennox says. “She didn’t take to it and told me the courses weren’t right for her. I immediately said, ‘That’s cool, I don’t want you to force yourself.’ I didn’t want her to wait another two years to figure out that it wasn’t her thing — like I did!” In contrast, Tali is entering a different reality altogether. “She’s started to rocket in the modelling world,” beams Lennox, listing the catwalks Tali walked during London and Milan Fashion Week — including Burberry, Prada, Missoni and Cavalli. “She’s taking meetings with [legendary fashion photographer] Steven Meisel next!”

Lennox, however, is happy to leave the limelight to her daughters. Other than a few select television appearances to promote A Christmas Cornucopia, she will not follow up her new album with a major publicity blitz. And there’s not a clothing line or perfume launch in sight. Instead, Lennox is once again prioritizing politics over pop music. “I’m looking forward to speaking to people in power in my new role as UNAIDS ambassador,” she says, having already rubbed elbows with the Dalai Lama and Deepak Chopra. “I love music, but to actually do something constructive and make a difference in the world — without faux sentiment — is much more me.”