Treat your anxiety with a new computer program

In today's news: a new cognitive computer program offers hope to anxiety sufferers; no more booty in the bible; a simpler prenatal test for Down syndrome; a plastic surgeon reinvents the breast; and women graduates in the U.S. outnumber men by two million. 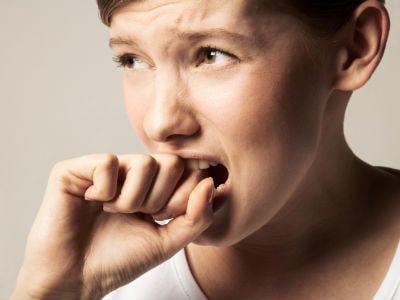 Anxiety is one of the most common mental illnesses in North America, and while talk therapy and drugs have long been available to treat the condition, now a new computer program may offer a third option. Cognitive bias modification (CBM) is designed with the premise that anxiety and depression are caused by unconscious negative biases in thinking. This program works to alter these harmful thought patterns by replacing negative thoughts with more positive soothing ones. So far the treatment seems to work, though larger studies are needed.

Those of us that went to Sunday school likely remember letting out a snicker whenever a passage that contained the oh-so-naughty word “booty” cropped up. But no more. The U.S. Conference of Catholic Bishops has ordered a new translation of the bible, and all incidences of the word “booty” (and there are many) will now be replaced with the word “spoils.” Oh Catholic bishops, can’t you let the kids enjoy just this one ever so slightly naughty double-entendre? We thought not.

A new and simpler test for Down syndrome in pregnancy has been discovered. European scientists have been able to diagnose Down syndrome prenatally by giving a blood test to pregnant women. The current testing method is far more extensive and invasive, and researchers are hoping this new method many soon be approved for general use.

While we ladies are doing everything we can to convince ourselves that we love our bodies just the way they are, one surgeon is throwing that self-love back in our faces by claiming he is reinventing the female breast. Plastic surgeon Gary Horndeski has created a system that creates cleavage and lift without implants by fashioning an internal strap system out of excess skin. Basically, your once droopy breast is held taught by a skin hammock.

In the U.S., two million more women than men graduated from college last year, and the ratios here in Canada are not so different. Some 78 percent of the jobs lost during the recession were held by men, and experts say that many of those jobs – often in fields like manufacturing – are not likely to return. They say this shift in education and employment gender balance will have a profound effect on the economy.