Wayan, Made, Nyoman and Ketut

Heavy metal, temples, culinary delights and cockfights – my last few days in Bali and the people I met along the way 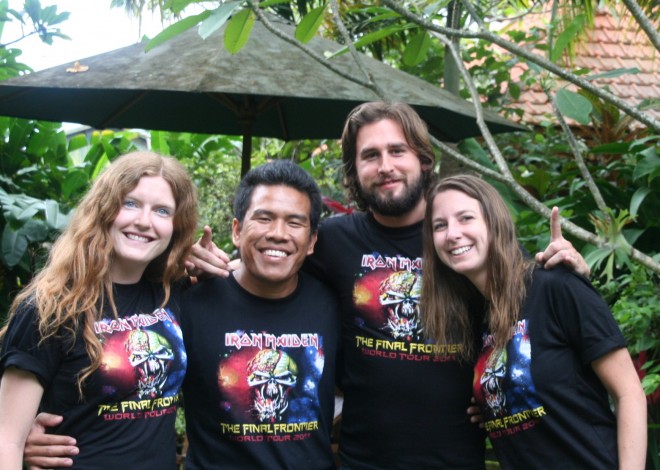 Wayan, Made, Nyoman (or Komang) and Ketut. There you go; pretty much every Hindu person in Bali has now been accounted for.

In this post-Eat Pray Love era, many people come to Bali in search of Ketut, the Balinese fortune-teller featured in Elizabeth Gilbert’s famous novel. In fact, this can be a bit of a task considering a quarter of the elderly population is named Ketut.

A small nugget of Balinese cultural background: If you’re the first-born child in a Hindu family here your first name will be Wayan. The second born will be Made, the third, either Nyoman or Komang and the fourth, Ketut. We actually never ended up encountering a Ketut at all. One of my favourite Wayans explained that “Ketut is kaput” because most Balinese couples cap their number of offspring at two.

Anyways, while I fill you in on my last few days in Bali I thought it only fitting to also talk a bit about some of the people that I met along the way – two Wayans and a Made.

After a horrifically nauseating boat ride back from the Gili Islands we decided to return to Ubud and make that our base for exploring more of the island. We settled on staying at Wahyu Bungalows in the centre of town and were greeted by our first Wayan, the hotel manager, as we checked into our beautiful temple-like room (pictured below). A funny, chatty and inquisitive fellow, Wayan immediately sat us down and asked us all about ourselves, our trip, and our lives back in Canada. The four of us clicked instantly. 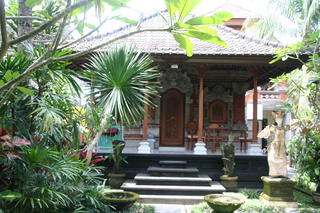 On our way into Ubud we’d passed a billboard announcing the fact that the British heavy metal band Iron Maiden would be playing in Uluwatu, in south Bali, the following night. This band, formed in 1975, isn’t exactly in its prime by North American standards, but in Indonesia they’re HUGE so we knew this was a show not to be missed. We filled Wayan in on the fact that we were planning on heading to the concert and, while lamenting that he couldn’t join us because he had to work, he offered to arrange a taxi to take us sightseeing and then to the concert.

We woke up the following day and met our driver, Made (pronounced mah-day), a diminutive, slightly frightened-looking soul who spoke just a wee bit of English. At first we were slightly annoyed with the little guy when he took us to buy the sarongs we needed for temple-hopping at probably the most expensive place in Ubud, but I’m now convinced that this probably wasn’t intentional.

During our second stop, the ATM machine at a local gas station, Jess’s bank card mysteriously disappeared. After searching the gas station for over an hour, Jess, on the verge of tears, said we might as well give up the search and continue on our way to Uluwatu. Looking at her, Made, looking genuinely distraught, said: “When you are sad, I am also sad. When you cry, I also cry.” It was hard not to love the guy after that. The Iron Maiden show, held at Garuda Wisnu Kencana, which looked like a mountain that had been blown up to make room for a stage surrounded by enormous statues, was bizarre and entertaining beyond what we had even expected – a hair band from the 80s playing to a crowd of elated travelers and Indonesians in one of the country’s most beautiful cultural parks…amazing.

We each grabbed ourselves a souvenir concert t-shirt and picked an extra one up for Wayan. We presented him with the shirt the following day at breakfast. He’s worn it every day since.

The missing bank card also resurfaced. Made called our hotel from the car and Wayan went immediately to the police station and the bank in Ubud. Turns out the ATM had eaten the card so, after it was removed from the machine’s bowels, Jess was able to get it back.

While Jess was happily retrieving her card the day after the concert, Craig and I decided to make a trip into Kuta to go surfing. Once a Balinese hotspot, Kuta’s reputation is pretty much in the toilet these days with too many chain stores and a seedy nightlife. We knew this but decided a day trip wouldn’t be so bad. This is how we met our second Wayan. He drove us to Kuta telling us about his family and life in his small village on the outskirts of Ubud and after our day at the beach (which was actually pretty nice except for the fact that some garbage got tangled in my hair when I went in the water) he took us to a cockfight. These events are integral to religious life here in Bali. They’re held outside village temples to entertain the gods and the blood from the losing birds are used as offerings.

When the actual “fight” got underway I couldn’t see beyond the crush of men gathering around the ring, but I knew it was over when I heard a muffled moan. Wayan Number Two bet on the wrong bird so we high-tailed it out of there before any of the gore was visible. 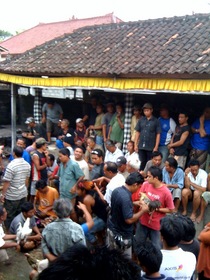 We spent our final days in Bali visiting the island’s many temples, relaxing, and learning how to cook the unbelievable Indonesian dishes we’ve been scarfing down for the past two weeks.

When I look back at the photos I took while I was here, I’ll definitely recall the beauty of this place but, pictures aside, I think my most vibrant memories of Bali will be of the people I met here. Always smiling, welcoming and eager to help out, this really is a place where the people are a direct reflection of their surroundings.