The absolute best spots in Toronto for breakfast lovers

Whether you’re in the mood for something sweet, savoury or vaguely Swedish, we’ve got you covered.

In partnership with Tourism Toronto

Waking up with the birds doesn’t just make for a full day of exploring Toronto’s neighbourhoods — it also means beating the crowds to the city’s finest breakfast spots.

A public market has stood, in some shape or form, at this spot near Toronto’s lake since 1803. In the intervening years, St. Lawrence Market has had its share of setbacks — ravaging fire! Basement prisoners in revolt! Turn-of-the-century total demolishment! — but it remains a spectacular place to load up on groceries. Fully-cooked breakfast options abound, too: Carousel Bakery’s peameal-bacon sandwich is a local legend; Yip’s Kitchen offers dim sum staples like steamed barbecue-pork buns; and the bakers at St. Urbain pull plump, chewy bagels straight out of a wood-burning oven. Picnic tables line three sides of the market, so you can usually finagle a seat. stlawrencemarket.com. 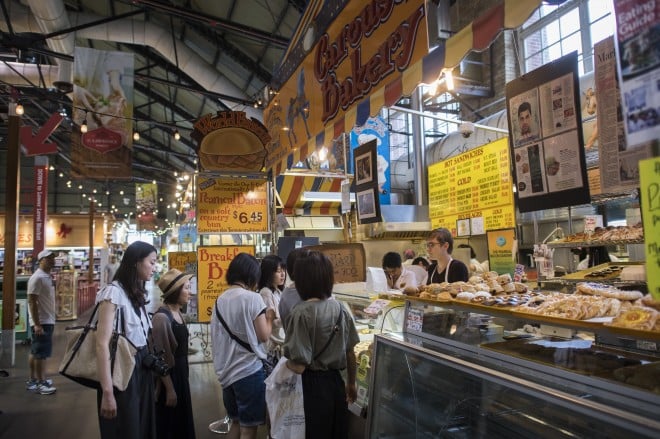 A breakfast crawl through Leslieville

Snagging a breakfast table in this east-end neighbourhood, where young families have made homes in low-slung fixer-uppers, can be something of a competitive sport. That’s especially true at Lady Marmalade, which has been serving up Mexican classics like huevos migas and imaginative riffs on eggs benny for seven years. Don’t hesitate to bring your gluten-free pals, who will find ample options on the menu. But do get there early — the place opens at 8 a.m. and a line snakes outside soon after. Bring cash, too: That’s all this spot takes. ladymarmalade.ca.

For the past two decades, Bonjour Brioche has provided Toronto with both the charm and the first-rate croissants of a French patisserie: There’s a bittersweet chocolate version, a flaky almond one and a nutty cheese croissant with gruyere and béchamel baked straight into the dough. Croque madams and air-light Provençal omelettes are especially popular choices with patrons camped out on the side patio, where a heat lamp encourages outdoor dining long into the fall. Cash-only here, too. bonjourbrioche.com.

Detour north to Gerrard for a seat at Saturday Dinette, where chef and owner Suzanne Barr can be found flipping burgers and frying chicken to a soundtrack of De La Soul (sometimes with her young son stationed in a nearby crib). Brunch delivers plenty of pleasures, from the cheesy, porky Little Reuben to the buckwheat pancakes dripping in maple butter to the fluffy chive biscuits with white gravy. And if you’re looking for a little hair-of-the-dog to chase last night’s festivities, a trio of all-day cocktails are available, as well. saturdaydinette.com.

Once you’ve filled your stomach, consider tracking down items to fill your home. Good Neighbour stocks adorable glasses, towels, candles and jams (in addition to clothing and a killer wall of New Balance sneakers). Arts Market supports the photography, housewares, refurbished antiques and jewellery of more than 50 independent vendors. And Gadabout Vintage might keep you browsing for hours, with tens of thousands of knick-knacks, cameras, textiles and trinkets, plus dresses that date back to Edwardian times. goodnbr.com, artsmarket.ca, gadaboutvintage.com. 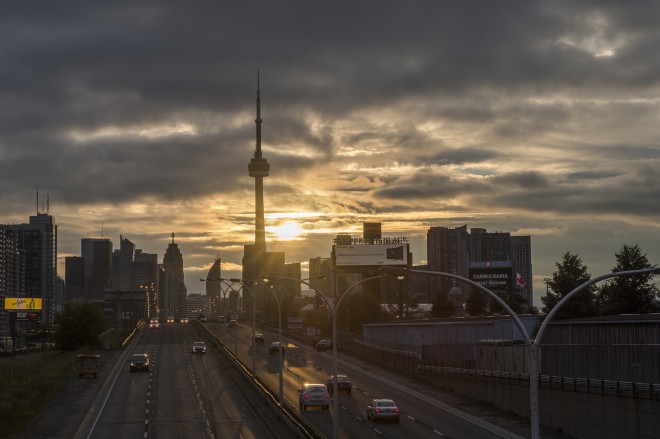 The first challenge at Maha’s, an affable Egyptian café owned by Maha Barsoom and her two kids, is deciding what to order. The “mind-blowing chicken sandwich”— shawarma-esque chicken loaded with homemade mayo and tahini — does not oversell it, and the “pharoah’s po’ boy” stuffs a charred pita with tiny, battered shrimp. (There’s an equally delicious fried-cauliflower version, as well.) The second challenge is finishing all that food. mahasbrunch.com.

Walk off some of it through Little India, a half dozen blocks on Gerrard between Greenwood and Coxwell, first populated by South Asian families more than 50 years ago. The strip boasts shops, cafes, clothing stores and restaurants whose owners immigrated from India, Pakistan, Bangladesh, Afghanistan and Sri Lanka; it’s a particularly wonderful place to visit in late October, when the neighbourhood celebrates Diwali, the festival of lights.

Sunrise in the west end

There might be lovelier places in the city to watch the sunrise — at Woodbine Beach, it lifts over the water; at Cherry Beach, it peeks up from the trees of Leslie Spit — but the view from the Dufferin Bridge seems so incontrovertibly Toronto: The Gardiner Expressway cuts a path between cranes, condos and skyscrapers, while the C.N. Tower begins to glow in orange and yellow light. Once you’ve had your fill, head to Mildred’s Temple Kitchen in nearby Liberty Village, former home to Victorian industrial factories (and a ladies’ prison). Opt for the starches here: The buttermilk pancakes and currant scones are both terrifically fluffy, while the grilled-cheese sandwich brings all the requisite gooiness. templekitchen.com. 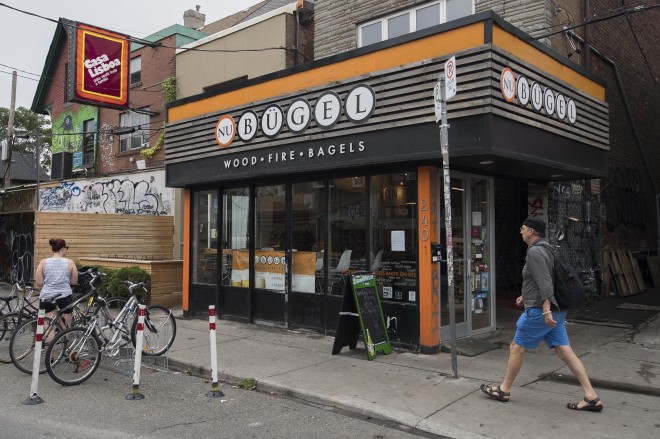 A breakfast crawl through Kensington

Once a home for British cavalry troops, then for Eastern European Jews, then American draft dodgers, then Asian immigrants, Kensington Market charged into the 21st century as one the city’s most unique and lively neighbourhoods. Breakfast options reflect its diverse nature: At Nu Bügel, lox and cream cheese, New York–style pastrami or smoked trout is sandwiched between a wood-fired bagel, while at the Swedish Café Fika, you can try brie-and-blueberry grilled cheese or avocado toast. If it’s late morning, head to The Dirty Bird for deep-fried dark-meat chicken on a maple-buttered waffle, the whole shebang drizzled in hot sauce, or to Rasta Pasta for extraordinary jerk chicken over Jamaican rice and peas. nubugel.com, thedirtybird.ca, fika.ca, eatrastapasta.ca.

Next, wander among and into the vintage-clothing stores — there are many — and then pick up something for the road. Good Egg has a well-chosen selection of cookbooks, housewares and handy wooden spoons, while House of Spice has every oil, nut, rice and aromatic you can imagine (and a bunch you cannot). Or else just make a beeline to Casa Acoreana, which started off in the ’60s as a grocery store but now boasts one of the most delightful candy counters in town. goodegg.ca, ehouseofspice.com, casacoffee.ca.