From open-mic night to a drop-in trapeze class: Toronto for adventurers

The city offers a lot for thrill-seekers — even if hanging off the edge of the CN Tower isn't your cup of tea. 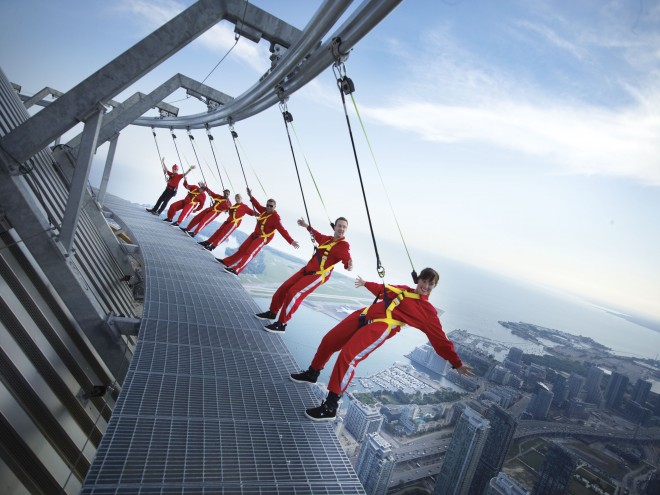 Why not take a stroll along a ledge perched 356 metres up from the ground? Photo, courtesy of  CN Tower EdgeWalk.

In Partnership with Tourism Toronto

Whether your adventurous spirit is best served by knee-shaking heights, calf-aching runs, or (shudder) heart-pounding open-mic nights, Toronto has plenty of activities for the bold and the brave.

Walk on the CN Tower’s edge

It used to be that if you were looking for thrills at the CN Tower, you were limited to a couple good jumps on the main pod’s glass floor. And then, in 2011, the brass at the world’s second-tallest freestanding structure thought, “Huh, how about we just let folks wander around outside the pod instead?” It’s difficult to overstate how truly bananas this attraction is: You and your likeminded adrenaline junkies hook onto an overhead safety rail, and then you take a stroll along a five-foot-wide ledge that’s perched 356 wind-tossed metres up from solid ground. Want to hang your toes over the edge? That’s cool! Want to lean, Titanic-style, with your chest out above the city? Go nuts! (You’re nuts.) But for those who delight in heights, EdgeWalk provides a panoramic, better-than-bird’s-eye view of Toronto. Edgewalkcntower.ca.

Whether you’re simply looking for a way to increase your fitness level or seriously looking for a career under the big top, the Toronto School of Circus Arts has a program for you. Classes include aerial arts (straps, silks, and hoops), ground arts (handstands, acrobatics, and Chinese poles), and flying trapeze — in fact, the school also offers drop-in trapeze classes, if you first want to dip a toe into those dazzling mid-air maneuvers. And yes, rest assured, there are safety nets. Lots of them. Torontocircus.com. 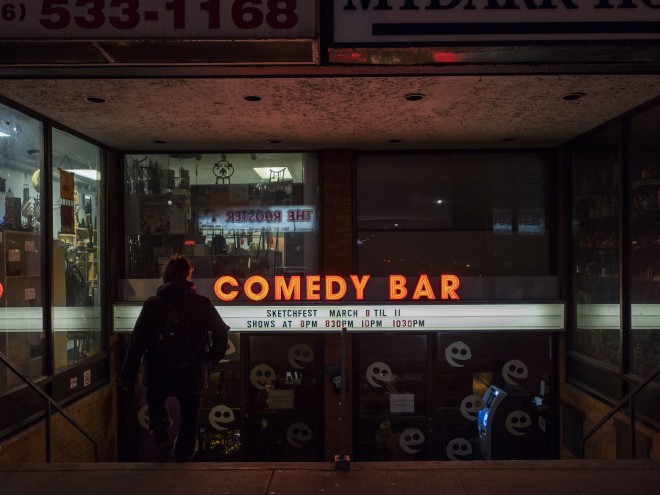 Test your nerves and your comedic prowess by taking mic in hand at Comedy Bar. Photo, Arthur Mola.

Grab the mic at Comedy Bar

Any fool can cartwheel through the air or hang off the edge of the CN Tower. It takes a profoundly adventurous soul to stand up in front of a bunch of comedy pros and try to crack jokes. If, however, you are ready and willing to risk not life, not limb, but total mortification, then get down to the Comedy Bar on Tuesday nights. For the first hour, honest-to-goodness comedians will work out new material, but after that, a lottery determines which novices can take the stage. Good luck. And if you bomb, know that Comedy Bar also holds workshops for aspiring stand-ups. Comedybar.ca. 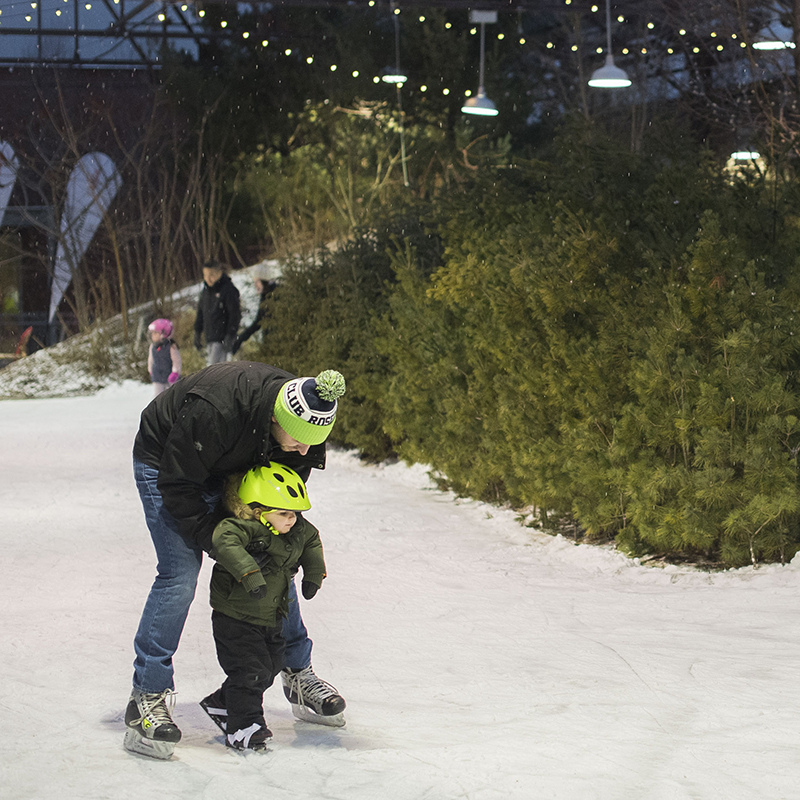 The best kid-friendly spots in Toronto that parents will love, too

The Martin Goodman Trail stretches 56 kilometres along the waterfront, connecting the highly Instagrammable Humber Bay Arch Bridge in the city’s west end with the equally gram-worthy Rouge River in the east. But you’re not here to take pictures (and you don’t actually want to bike all the way to Rouge River): You’re here to work up a sweat, and then reward that sweat with quality beer. If you’re biking west, finish your ride on the West Toronto Railpath, which’ll take you to Henderson, a neighbourhood brewery named after the city’s first brewer. Each month, they release a new set of suds, like a black IPA with raspberries or a grapefruit radler. Heading east instead? Get off just past the Don Valley Parkway and make your way to Left Field Brewery. Opened by a local couple, the microbrewery serves porters, saisons, and IPAs with cute baseball-inspired names. (6-4-3 — the most common double play — is our fave.) Leftfieldbrewery.ca, hendersonbrewing.com. 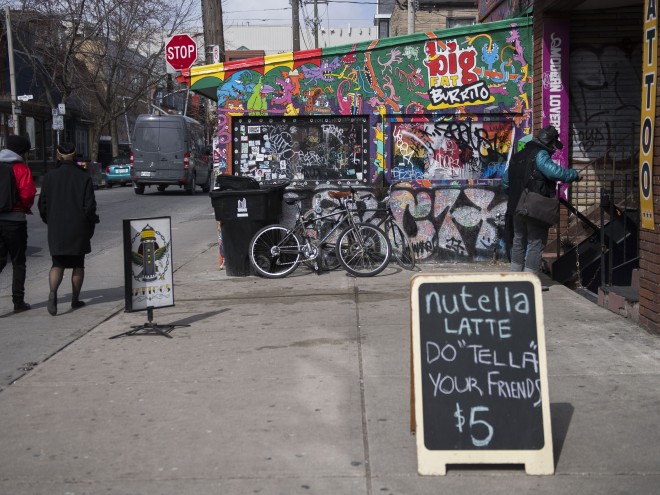 Eat basically everything in Kensington

Kensington Market was once home for British cavalry troops, then for Eastern European Jews, then American draft dodgers, then Asian immigrants — so it makes sense that there’s a bunch of different cultures woven through this neighbourhood. It also means that Kensington is a very good place to answer a crucial question: How many different kinds of food can you shove in your mouth in one afternoon? There’s fried chicken (The Dirty Bird), jerk chicken (Rasta Pasta), Texas-style barbecue (J&J Bar-B-Que), Hawaiian-style poke (North Poke), tacos (Seven Lives), arepas (El Arepazo), Belgian-style fries (Moo Frites), Berlin-style döners (Otto’s Berlin Döner), tortas (Torteria San Cosme), pizza (Pizzeria Via Mercanti) — and that’s before factoring in the ice cream, crepes, popcorn, and cupcake sundae sandwiches for dessert. Be bold, be unapologetic, and bring napkins.

The Leslie Street Spit is an ideal spot for the sort of nature lovers who prefer a healthy dose of city mixed in with their nature. It’s a 500-hectre bird sanctuary carved out from what was meant to be a manmade breakwater — so while there’s plenty of cottonwood trees, wildflowers, and waterfowl to be found, there are also loads of discarded bricks, concrete hunks, and rebar. (East-side snack bar Pinkerton’s salvaged many of its industrial pieces from here.) Run the 5k from the Spit’s entrance to the lighthouse at its edge, then forage for urban treasure among the rubble on your route back. Sunset offers a stunning view of Toronto’s skyline. Tommythompsonpark.ca.

More:
The real health benefits of ginger
10 totally fabulous pairs of plus-size jeans for every budget
8 great late-night spots to hit up in Toronto