Lost in inebriation, found in translation

In less than 72 hours in Tokyo I managed to eat a heart in an alleyway, lose my iPhone, enjoy raw fish for breakfast, discover that sumo is a great hangover cure and make two amazing new friends 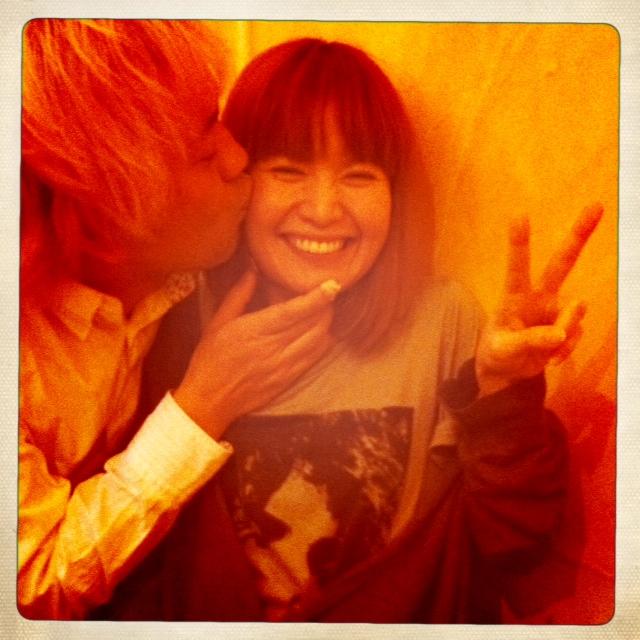 Tokyo is a fascinating place: Enveloped in a cacophony of robotic sounds, entangled in a maze of subway tracks and the only place I’ve ever been where at any time of day you can grab a piping hot can of creamed corn to drink from the vending machines on virtually every street corner.

Then there are the people. By yourself you can experience any of the above and delight in Japan’s uniqueness, but it’s the people that really make this place special.

Throughout our three days in Tokyo (a short stop because it’s extremely expensive), people kept appearing out of the woodwork ready to help us out, whether it was to assist with translation or offer directions. That’s how we met Fujii.

After a nine hour flight from Honolulu, Craig and I exited Shinjuku station completely clueless. We were fumbling with a barely-legible map trying to find at least one landmark. That’s when he appeared. He noticed we were lost, asked if we needed help and promptly called our hotel from his cell to find out exactly where it was. Then he walked us to the hotel and gave us his business card saying he’d call our room in a few hours and tell us where to meet him so that he could show us some of his favourite places to party in Tokyo. A few hours later the plan was set and we boarded the subway to Shimokitazawa, a tiny part of the city with small cramped alleys crammed with tiny bars, to meet Fujii and his girlfriend Shuko (pictured above).

They instantly greeted us with a hugs and we set out for our first stop: an open-air, standing-room-only yakitori restaurant where Fujii handed us a selection of mystery meat skewers. The first was definitely liver. The second was definitely not something I recognized. When I asked Shuko what it was she pointed to her heart and smiled. So began the bar crawl.

Next was a stop at Peach Boy where we listened to vinyl records and chatted with the bartender (via Fujii), then on to an Okinawan restaurant/bar where we drank beer and ate “sea grapes” (some sort of nodule-covered seaweed that popped in my mouth when I chewed it…pretty tasty actually) and Fujii taught Craig (who is a musician) how to play a traditional Okinawan guitar. Then tequila shots at a rock bar, shochu, more beer, and stops at two more bars called Eat a Peach and Trouble Peach. That’s where things get a little fuzzy.

The only reason I actually remembered the names of the latter Peaches at all the next morning is because I woke up with matches from these establishments in my purse. Unfortunately some of the contents of my purse were missing – most notably my iPhone. Not cool. 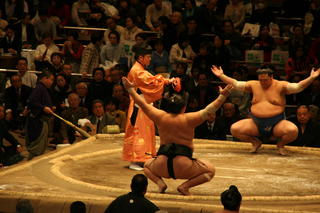 Turns out sumo wrestling matches are a fantastic place to be when you’re feeling lazy and hungover. Instead of seats you plunk yourself down in a little corral – a sort of pen lined with pillows so you can lie down or even sleep like this guy next to me was doing when we first arrived. 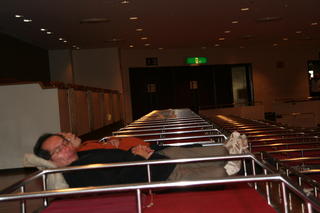 Then when you wake up you can fill your pen with Sapporo, sushi, cheeseburgers or little cookies with the face of your favourite sumo wrestler (or the yokozuna himself) on them while you watch the action (which actually moves quite slowly – the wrestlers’ intimidation tactics and preparation take twice as long as the actual bout).

After the match we returned to our hotel so I could try and figure out what became of my phone. We got back in touch with Fujii, who called the taxi company AND bars from the night before, to no avail. I figured my last hope was to call the front desk to see if it had turned up and if not it I would have to accept that it had become the casualty of an unforgettable night in Tokyo. Well, turns out I must have dropped it when I stumbled out of the cab because the front desk clerk said that they indeed had my phone. It was turned in by the night watchman who found it on the ground. Unbelievable! Only in Japan!

We decided it would be in our best interest to stay in that night so that we could make the most of our third and final day in Japan.

On our last day we woke up early and hit the Tsukiji Fish Market. I’ve never seen anything like it. Every type of sea creature imaginable (including quite a few that I couldn’t have even fathomed like these giant mussels the size of my forearm) was up for grabs. We wrapped up the tour of the market (at 8:30am) with a sushi breakfast. The market is only open until about 9am so the only way to experience the world’s freshest sushi is to eat it for breakfast. I’ve got to say, Craig really took one for the team during this outing eating both the raw octopus sashimi and the salmon roe sashimi that turned up in front of us…I was a wimp and stuck to tuna and cooked conger eel. 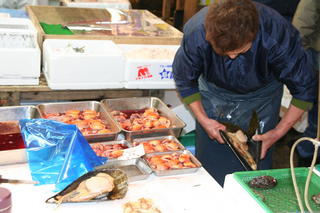 We didn’t get a chance to meet up with Fujii again, but we’ve been in touch via email so I’m confident that we’ll see each other again someday.

During that one unforgettable night in Shimokitazawa, Fujii explained that part of the reason he decided to help us out and make sure that we saw his favourite places in Tokyo was because years ago he had been traveling around Europe and the States alone and no one bothered to approach him at all. After weeks by himself he was consumed by loneliness and vowed that he wouldn’t let other travelers experience that feeling if he could help it – sort of a pay it forward mentality. He made us promise that if we ever ran into a lost Japanese traveller back in Canada that we’d to show him or her a good time.

Even if I never see Fujii again, that’s one promise I’ll keep. It’s a small commitment to make in return for all he gave us.