Hoi An, Vietnam: The promised land of a zillion tailors where reinventing your wardrobe in 24 hours for a few hundred bucks is simple as can be...the journey to get here proved quite the opposite 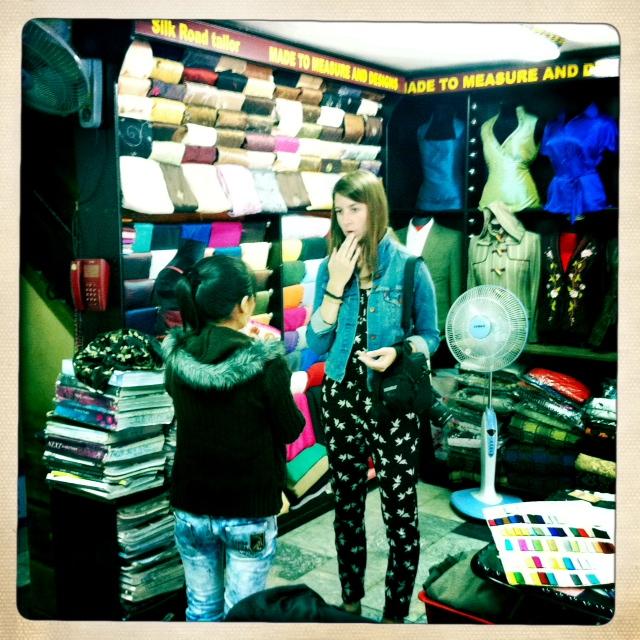 Friends, I’ve made it to mecca: Tailor town…otherwise known as Hoi An, Vietnam.

Cries of “What you like? I make for you! Many colours!” echo from every storefront in this glorious place where everyone you meet is a seamstress, a shoemaker, or the best friend or sibling of one or the other.

Competition for business is tight in this small town, but to spite near constant harassment to “come see my store” this place is still a shopaholic’s paradise. The Hoi An tailors are master copycats – show them a magazine photo, a picture online, or give them the clothes off your back to replicate, select your fabric and they’ll take your measurements and turn your garment around in 24 hours. Made-to-order jackets run about $35 and dresses about $50 depending on the quality of the fabric.

I’ve already had a pair of jeans, three pairs of shoes and a kimono jacket (roughly ripped off from one I saw Florence Welch wearing in a British fashion mag) made, but we’re scheduled to be here for six days so I’m sure by the time we leave I’ll have produced an entire spring collection.

Thankfully our experience here in Hoi An has been quite pleasant because, I assure you, getting here was not.

Whether it was due to Craig’s last minute club sandwich craving or the supreme dearth of taxis in Hanoi, we didn’t have enough time to grab a cab to the train station on the day we were scheduled to depart, so, fearing we’d miss our train, the hotel manager at the amazing place that we were staying in Hanoi wrangled up the cook, the bellboy and the security guard and told them to grab their motorbikes. I hopped on the back of the manager’s bike, Craig got on with the bellboy and the cook and the security guard each took one of our backpacks and off we scooted towards the train station.

I’ve never been so terrified in my life. My legs were shaking uncontrollably as we weaved in and out of the traffic that was coming at us from every direction. The hotel manager was texting his employees while driving and, on top of that, each time he’d see a police checkpoint he’d yell “get off here, run to the next block and I’ll pick you up.” I didn’t have helmet, you see, and apparently that is the one and only traffic law that is actually enforced in Vietnam.

All this and we made it to the station just in time to see the train pull away.

Turns out our tickets on the new and luxurious “tourist train” were non-refundable, but because he was unable to get us a taxi the hotel manager offered to pay for one of our tickets on the other less luxurious train that left later in the day. We obviously accepted his generous offer and returned to the station (this time in a taxi, thank god) a few hours later.

Well, thankfully I stocked up on anti-anxiety medication before I left on this trip because the alternative to the tourist train was more like a rolling crime scene. Some sort of blood-like spatter was smeared across the filthy walls and I needed galoshes to make it to the toilet.

I was thoroughly tranquilized for about the first 10 hours of our 16-hour ride, but when I woke up during the stop in Hue (it was hard not to stir when this train stopped because for some reason whenever the conductor hit the brakes all of the train cars smashed together and jolted you across your berth) and the two locals sharing our cabin departed, four members of the train staff moved in and used our bottom bunks as a lunch room all the while pointing and laughing at us perched up on our top bunks.

Needless to say I was overjoyed to get the hell off the train in Danang and into a taxi to our hotel in Hoi An.

The pilgrimage to the birthplace of clothes was trying, but now that we’re settled in production of my spring wardrobe is coming along quite nicely (check the photo below of my crazy kimono top, new strappy heels and the jeans I had copied from one of my favourite pairs for $25). 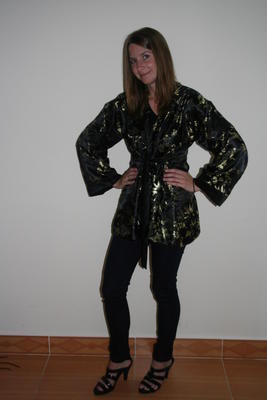 Now the only thing I need to worry about is getting all of my garments made before the tailors go on holiday for Tet (Vietnamese New Year and the day when EVERYONE in the country celebrates their birthday).