How a Toronto teen is connecting girls in Canada and Kenya

A new book collects letters between Toronto teens and their pen pals in a Kenyan refugee camp. Its impressive author, Clare Morneau, is only 17. 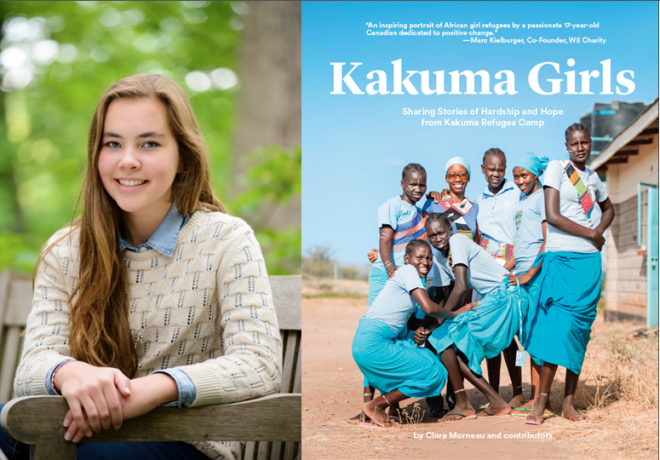 Two years ago, 17-year-old Clare Morneau started a letter writing project to connect students at Havergal College in Toronto with students at the Morneau Shepell Secondary School for Girls in Kakuma Refugee Camp in Kenya. (The camp houses 181,000 people from Somalia, Ethiopia, Sudan, South Sudan, DRC, Rwanda, Burundi, Eritrea and Uganda, 55 percent of whom are kids.) In, Kakuma Girls, which launches today in time for the UN’s International Day of the Girl Child, Morneau shares the stories of the refugees and the strong bonds they’ve formed with their Toronto pen pals. (The proceeds go toward helping girls in Kakuma receive University educations.) Chatelaine spoke to Morneau about what she’s learned from her friends across the world, why teenage girls are all the same and that time she met Justin Trudeau — and he remembered her name.

How did the idea for this project come about?
The company my dad used to work for, Morneau Shepell, had opened this girls school in Kakuma Refugee Camp. I’m a teenage girl going through high school in Toronto, and I thought it would be interesting to learn more about what it’s like to go to school when you’re living in a refugee camp. I thought letters would be a good way to do it because it’s the easiest way to communicate because email access isn’t guaranteed in a refugee camp.

What surprised you most about the letters?
Seeing how girls in Toronto are feeling the connection is really heart warming. My friend Steph and her partner Christine have been talking for a year and a half now, and you can tell that they’ve bonded. Christine is an orphan and she often feels like she doesn’t have any support, and Steph tells her not to give up because people do care about her. Refugee girls are still teenage girls — they like playing soccer, writing, debating. They have a lot of the same aspirations that my friends and I have: they want to be engineers, pilots, models. It’s one of those things where, yes, there are a lot of differences, but I love that the letters remind us of our similarities. 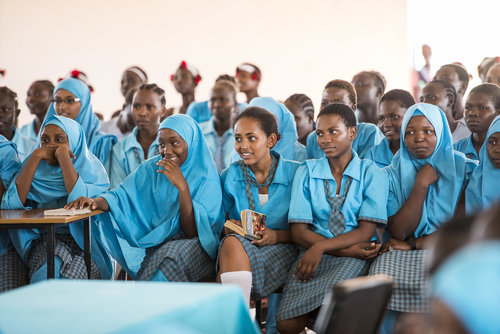 You go to a private school and have so many opportunities. Has making this connection with the Kakuma girls ever made you feel guilty about your own privilege?
It’s definitely hard to realize that you’re so lucky and there are people out there who have so little—they struggle to get sanitary pads. It blows your mind. I try to remember how lucky I am to be getting my education. I think you come away with the feeling that, because you’re so lucky, you have to help them.

Have you had a chance to visit the school?
I went to Nairobi last February with the UN. I was supposed to fly into the refugee camp and visit the school and the girls. But then there was a suspected terrorist threat from Al-Shabaab against westerners and UN workers entering the camp, so it was too dangerous. I was pretty devastated, but the UN flew five of the refugee girls to Nairobi, so we could spend time together. It was surreal to see them in person after talking to them through letters and Skype. It was like seeing an old friend after years apart.

A lot of teenagers want to spend their summers relaxing and hanging out with their friends. You did an internship at the UN in Geneva.
It’s actually called The Global Humanitarian Lab, which is a partner organization with the UN. I decided to do the internship because it was a chance to get experience in the areas that I’m already interested in—looking at women’s and girls’ empowerment in refugee camps and exploring solutions. It seemed like a good opportunity to learn about these things that I might actually be able to implement for the Kakuma girls.

Related: Why teen girls are the most vulnerable group on earth

You are such an impressive young person. I’m sure a lot of parents want to know what your parents did right.
Ha! My parents have always really believed in giving back. When we were little, we had the piggy banks with save and spend [slots], and we’d choose a cause and donate the saved money. Every Christmas we would pick a gift from the World Vision catalogue.

Your dad is Canadian Finance Minister Bill Morneau. Does having a finance minister dad make you responsible with money?
Well I am pretty responsible, but I’m not sure if it’s necessarily my dad because my brothers are a little bit less responsible. I think it’s just my nature.

Can you see yourself getting into politics?
Maybe. I love the idea of having a job where you can actually make real change and make people’s lives easier or better.

Speaking of politics, I noticed that your Facebook profile pic is you and Justin Trudeau. What was he like?
That was taken at a liberal fundraiser. He was very nice and he has this ability to remember everyone’s name, which really makes you feel like you have a connection. It’s very easy to have a conversation with him. My older brother was asking him about policies and he answers in a way that’s very easy to understand for teenagers, which is great.

More:
Elastic-waist pants you’ll want to wear out out of the house
The orgasm shot: Why women are injecting blood below the belt
Sarah Jessica Parker’s new show is a bleak look at modern marriage