Anyone who follows this blog knows there's no shortage of inspiring women making headlines in the daily news. Here are five women that captured our attention like no one else in 2010. 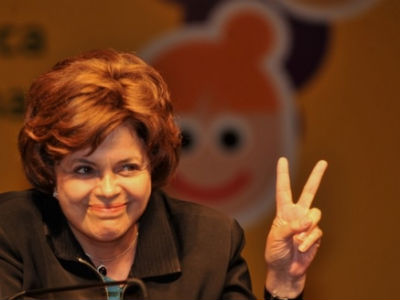 Anyone who follows this blog knows there’s no shortage of inspiring women making headlines in this past year’s daily news. Here are five women that captured our attention like no one else in 2010.

Oprah’s no stranger to the public’s attention, but now that she’s decided to call it quits on her 25 year run as the host of television’s most-watched talk show, we just can’t get enough of her. The timing is not random: Oprah’s new television network OWN will launch this coming January, and she’ll have her hands full nursing the new project through its infancy. Never one to disappoint, Oprah’s making her final season an over-the-top extravaganza. She’s featured incredible interviews, bountiful “Favourite Things” episodes, and an all-expenses paid trip to Australia for 300 members of a very lucky studio audience. Oprah won’t be hosting her last show until September, so we can look forward to another year filled with Oprah-related headlines and a final episode the likes of which we dare not even imagine.

Before she was elected Brazil’s first female head of government on October 31, Dilma Rousseff was a guerrilla, prisoner, torture victim, energy minister and the former president’s chief of staff. Her story is one of perseverance: after being incarcerated and tortured in the ‘60s ad ‘70s for her leftist political beliefs, Rousseff eventually entered mainstream politics. She quickly worked her way up the ranks and eventually became the right-hand lady of President Luiz Inacio Lula da Silva. Rousseff was his endorsed replacement when last term came to an end, and on Halloween of this year, Rousseff was elected Brazil’s first female president. She doesn’t get sworn in until January 1, so her tenure is as yet unproven, but if her past exploits are any indication, we can expect great things from Lula’s right hand lady in the years to come.

She’s been on our radar since 2001 as the on-again off-again girlfriend of king-to-be Prince William, but it wasn’t until November 16 that the beautiful young Brit became a household name. That’s the day her beau made the announcement that the two will finally wed. It’s set to be a humdinger of a royal wedding, the likes of which we haven’t seen since Diana and Charles tied the knot. The date is set for this coming April 29, and promises to be the beginning of a very different existence for Kate, who can look forward to a life in the headlines once she’s married to Britain’s elusive heir to the throne.

If you’re one of the millions of the people that watched The Social Network this year, you’ll never guess that Facebook’s chief operating officer is a woman. The hit film chronicles the early days of Facebook, and portrays its creator Mark Zuckerberg as an antisocial misogynist. How much truth is in that portrayal is up for debate, but what is not up for debate is the fact that these days, Zuckerberg is heavily dependent on one very intelligent powerhouse of a woman: Sheryl Sandberg. The 41-year-old Harvard graduate worked for the World Bank, the Clinton administration and Google before joining Zuckerberg at Facebook in 2008. Since then, she’s been the woman behind the meteoric rise of the internet’s most popular social networking site, and perhaps the biggest thing to happen on the web since it came into existence. With over 550 million members and growing, Facebook is arguably the most powerful website on the internet, and Sandberg is the woman in charge of making sure everything runs smoothly. So far she’s done a bang-up job, to put it mildly. Expect to hear more for the woman that Time’s Person of the Year can’t live without.

When Iranian woman Sakineh Mohammadi Ashtiani was charged with adultery in 2006 and sentenced to death by stoning, she never could have guessed her story would become international news. Iran’s judicial system still doles out the sentence of death by stoning, and Ashtiani has found herself at the centre of an international campaign to end the archaic practice. News outlets and human rights organizations around the world picked up her story early this year and have been fighting to have her sentence overturned ever since. Protest occurred in cities around the world in July, and in September, Iran’s foreign ministry announced it would suspend the stoning sentence, until her case – based on a confession she made while being tortured – has been reviewed. Despite international support (more than 80 celebrities signed an open letter in mid-December pleading for her release), Ashtiani’s plight is far from over. The Iranian authorities are now attempting to implicate her in the murder of her husband, and the new year will likely bring renewed calls for the release of the woman who has become Iran’s most famous prisoner.