Fall for our favourite seasonal flicks 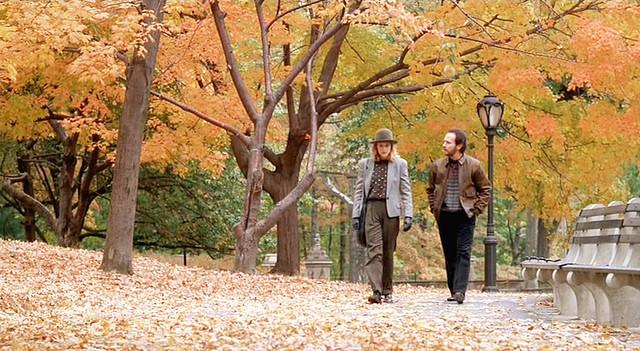 With the vibrant colours of the changing leaves and the chance to style characters in cute hats, chunky knit sweaters and woollen scarves, it’s no wonder so many films are set during autumn. If you’re in the mood to soak up a little of the season’s ambience, cozy up with a mug of apple cider, a blanket (or a Snuggie—we won’t tell!)  and fire up one of our favourite fall flicks.

1. When Harry Met Sally: The classic romantic comedy that raised the million dollar question: Can men and women ever just be friends? will leave you longing for a leisurely stroll through Central Park in autumn and humming along to the Harry Connick standards on the soundtrack.
Best autumn scene: Sally in her tweedy blazer, gloves and black bowler, sharing her faceless-guy-ripping-off-her-clothes fantasy with Harry in leafy Central Park.
Best sweater scene: Sally and Harry are both dressed in charcoal knits when she fakes an orgasm—to hilarious effect—in a crowded New York deli.

2.  Hannah and her Sisters: Starting and ending with the Thanksgiving holiday, this Oscar-winning Woody Allen film centres on the complicated romantic entanglements of three sisters in a theatrical family on New York’s upper west side. Like many of the director’s classics, it features a neurotic performance by Allen himself, witty dialogue and, of course, adultery.
Best autumn scene: The film features many images of a crisp New York autumn, including the scene when Mickey (Allen) recounts his existential crisis to Holly (Dianne Wiest) while they walk through Central Park.

3.  Dan in Real Life: Steve Carrell is Dan, a widower and single dad who falls in love with his brother’s girlfriend, Marie, (played by the wonderful Juliette Binoche) over the course of an annual family weekend get-together. You’ll covet the rustic family cottage and swoon over the serene Rhode Island scenery, not to mention Dane Cook in skin-tight workout gear.
Best autumn scene: When the Burns clan take part in that uber movie tradition—a family game of touch football, which ends up with Dan tackling Marie and, well, quite enjoying it.

4.  St. Elmo’s Fire: This 80s brat pack classic features Demi Moore, Judd Nelson, Emilio Estevez and Rob Lowe as a group of college graduates trying to cope with adulthood and their struggles with unrequited love, infidelity, unemployment and romantic triangles.
Best autumn scene: On a crisp fall Saturday, the gang drives through the leafy streets around Georgetown University in a jeep and, Alec, the aspiring politico, hints that he’s becoming a Republican. The scene ends with the group’s catch-phrase–Boogida, Boogida, Boogida, ah, ah, ah!

5. Autumn in New York: This May-December drama surrounds the ill-fated romance between commitment-phobe Will (Richard Gere) and winsome Charlotte (Winona Ryder), who’s terminally ill. Warning: at times the performances are sappier than the fall maples in Central Park!
Best autumn scene: When romance blossoms as Will and Charlotte stroll amidst the falling golden leaves in a NYC park. (The runner up: the opening scene which is a bird’s eye view of the fall colours in Central Park.)

6. The Village: Set in an isolated turn-of-the-century Pennsylvania village surrounded by a foreboding forest, this story from scaremaster M. Night Shyamalan centres on a community trying to escape the outside world and the frightening creatures in it. As with all M. Night movies, watch for the surprising twist.
Best autumn scene: The nail-biting fall night when the villagers, aglow in candlelight run from “those we don’t speak of” and Ivy (Bryce Dallas Howard) waits, shaking, with her hand out of her front door for the creature in red.

7. Stepmom: This sentimental tearjerker centers on the complex relationship of a dying mom Jackie (Susan Sarandon), her ex-husband’s much-younger girlfriend Isabel (Julia Roberts) and the children they both love. Make sure to have plenty of Kleenex handy.
Best autumn scene: In the leaf-strewn backyard of the spectacular family home, Isabel, suspecting that Jackie is planning a move to the West coast with the kids, confronts Jackie and discovers her true secret.
Best sweater scene: This film takes top prize for best autumn costuming! In practically every scene, Jackie (Sarandon) dons cozy colourful sweaters and scarves, suede jackets and riding boots and Isabel (Roberts) wears turtlenecks, funky knit caps and camel coats.

8. Dead Poets Society: Set at a conservative boys’ prep school in 1950s New England, this Peter Weir drama features all of the hallmarks of fall: back-to-school nerves, football games and gorgeous foliage. In a rare understated role, Robin Williams plays the unconventional English teacher John Keating who inspires his students to Carpe diem (“Seize the day”).
Best autumn scene: Nothing says fall like parents saying goodbye to their children on the first day of school so it has to be the opener, a beautiful New England day and the start of a new school year at Welton Academy.

9. One True Thing: Upstate New York in autumn is the idyllic setting for this touching family drama. It stars Renée Zellweger as a self-absorbed reporter who grudgingly abandons her career to return to her hometown to care for her dying mother, a lovable homemaker played to subtle perfection by film goddess Meryl Streep. Definitely a weepie, but a life-affirming one.
Best autumn scene: When mom and daughter, in Halloween costume, munch on candied apples—and really connect for the first time—on a Ferris wheel at the fall fair.

10. The Legend of Sleepy Hollow: Set in the bleakest part of the fall season, with fog and mist adding to the eerie atmosphere, Sleepy Hollow features the fab movie team of Tim Burton directing and Johnny Depp as the headless horseman hunter Ichabod Crane (Christopher Walken). Despite the chilly setting, spending two hours with Depp is sure to leave you feeling flushed and warm.
Best autumn scene: Get that Snuggie ready to pull over your eyes for the first chilling late-night appearance of the Headless Horseman in the ominous autumn woods outside Sleepy Hollow.