Throwback Thursday: In 1984, our technology was enormous.

A/V geeks have a certain fondness for retro tech — probably because they no longer have to schlep it around. 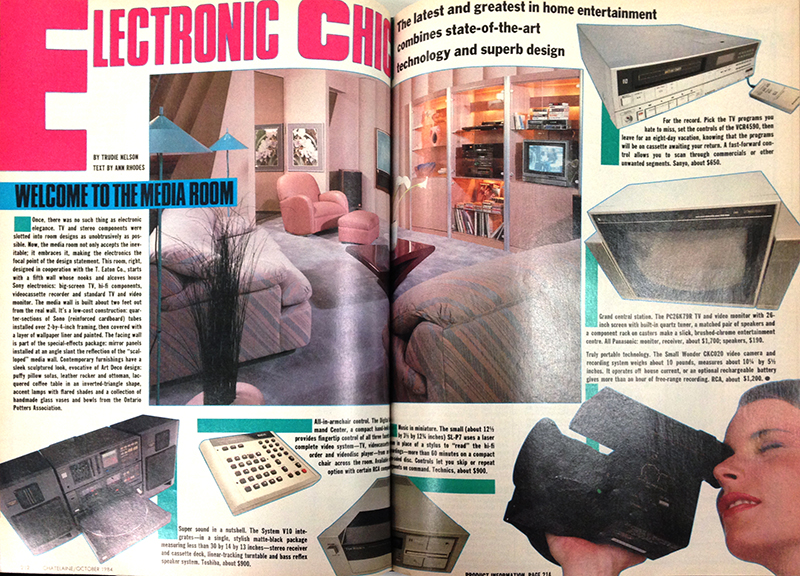 The times: Miami Vice premieres on NBC; the HIV virus is identified as the cause of AIDS; Volkswagen ceases production on its “Rabbit” compact model.

The technology: Big. (Like, really big.) Unlike Apple’s revolutionary 2001 iPod Classic (RIP) and its myriad descendants, what passed for pocket-sized tech in 1984 was anything but. Trudie Nelson’s Chatelaine spread, “Electronic Chic,” introduced readers to the “media room,” a space in the home specifically devoted to storing one’s audio-visual equipment. And frankly, you’d have needed an entire room to house these gargantuan specimens: Among the “latest and greatest in home entertainment” at the time were a $900 Toshiba sound system (complete with built-in turntable), a three-by-12-inch Discman prototype, and an RCA camcorder. Dubbed the “Small Wonder,” the camcorder weighed 10 pounds and cost $1,200. So next time someone complains about the size of the iPhone 6, send them a picture of this beauty.