Throwback Thursday: In 1981, we polled Canadian celebs for their most memorable gifts

What do you give the people who have everything? According to well-known Canucks—like Wayne Gretzky, John Candy, and Liona Boyd—the best presents are the meaningful ones. 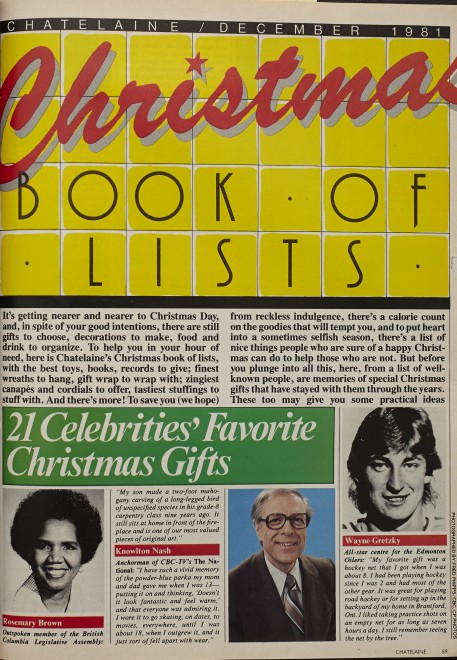 The times: American Elizabeth Jordan Carr becomes the first baby born as a result of in vitro fertilization; Spain is accepted into NATO; Richard Burton and Elizabeth Taylor separate for the second time.

The roundup: Canadian celebrities’ most memorable Christmas gifts. We at Chatelaine are no strangers to a holiday gift guide, but for our December 1981 issue, we decided to ask 21 big-name Canucks about past presents that held a special place in their hearts. Knowlton Nash, one-time host of CBC’s The National, vividly recalled a powder-blue parka he received from his mom and dad and wore on many a date; funnyman John Candy spoke fondly of his toy guns (of the ray and pump varieties); and Burton Cummings, lead singer of The Guess Who told us of the super-Canadian aluminum toboggan his grandmother gave him, saying it “really blew him away.” And, perhaps as a bit of foreshadowing, a blond-mulleted all-star centre for the Edmonton Oilers—one Wayne Gretzky—raved about a hockey net he was gifted with at age eight. He took shots on that empty net for seven hours a day. So no pressure at the mall this weekend, everyone, but as you can see, one well-chosen gift can have a quite a lasting impact.