Men's roles at home and in the workplace were in major flux in 1974, but rumours of their demise turned out to be greatly exaggerated. 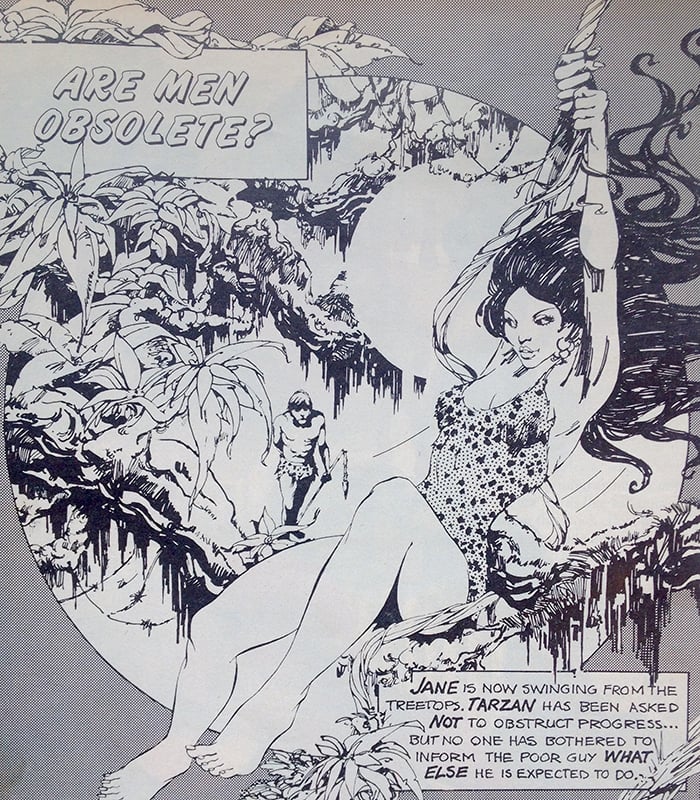 The times: The World Trade Centre opens in New York City; Barbara Walters is hired as co-anchor of The Today Show; the RCMP swears in its first female officers.

The conundrum: Are men obsolete? Well, the short answer is no: Four decades after June Callwood pondered this question for Chatelaine, men comprise about 75 percent of the seats in Canada’s House of Commons, and I just saw some on the sidewalk this morning. But that hasn’t stopped more journalists, like The New York Times’ Maureen Dowd, author of Are Men Necessary?, and End of Men author Hanna Rosin, from questioning their utility in the face of women’s rising prominence in higher education and jobs outside of the home. In Callwood’s 1974 column (excerpted below), she opined on how the emergence of a “new woman” — high on Women’s Lib and low on time to do the dishes — might complicate the heterosexual man’s sense of “virility” and his expectations as a provider. Of course, measuring a guy by his hunting/gathering abilities is painfully reductive, but the fact that we are still writing books on what it means to be a man 40 years later shows we haven’t quite come to any definitive conclusions. And that’s probably a good thing.

Are men obsolete?
Jane is now swinging from the treetops. Tarzan has been asked not to obstruct progress. But no one has bothered to inform the poor guy of what else he is expected to do.
By June Callwood

“…The new woman is everywhere, dancing a jig, snapping her fingers, making up new steps, looking full of judo. The New Man is nowhere. He doesn’t seem to have been invited to the celebration. It’s not a case of Father Doesn’t Know Best; no one can find father at all.

“…This is clearly a dicey time to be a male. The Tarzan-Jane syndrome, embedded in a society dominated by confident hunting males who kept females at the back of the cave, was full of creature comforts for the both of them. Jane and Tarzan knew exactly what was expected of them, even the personalities they were to assume. When that insane sanity vanished in a welter of liberation slogans, fair employment practices, procreation control and atypical female spunkiness, the visible gains went entirely to Jane. She’s now swinging in the treetops, mobile and frisky in the jungle for the first time in her life, and having a fine time.

“Many young men have it in their heads what equality is all about, but in a crunch, when the woman’s springiness suddenly invades some unperceived male territorial space, their sense of injury comes from deep-rooted, gut-sensed, old-fashioned masculinity…. The castration image recurs too frequently in the language men use about the women’s liberation movement to be dismissed as a jock phobia. What men, and some women, seem to be saying is that equality for women will diminish male virility.

“The shift has been a pure pleasure for women, to whom the visible benefits accrue. However, it is difficult for men not to imagine that if women are getting more, men must be getting less. This would be true if the world were a cherry pie, but not if human development is an infinity. If the outcome is that both men and women expand their capacities to love and enjoy, no one loses.”