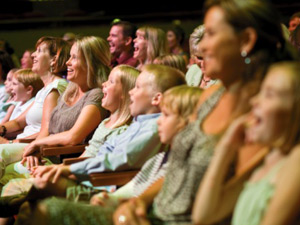 Atonement (2007), directed by Joe Wright, adapted from the novel by Ian McEwan
It’s very stylish and fast-paced, a study in inevitability – each character acts according to his own truth. Wright takes the themes of the novel and makes them bold and clear.

Sense and Sensibility (1995), directed by Ang Lee, adapted from the novel by Jane Austen
Emma Thompson stars and also wrote the screenplay, which is superb. She’s so aware of the loneliness of her characters, and how much love depends on luck.

Babe (1995), directed by Chris Noonan, adapted from the children’s book by Dick King-Smith
It’s charming, understated and one of the few kid’s films in which the climax occurs in total silence.

A Room With a View (1985), directed by James Ivory, adapted from the novel by E.M. Forster
Helena Bonham Carter plays Lucy Honeychurch with just the right combination of depth, intelligence and youthfulness.

Women in Love? (1970), directed by Ken Russell, adapted from the novel by D.H. Lawrence
This adaptation captures the intensity of the novel, both the physical passion and the passionate ideas. The performances never sacrifice intelligence for sensuality, and vice versa.