Patricia Arquette may have called out the States for its income-fairness problem, but for all of our progressive policies, equal pay for equal work still isn’t a reality in Canada either. 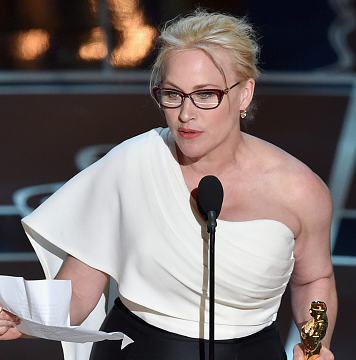 If you made it most of the way through Sunday’s drawn-out Oscar ceremony, your patience was rewarded with a uniquely humane moment courtesy of Patricia Arquette. Accepting her statuette for Best Actress in a Supporting Role, the Boyhood star took the opportunity to draw attention to America’s persistent wage-gap issue: “It’s our time to have wage equality rights once and for all, and equal rights for women in the United States of America.” It was triumphant and transcendent; heck, it even elicited a fist-pump from Meryl Streep.

Watching the broadcast from the perspective of cozy couch north of the border, you may have felt a wee spike of pride in calling yourself a socially conscious Canuck. But things aren’t much better up here: Canadian women still bring in significantly smaller salaries than men. In fact, just three of Canada’s highest-paid CEOs are women. (And don’t even get us started about feminist activist Therese Casgrain’s mysterious disappearance from our $50 bill.)

The fight for pay parity continues to rage on both sides of the 49th parallel, but while we’re waiting, here’s a quick primer on the state of male-female economic affairs in Canada.

The history: The equal-wages section of the Canadian Humans Rights Act was first introduced in 1977, almost 59 years after women got the vote.

The key stat: According the most recent census data available from Statistics Canada (2011), a female worker earns 74 cents for every dollar earned by a male worker. But that number is not without its problems: the figure is based on the earnings of full-time, full-year workers, and some researchers have suggested using hourly wages would more accurately reflect the real differences in pay between men and women.

The good news: It’s true that men pull in more money annually, but women’s wages actually increased at a faster rate than those of their male counterparts between 1981 and 2008.

The issues: Women often take time away from work for “family caregiving responsibilities,” according to Ontario’s Pay Equity Commission, which it says can result in a loss of wages, seniority and advancement opportunities in the workplace. They’re also over-represented in lower-paying jobs, such as childcare and clerical work, and are less likely to be part of a union. Only 10 to 15 per cent of the pay disparity is apparently due to pure gender discrimination.

The world stage: Canada sits in a surprising 19th place — just behind South Africa — on the World Economic Forum’s most recent Global Gender Gap report, which evaluates a country’s ability to achieve equality based on four categories: economic participation, education, health and political empowerment. (We only narrowly beat the States.)