Sure, there's plenty of cattiness and outrageous behaviour on the W Network's new series, but some of these women are just plain awesome.

Premiering Wednesday night on the W Network, Hockey Wives delves into the lives of 10 NHL families, focusing on the women behind the players. Some of these ladies have their own careers, while others are stay-at-home moms, but they do share a few things in common — gorgeous homes, big rocks on their ring fingers and tonnes of sass. A select few live in a coddled bubble of happiness, reaping the benefits of their husbands’ fame and fortune, while others struggle with the pressure of the hockey-wife lifestyle. In the first episode, viewers are introduced to eight of the 10 women featured in the series — many of whom are friends. (For now, at least.) Below are the best five most quotable moments from the premiere.

Wife 1: Noureen DeWulf, an actress on the Charlie Sheen show Anger Management; pregnant wife of Vancouver Canucks goalie Ryan Miller.
What happened: The pair is making plans for Noureen to spend the hockey season in Vancouver. She’s understandably worried about who she’ll know and whether she’ll be able to work.
Words: “The thing that scares me most about Vancouver is the rain. My hair is a big part of my beauty, so the fact that I might be moving to an environment that would jeopardize that is just frightening.”

Wife 2: Maripier Morin, a Revlon model, restaurateur and television host; girlfriend of Canadiens left-winger Brandon Prust, who shares her love of Guy LaFleur.
What happened: Morin is hosting the pre-game “blue carpet” event on the night of the Canadiens’ home opener. She admits on-camera that she desperately wants to impress Prust’s teammates when they walk the carpet.
Words: “You want to sound smart. You don’t want them to walk by and say, ‘Ugh, that was Prust’s girlfriend. Not so good eh?'”

Wife 3: Brijet Whitney, a mom of three and creator of a website for professional hockey families; wife of recently retired NHL left-winger Ray Whitney, her high-school sweetheart.
What happened: At Thanksgiving dinner, the Whitney family is torn between wanting Ray to play another season and having him home for holidays and birthdays.
Words: “He’s a free agent and approaching retirement. I’ve heard that the divorce rate is 75 per cent after players retire. We’re trying to remain out of the statistics.”

Wife 4: Nicole Brown, a stay-at-home mom of four and former hockey player; wife of Dustin Brown, captain of the L.A. Kings.
What happened: Brown may be the social glue that holds all of the Hockey Wives together, but at a dinner party in the first episode, she irks the other women by bragging about Dustin’s two Stanley Cup wins.
Words: “I think everybody would like to be in our position. Of course, not everybody is this lucky.”

Wife 5: DeWulf again
What happened: DeWulf has been asked to do a photo shoot for Playboy. She makes no bones about the fact that she’s posing (in part) to shock the other hockey wives. It works: one of them calls her a “slut” — albeit playfully.
Words: “I feel very sexy at four-months pregnant. All the right things that need to get bigger are getting bigger, and my stomach’s not all that big.” 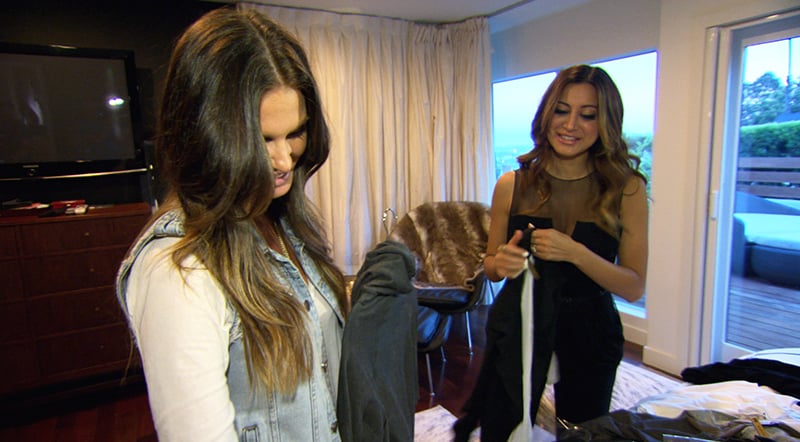