Summer events in Canada: Fun things to check out this July

Things to do, wear and see for the month of July. Plus a Canadian music playlist that will have your head bopping all summer long! 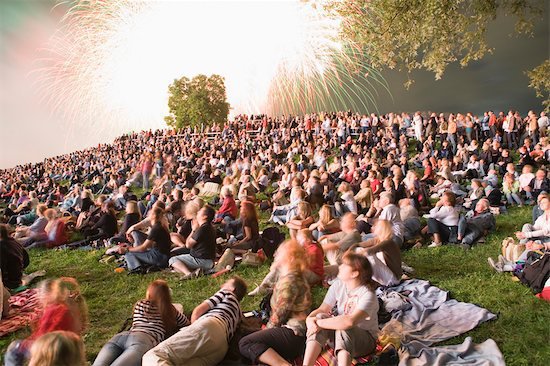 Make: Cowboy crafts
Embrace the Calgary Stampede (July 6 to 15), wherever you are, with a rodeo-inspired craft. Make your own DIY denim shirt by stitching a colourful patterned fabric swatch onto the yoke. See Bldg25.com for full instructions.

Hear: Canadian music
This month, the legendary Tragically Hip are making three appearances from B.C. to Ontario, and other hot Canadian acts including Kathleen Edwards, Arkells and the Rural Alberta Advantage are on the road, too.

Wear: Kitschy patches
Cheer on our Olympic athletes in style by fixing the Bay’s retro-cute patches ($5/set of 2)  onto a canvas tote or denim jacket. Go, Canada!

Do: Dance on the pier
Toronto’s Harbourfront becomes an open-air ballroom every Thursday in July. Strut your stuff in great scenery to live bands and DJs.

Laugh: Just for Laughs Comedy Festival, Montreal
Known as one of the biggest and best giggle-fests in the world, Bob Saget, Aziz Ansari and even Kermit the Frog will have you in stitches. July 10-29.

Pick: Bountiful berries
Across the country berry patches are bursting with nature’s candy. Strawberries, blueberries, raspberries, blackberries and Saskatoon berries are all ripe for the picking this month. Buyfromthefarm.ca.

Buy: Tory Burch-designed Feed Bag
Designer Tory Burch and Lauren Bush Lauren of the Feed Foundation and have teamed up to create three burlap tote bags, the proceeds of which will help raise $100,000 for 500,000 meals and $50,000 in microfinance and mentoring. $50, Holt Renfrew and Feed Projects.