Since his 2008 apology to residential school survivors, Harper's record on Native issues has been abysmal. His government's greatest offense: its refusal to launch an inquiry into 1,200 missing and murdered Indigenous women. 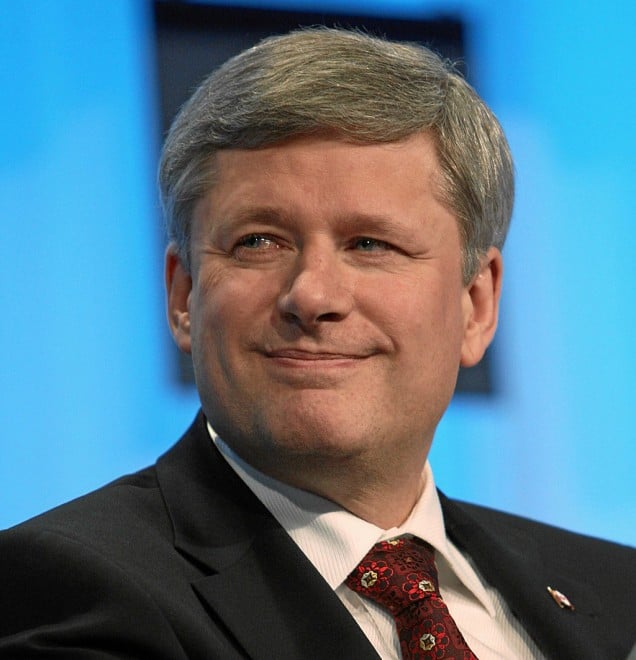 Seven years ago, Stephen Harper stood in the House of Commons to formally apologize to residential school survivors. For a politician who’s not especially humble, he demonstrated plenty of humility that day and offered a sincere and solemn statement of regret and grief, saying “We are sorry,” in five separate languages, for the stolen lives of some 150,000 children.

As a Canadian and as the mother of an Indigenous child, the day felt momentous and hopeful, like the beginning of a new beginning for all of us. The prime minister and I agree on very little, but like many others, I believed that the apology was a defining act of leadership that might help our country seriously reckon with one of its most shameful passages.

And then, nothing. Like a petulant teenager, rolling his eyes and whining, “Oh my god, I said I was sorry,” Harper done little to give weight those words with meaningful action, and gets defensive at any suggestion that he ought to.

Take Harper’s reaction last week, when the Truth and Reconciliation Commission marked the end of six emotional and painstaking years of work, after hearing from more than 7,000 survivors of residential schools. In addition to its findings, the TRC released 94 recommendations for action, which include reducing the number of Native children in state care, eliminating gaps in education and employment, protecting Indigenous languages and equal treatment within the legal system. Justice Murray Sinclair, the steady, thoughtful head of the TRC told the press, “We didn’t write this report for this government. We wrote it for all governments, including this government. We expect there will be other opportunities to talk with people when governments change, and governments always change.”

Sinclair seems like a diplomatic man. So I suspect that was his nice way of saying to Prime Minister Harper, who has been evasive on the recommendations: You’re on the wrong side of history on this one, dude.

Since the commission began, Harper’s government has hidden records of investigations into abuses at residential schools from the TRC. He has snubbed participants involved in the peaceful and inclusive Idle No More movement. He’s ignored calls to revamp the dismal, mismanaged Nutrition North Program, which is supposed to provide affordable food in remote communities. He’s cut funding to Aboriginal health research. His government barred Cindy Blackstock, a prominent and outspoken Indigenous child welfare advocate, from attending a meeting with Ontario chiefs on the issue.

But perhaps Harper’s biggest failing has been dismissing the repeated pleas for an inquiry into the causes and conditions that have led to 1,200 Indigenous women and girls being murdered or going missing over the last 30 years. Maclean’s recently put the risks facing Aboriginal women in context: while they make up two percent of the population, they account for one in four murder victims. They are far more likely to experience violence of all kinds, such as domestic assault and rape. Thirteen courageous women told their stories to reporter Nancy Macdonald. One is Ashley Richard, a 24-year-old business student and poet. What gives her story its power isn’t the violence she experienced, it’s her resilience — and the fortitude, strength and resourcefulness she shares with the other women profiled.

That same spirit abounded last week, as survivors, families and communities honoured the release of the TRC report with ceremonies, public gatherings, arts events, solidarity walks and dialogues on social media. A journalist friend, who covered the proceedings last week, told me that some survivors and elders she spoke to were initially surprised by the interest in the issue outside of Indigenous communities. And without diminishing the ongoing injustices, last week did mark a shift in how Canadians think about our history, and hopefully our future.

The findings of the TRC were reported on extensively in Aboriginal media, like APTN, and in mainstream outlets, like CBC, The Globe and Mail, National Post and the New York Times. Individuals, community organizations and school boards have taken it upon themselves to share the recommendations, and to plan a path forward. Supreme Court Chief Justice Beverley McLachlin has been unequivocal in speaking about our country’s history of “cultural genocide” and calling for change. Anglican churches nationwide rang bells to urge the government for an inquiry into missing and murdered women. Both the Liberals and the NDP have promised to implement the TRC’s recommendations if they are elected to power in the fall election.

The only holdouts for what Justice Murray Sinclair has called “a second chance to have an equal relationship” are the prime minister and his government. Harper was a no-show at the Ottawa hotel where the TRC formally released its report last week; he declined to speak at the emotional closing ceremonies at Rideau Hall. Not only is his silence a deep insult, he looks like a spoilsport not a leader. This is going to prove to be an enormous blunder and moral failure for Harper, who has massively underestimated the cultural and political resurgence of Indigenous Canadians. He’s been treating them like victims, all the while forgetting they are, in fact, survivors.

Read Ashley Richard’s story: I was 19 the night I was kidnapped and raped