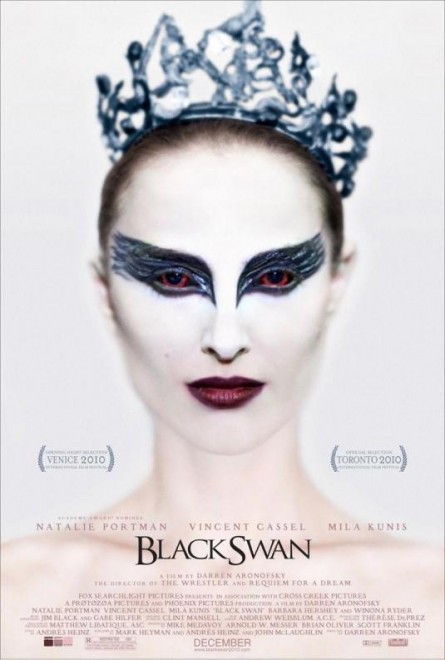 In theatres
Black Swan, the dark dance-world drama is in theatres this weekend. Star Natalie Portman is being mentioned as a possible Oscar contender for her portrayal of a troubled ballerina—boy, is she troubled. We’re mostly looking forward to Winona Ryder’s cameo. The rarely seen actress plays a washed-up former ballerina in the flick. See a clip here.

Hitting the shelves
’Tis the season for book-buying and ubiquitous Top 100 books lists. It’s also the time for big-name releases. Canada Reads’ 2010 winner Nicolas Dickner has a new novel out this month. Apocalypse for Beginners sets a burgeoning love affair between two teenagers against the backdrop of an apocalypse. The novel is in stores December 7th. But you can pre-order it here.

On TV
If Gene Simmons can do it, so can The Hoff. Baywatch star David Hasselhoff is the latest celeb to put his family life under the reality-TV microscope. The Hasselhoffs centres on the actor and his two daughters, Taylor-Ann, 20, and Hayley, 18 as the girls pursue careers in the entertainment industry (geez, doesn’t anybody want to be a doctor anymore?). The series premieres December 5th at 10 p.m. on A&E.

Watch & Listen
Who doesn’t love Feist? Love her even more in the new documentary Look At What The Light Did Now, which follows the singer as she creates and records her acclaimed 2007 album The Reminder. The DVD, officially out on December 7th, comes with a special CD that features music from Feist and friends. Order it here.

Download this
Start updating your holiday party playlist now. Former Tears for Fears singer Curtis Smith released “This is Christmas” this week. Coldplay’s new festive tune “Christmas Lights” was made available to fans December 1st at 8 p.m. And Vegas rockers, The Killers gave fans the nostalgia-heavy Christmas single, “Boots” the day before. All three songs are available at iTunes.