The designer and host of HGTV's Sarah's House enjoys breakfast by the fire, a fondue lunch with the kids, and skiing at Blue Mountain with her husband 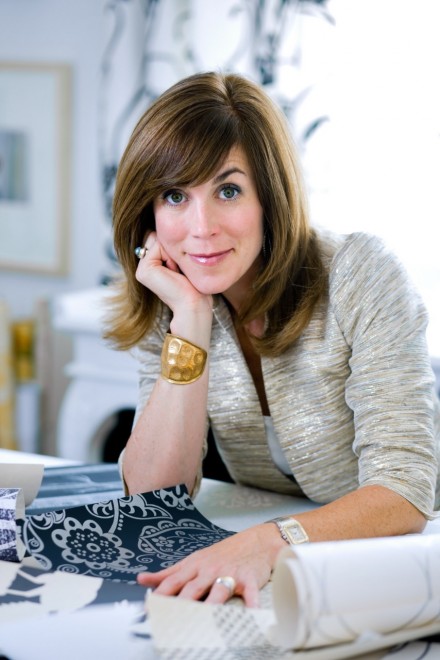 Designer Sarah Richardson has translated her signature style—bold, bright, uncluttered spaces—into an award-winning and highly successful TV empire. In ten years, she’s hosted, co-created and co-produced four design series for HGTV. Her series, Sarah’s House is HGTV’s number one show, and her latest endeavour, Sarah 101, breaks basic design ideas down into manageable projects for homeowners. Perhaps even more impressive: she spent nearly half of that time, pregnant or with two kids under five-years-old. How’s that for a design challenge?

Currently filming the latest installment of Sarah’s House (the show will broadcast this Fall on HGTV), Richardson took a break to share her perfect Saturday with Chatelaine.com.

My perfect Saturday is pretty much what my routine is now. It would be waking up at our farmhouse [near Collingwood, ON] and making waffles with my daughters. They really love to help me cook. They get into it. Hopefully, they won’t crack all of the eggs all over the floor.

Some people get random presents for Christmas that they really don’t want. Not me. This year, my Christmas list was full of very practical household things that I really wanted like a new Peugeot pepper grinder, and a Cuisinart waffle maker, which I got and I love it! So waking up and making really healthy waffles with the girls—with tons of yogurt and quinoa and wholewheat flour and frozen raspberries— would be nice.

Oh, and there would be a fire. My husband is really great at making a big fire on Saturday morning, so a fire would be roaring to keep us all cozy while we’re having breakfast.

If it’s snowy out, I’d love to take the girls out to do some tobogganing. We have a little bit of a hill behind our house. It’s nice to just get outside and play in the snow—maybe build a snowman.

I’d like to take a walk in the woods. Maybe snowshoe through the woods, if there’s time. I’d like to do that with my husband, just the two of us. That would be really nice.

For lunch—cheese fondue, which is our favourite relaxing weekend lunch. We have cheese fondue a fair bit! We’d have it with a good salad so we don’t feel like a complete wreck and with a really nice glass of chardonnay. I love a good chardonnay.

Don’t ever make fondue yourself—it’s too expensive and it gets stringy and it all separates and it’s just a mess. Buy a package instead, it’s about $12 or $14. They sell the best cheese fondue package at the grocery store. It’s made in Switzerland. It comes in a red-and-blue box and it’s called Fromalp—it’s from the Alps to your door! We literally cut the package open, put it in my fabulous cast iron enameled fondue pot from Le Creuset—it’s really great, you just put it right on the stovetop. Have it with an Ace Bakery baguette and you’re off to the races.

After lunch, I’d love to have the opportunity to read in front of the fire. Read the latest issue of Vanity Fair, or the newspaper, which I don’t often get a chance to do.

Following that, while my two-year-old naps—hopefully she’s still napping because she’s thinking about giving up her nap—I’d love to go skiing for the afternoon. My four-year-old is really loving skiing—she did it for the first time just before she turned two—and my husband and her often go together. She’s really into it and she keeps up with my husband now. The two of them rip it up together. I’d get my mom to come and take care of [the two-year-old] while we go and do some runs.

No, forget that! Change that! After the fondue, after an afternoon nap, I’d go night skiing at Blue Mountain with my husband for a Saturday night date. They’ve got great night skiing at Blue Mountain. I did it for the first time this year—having two little kids I haven’t had the chance to ski that much. I did it right at the beginning of the holidays. My mom lives near our country house and she came over to watch the kids. My husband and I both got up there and skied for two-and-a-half hours—we got in twenty runs or something! It’s incredible and we were having such a great time. It’s so invigorating and so beautiful. It was probably my favourite date I’ve had with my husband in a long time.

After that, we’d grab a late dinner at a small bistro. It would be somewhere in Collingwood. My rule of going to a restaurant is that I’ll order anything I wouldn’t make at home, so I don’t think I’ve ever ordered chicken at a restaurant in my life! I love eating fish in restaurants. I love the more adventurous way it’s cooked and the more interesting preparation—the sauces and cooking methods that I wouldn’t do at home—so I’m always a fan of some sort of fish for dinner. But truth be told, my husband has finally admitted after 11 years together he would prefer not to eat fish so I’m definitely not cooking it at home! He’s my red-meat man and I’m the fish girl. It works out for both of us.

We don’t watch TV or anything. We don’t actually have a working TV up there. But we are lucky that we have a fireplace in our bedroom. I would say the night ends with a roaring fire in the fireplace in our room and a good book and a cozy night with the two of us. Then we get up and do it all over again—well, maybe not the cheese fondue. I only do that once a week!