The Orlando shooting has put an American policy that bans sexually active gay men from donating blood back in the news cycle. But Canada's rules are even worse. 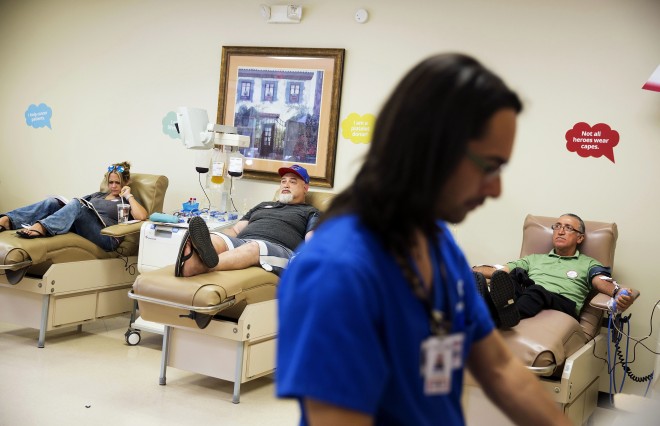 On Sunday June 12, hospitals in Orlando were in desperate need of blood. There were 53 injured survivors of the mass shooting at Pulse, a gay nightclub. Many had multiple wounds, and many had been losing blood for hours. When the call went out for donations, hundreds lined up in the sun and heat, including Muslims fasting for Ramadan. In the end, more than 5,300 people from all different backgrounds donated blood in Florida that Sunday, a single-day record for the state.

One group, though, was excluded from this act of generousity and solidarity: gay men, or, more broadly, men who have sex with men. The U.S. Food and Drug Administration prohibits them from giving blood if they have been sexually active in the past 12 months. In other words, it was easier for the killer to buy the AR-15 that killed and injured over 100 people, than it was for the very people who were targeted to help save the lives of members of their community.

Here in Canada, the restrictions are even tougher. Men who have sex with men must be abstinent for five years before they can donate blood — even if they have been screened and found to be free of transmittable diseases. And that waiting period is actually an improvement on Canadian Blood Services’ previous policy. Before 2013, there was a blanket prohibition on donations from gay men. There’s long been frustration and outrage over this, but now, post-Orlando, the Liberal government has finally decided to act on its election promise to lift the ban. Well, sort of. As of August 15, gay men will have to be abstinent for only one year before they can give blood.

It’s a better policy, but it’s still not good policy. Canadian Blood Services’ definition of sex can be as overly vague as Bill Clinton’s was excessively precise. It does cite oral and anal sex between men as being the primary concern. But often, in communicating its policy, CBS just uses the expression “sexual contact between men.” It also doesn’t distinguish between protected and unprotected sex, whether the person is on the giving or receiving end of those acts, or whether he is in a monogamous relationship. All together, this gives the misleading impression that any sexual contact at all between men is of high risk.

By contrast, the eligibility requirements for other groups are largely tied to particular behaviours and conditions — like those who have been exposed to hepatitis, for instance, or who have travelled to regions where Zika is prevalent — not to their identity. And consider this: if a woman has had sexual contact with a man who has had sex with a man in the last five years, she only has to abstain for one year before she can donate, not five. (This also assumes straight women always know the full sexual history of their male partners, and that their male partners who have had sex with men are always upfront and honest about having done so.)

There are plenty of gay men whose sexual behaviour is much safer than that of straight people — and I’d argue that gay men are more likely to be regularly tested for sexually transmitted diseases and to talk with their partners about safer sex. It’s also important to note that the blood donation system already has built-in safeguards, given that donors aren’t required to provide medical records. Blood is thoroughly screened and tested, expressly because people sometimes lie, or simply aren’t aware of their risk factors.

History is important here. AIDS was first reported in Canada in 1982, but the Canadian Red Cross, which ran the blood donation program at the time, waited until 1985 to start screening for it. As a result, some 2,000 people were infected with HIV and about 30,000 with hepatitis C from tainted blood products. The Krever Inquiry found that the blood donation program was a shameful mess, rife with screw-ups and bureaucratic dysfunction. Billions were paid out to victims and the system was completely overhauled.

So, it makes sense that Canadian Blood Services would do everything it can to protect the blood supply. But the one-year abstinence policy directed at gay men has very little to do with safety and much more to do with institutional butt-covering. The irony is that gay men are among those who best understand the risk of HIV/AIDS and who have lost the most from it. Making them pay the price for the system’s past mistakes isn’t about common sense or caution. It’s cowardice.

More:
Orlando shooting: Intolerance and anti-gay rhetoric play a role
Men who intervened in Stanford sex assault show we can all be heroes
Can the Conservatives appeal to women? Well, they’re trying