For 20 years Doris Anderson changed the world through the pages of Chatelaine. 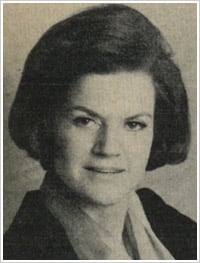 Journalist, author, political activist and legendary Chatelaine editor Doris Anderson died on March 2, 2007 at St. Michael’s Hospital in Toronto from a combination of pulmonary fibrosis and heart and lung problems. She was 85 years old.

Born Hilda Doris Buck in Medicine Hat, Alta., on Nov. 10, 1921, Anderson survived the Depression and went on to become a teacher. After saving enough money to put herself through the University of Alberta, she graduated in 1945 and moved to Toronto, determined to be a journalist.

Anderson joined Chatelaine in 1951 as an editorial assistant. Six short years later, she was made editor, reportedly a position she was given only after she threatened to quit if they hired another man for the top job. She remained at Chatelaine‘s helm for the next 20 years and completely altered the course of the magazine. She began a no-holds-barred conversation with Canadian women by exploring critical topics such as abortion, birth control, poverty, race, feminism, sexuality and child abuse. During the time she served as editor, the magazine’s circulation quadrupled.

In 1957, at the age of 35, Anderson married P.E.I. – born lawyer and Liberal Party backroom organizer David Anderson. They had three sons, Peter, Stephen and Mitchell. The couple divorced in 1972 and David died of cancer in 1986.

Always interested in women’s rights, Anderson fought for the creation of a Royal Commission on the Status of Women throughout the 1960s. The report from that commission led to the start of Canada’s feminist revolution. When women’s equality rights were finally added to the Charter of Rights and Freedoms in April 1981, Anderson was directly responsible.

In 1979, she accepted a federal appointment as chair of the Canadian Advisory Council on the Status of Women. Anderson then became head of the National Action Committee, a coalition of more than 700 women’s organizations, serving as president from 1982 to 1984. She also sat on the Ontario Press Council (1977 to 1984) and began writing a biweekly column for the Toronto Star, which she wrote for ten years. The University of Prince Edward Island appointed her chancellor (1992 to 1996), after which she presided as the chair of the Ontario Press Council (from 1998 to 2006). She also wrote three books and an autobiography, Rebel Daughter, published in 2002.

Doris Anderson’s passion, drive, commitment and heart changed the way Canadian women thought about themselves and their place in the world.