Why pessimism (read: realism) is not always a bad thing

Raised by a pessimistic French mother in a positive North American world, Olivia Stren felt like an emotional outsider. Turns out her mother’s realism was a gift after all. 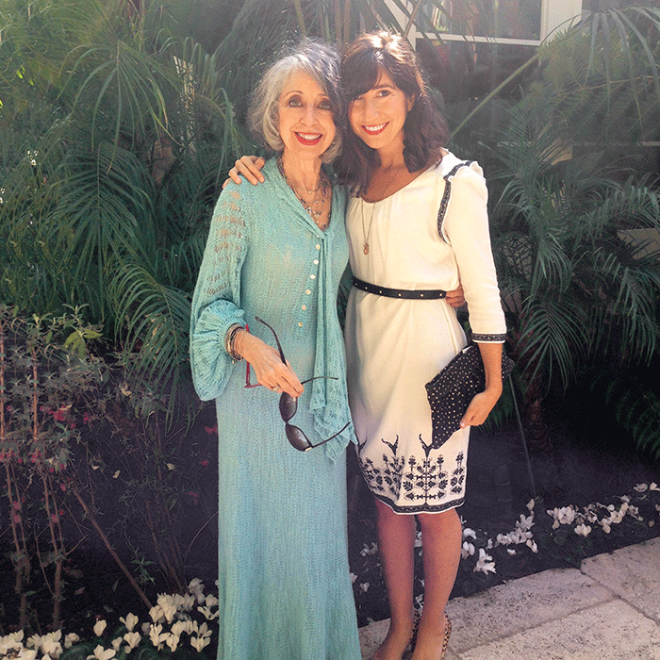 Olivia Stren with her mother, Claude, at the Hotel Bel Air in Los Angeles this spring.

The philosophy in my family has generally been not so much that the glass is half empty as that it’s basically a sieve. My mother is French, so pessimism is arguably her birthright. The French have, historically, exhibited an impressively unrelenting fidelity to pessimism and its assemblage of black-turtleneck-wearing in-laws: Moroseness, Ennui, Despair, Misery, Melancholy, Malaise, Chagrin (the list is longer than your average suicide note). A recent piece in the Economist entitled “Bleak Chic,” about the particular Gallic delight in the doleful, revealed that the French are more depressed than the Ugandans and the Uzbeks. “If the French are life’s critics, they are at the same time idealists,” it writes. And perfectionism and romanticism do not make for a harmonious ménage. If in English every cloud has a silver lining, in French, “il n’est point de bonheur sans nuage” (there is no happiness without its cloud).

When other mothers sang lullabies about twinkling stars and market-going piggies, mine sang the cheerful chanson lines “Plaisir d’amour ne dure qu’un moment / Chagrin d’amour dure toute la vie” (The pleasure of love lasts but a moment / The pain of love lasts a lifetime). Life — framed around loss — seemed forever to teeter on the precipice of something worse.

I told my mom a few years ago that I had just spent an afternoon having a root canal. She consoled me: “Well, at least you didn’t have a root canal like I did, in Tanzania with no anesthetic and a temperamental electrical socket.” Fair enough. And when, in my late 20s, I decided to quit my job as a full-time editor at a magazine to try my luck at freelance writing, I explained my professional decision this way. Me: “I just feel like it’s time to leave the nest.” Mom: “Yes, I understand, but sometimes birds leave the nest too early and snap their necks.”

Growing up, I often fantasized about being part of a “half-full” family. How different (more successful! more athletic! better rested!) I would be. The kind of family that eats barbecued meat and goes skiing and drinks diet sodas and doesn’t talk about how the aforementioned may cause death. In an episode of 30 Rock, Tina Fey’s Liz Lemon introduces Alec Baldwin’s Jack Donaghy to her parents, who are unrelentingly encouraging. When Jack eats a baked good, the Lemons celebrate his achievement in caloric consumption: “Good job finishing that muffin!” I dreamt about belonging to that kind of exotic, gold-star-for-muffin-eating family.

But, as it turns out, maybe I should feel more positive about growing up negative. Last year, scientists from the University of Erlangen-Nuremberg in Germany discovered that pessimists tend to outlive optimists. If optimism can get confused with denial and delusion, pessimism (read: realism) about the future may encourage people to make careful, prudent, longevity-inducing choices. Meanwhile, a 2009 study piloted by Canadian psychologist Joanne Wood and published in the journal Psychological Science established that positive self-statements (like “I accept myself completely” or “I am lovable”) can actually enervate your self-respect. The logic: If you don’t feel lovable in the first place, instructing yourself to feel otherwise can make you feel worse, highlighting the gulf between how you feel and how you’re telling yourself to feel.

Recent books, like Oliver Burkeman’s The Antidote: Happiness for People Who Can’t Stand Positive Thinking, have also come out in praise of pessimism. “For a civilization so fixated on achieving happiness, we seem remarkably incompetent at the task,” writes Burkeman. The British author argues that it’s precisely our tireless pursuit of happiness that is making us so miserable. In a culture that exalts happiness as life’s ultimate goal, and in which any unhappiness is code for failure, it is the pressure to feel happy — at all times — that is making us so unhappy.

Compounding the problem: our compulsion to take our own temperature (“Am I happy?”), to perpetually monitor our own moods, serves as the surest self-sabotaging path to gloom. “Ask yourself whether you are happy,” said philosopher John Stuart Mill, “and you cease to be so.”

Before I got married, everybody I encountered who had learned of my engagement asked me peppily: “Are you happy? You must be so happy!” The question always left me worrying that I wasn’t adequately ecstatic. It seemed to me the most stressful part about getting married was the social pressure to feel overjoyed at all times.

Despite all fashionable commandments to live in the moment, happiness might actually be best savoured in retrospect when dimly tinctured with nostalgia and not when aggressively chased. “[Happiness] is a cat-like emotion,” wrote Robertson Davies in a letter to his granddaughter. “If you try to coax it, [it] will avoid you. But if you pay no attention to it at all, it will rub against your legs and spring unbidden into your lap.”

If this so-called cult of optimism is making us all reach for the SSRIs, Burkeman proposes another path to happiness. Instead of tamping down our negative emotions with WASPish good cheer, he advocates that we embrace our insecurity, sadness and uncertainty. There’s a comforting warm-milk familiarity to this, maybe because it reminds me of my childhood. Either way, this new freedom to feel bad makes me feel — almost — happy.