My BFF and I were "sexless life partners"

Two young women are everything to each other — best friends, surrogate family and confidants — until all of a sudden, high in the mountains of a strange new town, things fall apart. 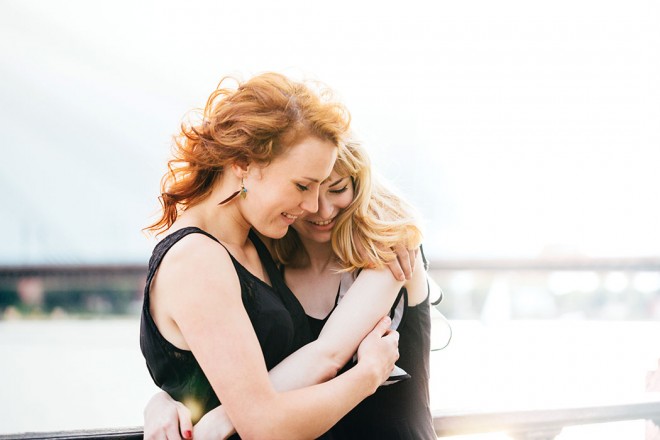 The rumour, we later learn, is that we’re a couple. We move into our five-month house-sit in the highest town in the mountains of West Virginia, my best friend and I — knowing no one, knowing nothing except that we’ve been offered an adventure and a place to live together — and we confuse the neighbours.

“Of course we assumed you were a couple,” say the friends we eventually make. “You live together, you go everywhere together, you hold hands walking down the street. You call each other Baby.”

We do. But we’re 25 and both recently sprung from the conservative religions we embraced most of our lives, and the idea of being mistaken for lesbians is amusing and exotic and a bit pleasing — a testament, we feel, to the connection between us that surpasses run-of-the-mill best-friendship. We’re soulmates. Partners in a chaste marriage. Opposites who fit so completely that we bring out each other’s deepest and most essential selves.

We met at 19 in Bible school. Anna hailed from a New England sect called the Kingdom, I from a Canadian hybrid evangelical patriarchy; both championed modesty, self-denial and female submission. Together, we explored our doubts and dreams. We read books called The Dance of the Dissident Daughter and Succulent Wild Woman. We shared illicit glasses of wine in a damp seaside hostel in Italy, tipsy for the first time at 23. We bared our shoulders in tank tops. We started wearing pants. We were each other’s dates to the weddings of Bible school friends marrying young into dutiful-helpmate-and-motherhood, and we refused to assemble among the throngs vying for the bridal bouquets. We raised our arms, lifted our voices and danced together out of Thou Shalt Not into a world of creativity and freedom.

Our motto by the time we move to West Virginia is We don’t do boys, and by that we mean don’t involve ourselves in general. Years of practised restraint — our religion denounced dating in favour of a save-yourself-for-marriage approach — merge with fledgling feminism. Who needs a man? Not us!

We’re both virgins. I’m curious about the men I’ve been sheltered from, but I’m uninterested in anything that might threaten my independence. My dad was physically present but emotionally checked out for much of my childhood — debilitated by an unnamed depression, self-medicating in ways that didn’t leave much space for his family. For decades, I watched my mother, partnered but lonely. I never put much stock in the necessity or advisability of men.

I do not need a man. I do not have needs. I have Anna.

Anna’s dad was physically present but emotionally checked out for much of her childhood too, but she galloped forward in search of the attention her dad never gave her. She had her first forbidden kiss at 15 and snuck out for trysts with secret boyfriends — stopping first to retrieve a pair of jeans stashed in the woods — while I protected my heart, kept my calves covered with voluminous skirts and never dated until a few tentative coffees in my early 20s.

For us, natives of different countries, house-sitting is a rare opportunity to live together. We agree we can dabble with boys, but our true commitment is to each other. The first time we climb to the top of one of those West Virginia mountains, we tug off our rings and exchange them. We place the rings on our “I’m taken” fingers, and we keep them there.

And then a man walks into a mountain-music coffee house: long legs in Wranglers, feet in cowboy boots, a frizz of red hair beneath his cowboy hat. Eddie, a country singer bound for Nashville. By the end of the night, he and Anna are gazing into each other’s eyes, crooning a duet, then heading back to his camper van hand in hand.

Over the following weeks, Eddie becomes a fixture in our house. He cooks up bacon and eggs in our kitchen, strums his guitar at our dining room table, grins at me in the morning from Anna’s bed. Anna starts wearing cowboy boots. She goes to the honky-tonks where he has gigs, to diners for meals with him instead of me, to drive-in movies in his camper van. In that van, she confesses to me, they share the one thing unavailable in our everything-but-sex marriage. I’m enraged. Forsaken. We don’t do boys!

I make my disapproval clear with silences and glares. I take off on retaliatory outings that don’t include her. “He sings flat,” I retort when she gets swoony, and it’s true. He does.

I feel like a long-suffering spouse enduring a flagrant affair. One night, when she’s out with him, and I’m home alone, I stand in her empty room and tug her ring from my finger. I deposit it on the dresser for her to find.

The first guy who offers will do. Duane is an actor and musician in a funk-blues band that we loved to dance to before Anna defected to country music. He adores me, it turns out. And when he reaches for me across the couch, it feels interesting, and it feels like what the hell, and it feels like something to do on all those nights when Anna’s out with Eddie.

Sometimes I speak to Duane in French. “What are you thinking, my Canadian Mist?” he asks, and I reply with my rusty grade school language skills: “I feel lost. I miss Anna. How can you say I’m everything you want in a woman when I haven’t shown you my real self?” It’s the only time I open up to him. Duane does not understand French.

One night Anna, Eddie and I see the production of Much Ado about Nothing that Duane is in. In the dressing room later, Anna talks art with the man playing Benedick, dark and British, brilliant blue eyes, of indeterminate age. His quiet depth is striking next to the boisterousness of the other actors. I’m drawn to him and embarrassed to be near him, certain he can see through to the part of me I’ve silenced with Duane, to the purposelessness and loss I’ve buried under my new role as a pliable girlfriend.

When our house-sitting gig is over, Anna and I have no choice but to part: Neither of our governments grants residency to same-sex non-sexual soulmates. The rift remains between us, but it’s easier now that we’re long-distance and I can pretend Eddie doesn’t exist. She’s living with him in Tennessee, in his van and on a series of friends’ couches. I’m back in Toronto, working full-time, attending school part-time and living alone in a mouldy basement room. Duane stops calling.

My father is trying to make amends. He writes me weekly letters in his left-handed scrawl, letters that I have no idea how to respond to. He says, “I’m sorry. I was sick and in pain. I want to know you now.” I don’t know how to let my father know me. I don’t write back, not once, and then he stops.

The person I am writing to is the dark British actor. This feels safe. He can’t see me, can’t touch me, but he can hear the words that I, alone on my mattress on the basement floor, deliberate over. He writes back: “I hear your voice so clearly— and it moves me.” I live for the joy of his words from afar.

Anna visits for two weeks during a 40-below January. We don’t speak of Eddie, the resentment and betrayal festering until one night she drags them to the surface: “Do you know how unsupported I’ve felt all these months? Do you know how selfish you’ve been? You’ve punished me for falling in love.

“Why,” she asks, “does it have to be Heidi or Eddie? Why can’t it be Heidi and Eddie?” We go to bed not speaking.

The next day I finally understand the answer: because I have so thoroughly cut myself off from men that my best friend — my safe companion — functions as a replacement for romance in my life. But Anna hasn’t cut herself off, and her relationship with Eddie robs me of the protection afforded by our friendship.

She holds me as I cry. The independence I thought came from strength is instead rooted in fear and hurt. I’m devastated. I’m terrified. But I have to unbolt a locked-tight part of me and let our relationship evolve into something different.

Anna breaks up with Eddie, eventually. She marries someone else. I serve as the officiant at their wedding, speaking the words that join them. The dark British actor is with me. Two months later, five years after we met, he and I get married too. My father sings at our wedding, his guitar on his knee, wearing Crocs with his suit because he forgot to pack his good shoes. He has become a supportive participant in my life, so gradually and naturally that I almost haven’t noticed the change.

But it’s Anna who walks me down the aisle, places my hand in my husband’s and gives me away.

We still call each other Baby.

Last summer, we announced our Write for Chatelaine Contest and were overwhelmed by the response. Out of the more than 700 true-life stories that poured in, “Breaking Stride” is our winner.