One man shares the thrill and satisfaction of climbing a mountain

Mountain lions, avalanches and broken bones? Not usually. Adventurer Zbig Barwicz explains what it feels like to make the trek — and what he learned from the experience. 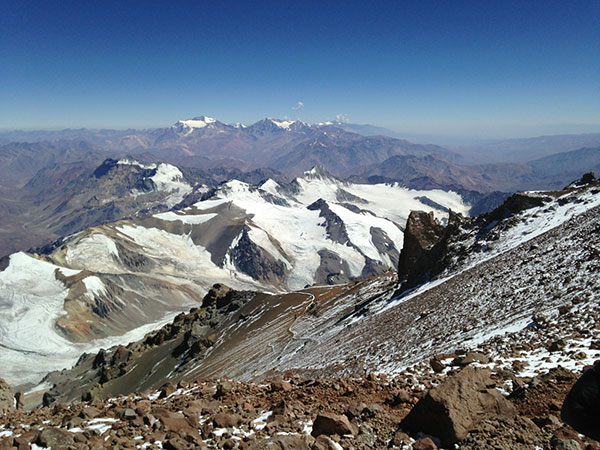 Last month, Zbig Barwicz climbed Argentina’s Aconcagua mountain to help raise funds for the David Suzuki Foundation. His amazing adventures (and incredible pictures!) are chronicled in his blog, Climb for DSF. Here, Barwicz explains what it’s really like to climb one of the world’s highest mountains.

I climbed Aconcagua — the highest mountain outside of the Himalayas and one of the Seven Summits. It’s close to 23,000 feet and I achieved it in a guided expedition over 20 days. I went with the Alpine Ascent International group and our guide had climbed Mount Everest twice. We also had a sherpa from Nepal. There were 10 climbers from Canada, the United States and Australia. It can be challenging to share a tent with two or three people you don’t know — none of whom can take a shower for three weeks. You have to work together to build the camp and get things done. It can be pretty intense, but we didn’t have any major drama.

Every day is different. It took three days just to walk to the mountain and get to base camp. You’re drinking four or five litres of water a day and eating at least 3,000 calories. You have to be very disciplined about eating and drinking every hour . Packing up or unpacking camp takes longer and longer the higher you get because the altitude makes you do everything slower. You go from base camp to the summit in four ascending camps, and by the time you get to the top you’re running on 47 percent of the oxygen you get at sea level. Just to climb a mountain, you have to learn how to breathe all over again.

I really like the physical challenge and discipline of climbing, as well as the discovery and adventure of visiting the world. You also never know what’s going to happen. On this climb, no one died or had a serious injury, but two people out of 10 were evacuated back to base camp. In both cases, it was a mix of exhaustion and lack of acclimatization. You can’t anticipate how you’re going to react. Some people have to turn around after one or two days. I trained for a year in advance to make sure I was ready. My wife climbed Mount Kilimanjaro with me, but declined to do this one because, in her words, love is not enough to make her carry another 60-pound backpack.

When you finally reach the summit, it’s really exciting but very difficult. But when you see it and you know you’ve achieved it, the adrenalin really kicks in. You take all of your pictures, you call the people you love on a satellite phone, and then you realize that you have to go back down. It’s not a vacation — it’s probably closer to masochism, but it’s extremely fulfilling. When you look at the mountain, it seems impossible to make it all the way to the top, but when you divide it into steps, it becomes possible. Climbing has taught me patience because you have control over very few things and you have no choice but to go slow. It’s made me realize that sometimes it takes time to achieve your goals.