Rachelle LeFevre: Interview with the Off the Map star

Canada's frank new sweetheart talks about life after Twilight, her new show and how she stays happy 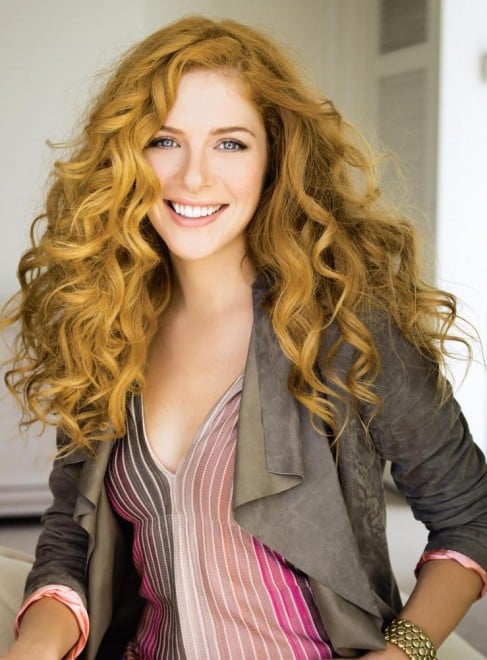 Talking to Rachelle LeFevre is like drinking cherry soda — all fizzy, tasty fun. When the Montreal-born actress phones from Hawaii, where she’s shooting Off the Map, the new ABC TV series created by Shonda Rhimes (Grey’s Anatomy), you can practically hear the bubbles popping through the line. “I’m sitting outside on the grass. It’s so amazingly beautiful, and I just took my first yoga class in two years,” she burbles, as birds chirp in the background. “I was so full of bliss I thought I was going to burst into tears in class. ‘I’m having a moment of grounded stillness!’ That’s rare for me, because I’m always like, Boing! Boing!”

You don’t have to know her long to agree with her. Rachelle, a 32-year-old stunner with tumbling red hair and a pyrotechnic smile, is a woman whose lights are always on. She says “totally!” instead of “yes” and “awesome!” when she means, “I agree.” But it’s not hyperbole; she really does seem to Feel! and Enjoy! more than the average human does. And with two feature films out at the end of 2010, she’s on a roll that would make anyone giddy.

In Barney’s Version — a film based on the prizewinning Mordecai Richler novel and co-starring Paul Giamatti and Dustin Hoffman — Rachelle plays Clara, Barney’s first wife (of three), a flamboyant, self-destructive poet. And in Casino Jack, a movie based on the true story of Jack Abramoff (played by Kevin Spacey), whose influence-peddling scandal rocked Washington, D.C., she’s Emily Miller, a jilted fiancée who allegedly set the FBI on Abramoff to punish her ex, Abramoff’s partner. It’s no coincidence that in both films, and in her most famous role — the sexy, scary vampire Victoria in the first two Twilight movies — Rachelle is the troublemaker. “I do seek out the pot-stirrers,” she says. “I love how messy human beings are. We’re trying to fit into the boxes in society, yet we have those moments where we want to come unhinged. I’m always looking for the roles where it gets messy.”

No wonder she was “heartbroken” about being dropped from the Twilight series. “Playing Victoria changed the landscape of my career,” Rachelle admits. But when a scheduling conflict arose between Twilight’s third instalment and Barney’s Version, the franchise’s producers replaced Rachelle with Bryce Dallas Howard. Bravely, Rachelle released a statement that said she wasn’t leaving by choice. “That franchise has the most unbelievable fan base — we’re talking about 13-year-olds who saved up their allowances to see it eight times — and the idea that they would think I’d opted out made me angry,” she says. “I wanted to say, ‘I know what I had here; I didn’t throw it away,’ then move on. Now, there are many other things in my life that I love.”

That includes Off the Map, the adventure-medical series she’s shooting in Hawaii, which premiered last month. Rachelle plays Ryan Clark, a well-travelled doctor in an understaffed clinic in the South American jungle. “Ryan is the MacGyver doctor,” she says, laughing. “She’s always hacking with the machete, remembering different types of healing that she learned in other countries.” The show is rife with stingray attacks and ziplining accidents, and the comely doctors spend as much time jet skiing as operating — which Rachelle, who loves to be active, is eating up. In addition to yoga, she hikes, plays soccer and is a devotee of L.A.’s Sweat Garage, a boot-camp style gym owned by a friend. “It’s my mecca,” she says. “It’s a treadmill-and-weights workout for when you really want to get the lead out. But the philosophy is not ‘Push until you vomit!’ It merges being peaceful with intensity.”

Rachelle didn’t always have that balance. When she first saw herself on TV at age 18, “I freaked out,” she says. “I thought, ‘I have to be really thin, because that’s what Hollywood wants.’ It was a destructive force in my life in my mid-20s. It interfered with the enjoyment of everything. Now, I don’t follow diets — I simply think about what I’m eating. If I eat badly one day, I eat well the next.”

She does a variety of workouts, including Pilates and strength training, three to five times a week. “But I struggle with the things that most women do — trying to feel good in my body, trying not to criticize myself every time I put my jeans on,” Rachelle says. “The thing I won’t do is starve myself to be as thin as some of the actresses my age. I find it upsetting when I see them in person. They’re hungry all the time. I don’t think this business offers anything that’s worth trading your health and happiness for.”

To keep sane, Rachelle relies on her “tribe,” a group of disparate girlfriends. One works for the Weekend to End Breast Cancer, another is a publicist in Washington, D.C., a third is a PhD candidate in New York, and so on. “And one in Montreal just had her second baby,” Rachelle says. “When I have a baby, and I’m going, ‘What do I do?’ she’s the person I’ll call. With them, there’s not a single thing you can admit about yourself that you will regret or be judged on.” So, Rachelle is keen to have a baby? “I want to have a couple, sooner rather than later,” she says. “I thought I’d met the guy, but sadly, it turned out not to be him. But it was beautiful, and I’m glad that I knew him. My friends and I talk so much about romance: ‘Am I ever going to meet someone?’ I look at it like, I met somebody once, I can do it again.”

Rachelle also believes, “We always have a choice, especially in how we treat others.” She gets “incensed” if she sees someone being rude or excusing their behaviour by saying they had a bad childhood. “Mine wasn’t exactly amazing,” she says. “But my philosophy is ‘Take responsibility for yourself.’ How you act when life is difficult is really telling about who you are.”

About that childhood: Rachelle’s father, an English teacher (he nicknamed her Binky Smilington Beans because she was always jumping around and laughing), and her mother, a psychologist, divorced when Rachelle was eight, and the family moved a lot, never living anywhere for more than three years. Rachelle was perpetually the new kid, and she wasn’t skilled at fitting in. “I hadn’t learned what to do with my hair yet, so I had this bushy Jewfro, plus freckles and braces — and I had to wear my headgear to school,” she says. “I was Headgear Kid. With each new school I became increasingly desperate to fit in, and people can smell desperation.”

But when she began acting as a teenager, she found her home — paradoxically, in a job that requires her to live out of a suitcase. (“I don’t need to resurrect Freud to take a look at that one,” she says dryly.) Now, she calls wherever she’s sleeping “home,” whether it’s a hotel room for one night or her place in Los Angeles, where she’s lived for six years, working steadily in films (Confessions of a Dangerous Mind, Fugitive Pieces) and TV series (What About Brian, Boston Legal). “I’m totally at peace with that — in fact, I love it, because it means that home is now wherever I am,” she says.

She still feels connected to Quebec and Canada, though. “The more I go to other places, the more I have an appreciation for what an extraordinary upbringing I had, how multicultural it was,” Rachelle says. “And the fact that I speak French is, in America, really cool and exotic.”

As the hour-long conversation winds down, Rachelle again utters the two words she’s mentioned numerous times: peace and balance. They’re the things she’s striving for, while knowing she’s never going to fully get there. “Peace for me comes in glorious moments, like sitting in a restaurant with an amazing glass of wine and the best damn risotto you’ve ever had. Those are the moments that make me realize I’m happy to be alive, and the rest is just noise. I can’t live in those moments every second. But maybe growing up is about getting better at being aware of when you’re having them.”

One thing’s for sure: She’s already figured out how to revel in them.

What is the last great book you read?
Eat, Pray, Love. I am late to the party, but I finally got there.

What part of the world is next on your list?
Paris.

Who do you consider a misunderstood historical figure?
Jesus.

What is your guiltiest pleasure?
Gossip Girl.

Which words do you most overuse?
Dude and genius . . . ”Dude, that is genius!”

Which gadget could you never give up?
My BlackBerry.

Who has been the most influential political figure for you?
Obama.

What song do you sing in the shower?
“Defying Gravity” from Wicked.

What’s your favourite cocktail or drink?
An Eastside cocktail, which is gin, muddled lime, cucumber and mint.