What role do men play in the fight against sexual assault?

An increasing number of “male allies” want to be part of the solution in Canada — and that can be complicated. 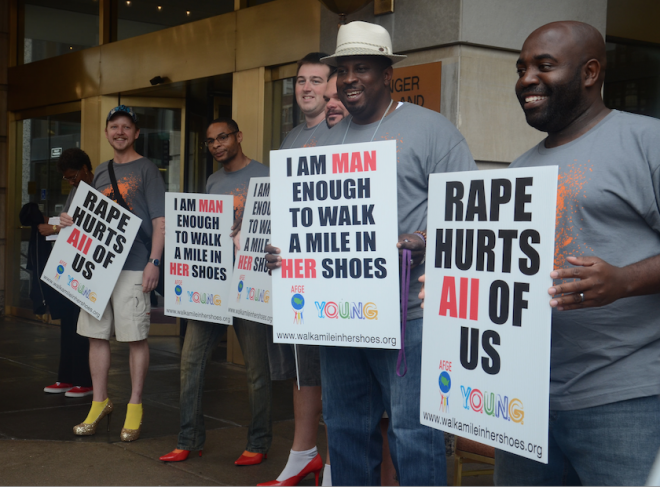 Walk a Mile in Her Shoes events are held in cities across North America. Photo, AFGE/Flickr.

Ottawa women’s rights activist Julie Lalonde has spent more than a decade raising awareness of sexual assault and gender-based violence, all the while experiencing constant harassment by men on and offline. She regularly receives rape and death threats on social media, and whenever she presents a workshop or gives a speech, she always makes sure to have an escort walk her to and from her car. It can be discouraging and emotionally draining to see how much work still needs to be done. But one thing that gives her hope is the rise of the male ally: men who are signing up to support the movement to combat sexual assault and rape culture.

“A huge part of deconstructing violent masculinity depends on men having open conversations about it with other men,” Lalonde says. “And we’re seeing great stuff happening in Canada right now.” She points to efforts like Ontario’s new sex-ed curriculum (which includes topics about consent and healthy relationships) and sexual assault centres across the country that are bringing men on board to run programs to educate other men. On May 21, hundreds of male allies are expected to descend on Toronto’s Yonge-Dundas Square in high heels for the annual Walk a Mile in Her Shoes event to raise money for the White Ribbon Campaign, an organization devoted to ending violence against women. The group holds similar marches in Windsor, Red Deer and dozens of other North American cities year-round.

Still, the idea of the male ally is complicated. Many in the women’s rights movement find it heartening that more men want to engage with the issue. But others feel that this is a conversation that, by definition, should be led by women out of respect to survivors of trauma committed by men.

Joan Tuchlinsky sees it both ways. She’s the public education manager of the Sexual Assault Support Centre of Waterloo Region in Kitchener, Ont. In 2008, the centre started its Male Allies Against Sexual Violence (MAASV) program. “At the time, we just felt like we weren’t addressing the underlying issues that create an environment where sexual violence is more likely to happen,” she says. Now, the program has grown to include 23 male volunteers who facilitate workshops that teach men how to talk about sexual assault and prevent it, including a 12-week program for middle-school boys, the Building on Youth Strength (BOYS) Club. In its first year, several hundred men and boys attended MAASV workshops. Last year, the number of voluntary participants hit close to 3,000.

A typical workshop will begin with leaders asking men to explain how they protect themselves against sexual assault. “Usually, they just sit there quietly, looking at each other,” says Tuchlinsky. “For the most part, men say they don’t even think about it — that it’s not their reality.” From there, the group will discuss how women respond to this question in surveys. Common responses from women include not walking home alone at night, crossing the street when passing a man and carrying their car keys in their hand as a potential weapon.

Judah Oudshoorn, a professor of criminal justice at Conestoga College in Kitchener, became a member of the MAASV program in 2008 after taking one of its workshops, which he now presents with other volunteers. “Our society is going about raising men and boys with the idea that they have to be tough and stoic, a society in which men feel like they can take what they want, when they want,” he says. As someone who grew up with an abusive father, Oudshoorn says the program provides tools for him to challenge traditional notions of masculinity and help other young men and boys do the same. “Many men and boys are hungry for a different form of masculinity.” An important part of being a male ally is sharing those lessons, Oudshoorn says. He regularly talks about feminism and consent with his two children, who are in grades two and four.

Last fall, the Ottawa Coalition to End Violence Against Women started its I Can MANifest Change Project, targeting young men between the ages of 13 and 18. As the project’s coordinator, Matt Schaaf has conducted workshops for more than 600 people in local schools, community groups and youth detention centres. Schaaf says he was drawn to this effort after friends and family members disclosed to him that they had suffered gender-based violence. “I’ve never felt at home with the kind of manhood you see expressed in mainstream stereotypes,” he says. “So I’m all about looking for other ways of being a guy that are just as valid and encompass being able to have feelings and emotions.

The campaign also includes a series of public service announcement videos, including one that features Ottawa Senators defenceman Marc Methot calling on men to respect women. Hundreds of students have taken to Twitter to pledge to end violence against women using the hashtag #manifestchange. “This isn’t usually a conversation that’s easy for men to have, let alone in public,” Shaaf says. “So we are trying to create an environment where guys feel like they can be part of the solution.”

While men’s involvement is welcomed and appreciated by many women working on these issues, it can also highlight serious problems with the movement. Tuchlinsky and Lalonde describe how they often experience pushback and criticism from men and women when they speak and facilitate workshops for men and women, but when men do it, they are uniformly praised and congratulated for taking a stand. It can be frustrating when men are credited with achieving things women have been trying to achieve for generations. “I could say something and a male colleague could come in and say the exact same thing, and what he says will have more weight,” says Lalonde.

Some worry that inviting men into the education and recovery processes is potentially damaging to women who have suffered trauma at the hands of men. In extreme cases, men get involved for all the wrong reasons, using it as an opportunity to build trust with women, then exploit that trust. Lalonde gives the examples of Jian Ghomeshi, who self-identified as a feminist and often discussed the importance of gender equality on his radio show, and the case of a male Carleton University student and feminist who was sentenced to jail this month for raping a woman in 2010.

“There, you had somebody who is claiming the label of feminist, who is saying all the right words, but who is in fact using that to perpetrate violence against women,” she says. “I believe so much in engaging men in this work, but at the same time, we need to have empathy for women who might be distrustful.”

That’s why one of the most important characteristics of a male ally is someone who recognizes when it’s their moment to speak, and when it’s time to step back and let women take over. “We’re not asking men to speak for us, we’re asking men to speak with us,” says Tuchlinsky. “We’re saying that we want women to lead on this topic, we just don’t want to do it alone.”