'This changed me.' The lasting impact of the Ghomeshi scandal

It's been exactly one year since Jian Ghomeshi was fired from the CBC, the first in a series of events that would lead to his arrest. We asked seven women to reflect on how that day affected their work and their lives. 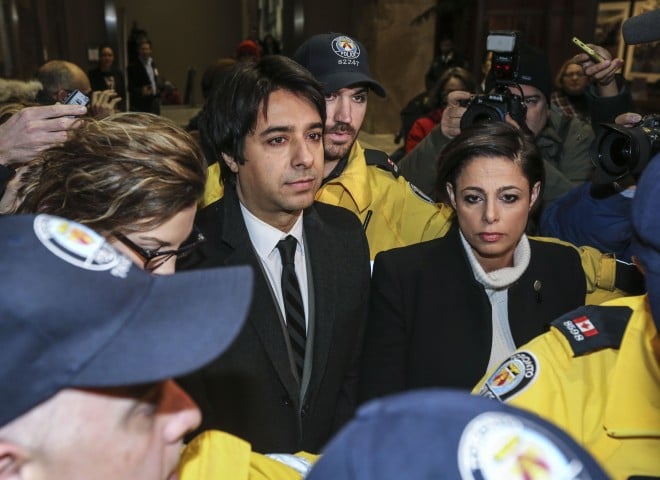 Exactly one year ago, on October 26, 2014, the CBC cut ties with its golden boy, Jian Ghomeshi. That same day, the honey-voiced Q host fired back with a $50-million lawsuit. By evening, he’d posted a public statement on Facebook that claimed the CBC had fired him because of his sex life, confessing his taste for “role-play, dominance and submission.” Legions of fans rushed to his defence. Then, an hour before the day came to a close, the Toronto Star published the explosive allegations that Jian Ghomeshi had sexually assaulted several women, and everything turned.

The events of that day hit like a brick to a window — a “where were you when” moment for a great many Canadians. Regardless of how Ghomeshi’s trial plays out in 2016, we’re still feeling this scandal’s repercussions a year later. It led to thousands of conversations about sexual violence, workplace harassment and abuses of power. For those at the core of it — the survivors who came forward, the CBC employees who lost their jobs and Ghomeshi’s family — the fallout is ongoing and severe. But even for many further afield — crisis workers and policymakers, journalists and former colleagues — the scandal has had a powerful, lasting effect. We asked seven women to look back at the past year and explain how that day impacted their lives and their work.

Piya Chattopadhyay is a CBC Radio journalist who guest-hosted Q after the scandal broke, the morning the Toronto Star published a story detailing allegations from nine women who said Ghomeshi had assaulted them. “That second story from the Star was, for me, the hardest thing to digest and hard because I had to go on Q that morning. I knew we were going to have to address it. I didn’t know how we were going to address it. I was very emotional. I knew everyone was going to be listening that morning. It was a real balance to strike. [A colleague] and I came up with 30 words that took 16 seconds to deliver. I just said to myself: You’re a human, you’re a Canadian, you’re a professional, you’re a broadcaster. You’re all of these things together today. I took a deep breath before I went on air, and I did it. But I could barely get through those 30 words without crying.” (Those words, actually 26, were: “We’re reading what you’re reading. And we’re hearing what you’re hearing. It is tough. And we want to thank you for being here. We are Q.”) “There is no denying how difficult that period was for me, both professionally and personally. It was harder than I could have imagined. A year later, I still don’t know why it was, in some ways, so difficult. I don’t want to gloss over how difficult the last year has been for so many people. And not to sound saccharine, but there have been gifts. It’s taught me how to talk with my three kids about why her mom works, why her mom loves her work and needs to be at work. We tell our kids not to hurt people and hit them — allegedly, I guess. It’s made me think about myself. I’m a much better broadcaster than I was a year ago — I have been much more human on air, I wear my emotions louder. I say this jokingly but often: I think it helped throw me into some kind of midlife crisis, taking stock of my life. It made me think about the CBC a lot, and how much I love the people who work here. People can say all they want, but all I know is through one of the most difficult periods of this company’s history, we did really good work and we treated each other very kindly.”

Judy Rebick, author, activist and founder of rabble.ca, was a weekly guest on the Q Political Panel. “As the stories came out and I realized how grave what he had [allegedly] done was, I was really freaked out because I’ve known him since he was 19 years old. I had met him around the Henry Morgentaler [pro-choice activism]. He was probably the first man I’d ever met who called himself a feminist. I always think I have a sixth sense about violent men, so I couldn’t understand how I couldn’t see any of it. It triggered in me a sense of betrayal, even though it had nothing to do with me. I would say that I was a little debilitated by it. I felt betrayal, I felt grief, I lost a person in my life who I thought was in my life, basically. Someone asked me if he called me and asked for support, would I support him? I answered ‘No, because I would be afraid of him.’”

Sue Montgomery is a former Montreal Gazette crime reporter and co-founder of the social media campaign #BeenRapedNeverReported, which launched in the days after the Ghomeshi scandal broke. She subsequently left her job and sought the NDP nomination in the Montreal riding of Notre-Dame-de-Grâce—Westmount. “As a journalist, I’ve written many articles, I broke a big story about sexual assault at College-Notre Dame, but nothing — nothing — had the impact 140 characters had. I did no interviews, no research, no quotes, no nothing. And this has been probably the biggest thing of my career. This changed me for sure. Now I’m out of journalism. I’m giving talks to schools, all about the hashtag and what’s changed and hasn’t a year later. For a lot of survivors of sexual assault, it can destroy their lives. I’d like to show people that it doesn’t have to. It certainly has made me what I am today. I don’t take any bullshit. But it took many years to learn that what happened to me wasn’t my fault.”

Julie Lalonde is an activist who works with the Ontario Coalition of Rape Crisis Centres. “Last fall was the biggest shift in conversation we’ve seen on sexual violence in our lifetime. Unprecedented media coverage, unprecedented survivor disclosures. We cracked the shell open on not just the Jian story and workplace sexual harassment, but there was an explosion of conversation on campus because of what happened at the University of Ottawa , and then on Parliament Hill and then my own experiences with the Deschamps report around military sexual assault. I do think we’ve moved forward a significant amount in the past year, and now we’re seeing some progress.”

Gillian Hnatiw is a partner at Lerners LLP and represented Lucy DeCoutere, a complainant in the Ghomeshi case, at the October pre-trial hearing. “I’m not suddenly seeing the floodgates open. What I would say is Ontario’s Action Plan to prevent sexual violence, is, legally speaking, the biggest change to come out of the whole Ghomeshi story. That was the biggest cause and effect change I saw. There are quite a few concrete policy statements in there that will lead to legal change that I think will make it easier for victims to come forward in the future. The fact of the matter is, all of the systemic barriers that existed pre-Ghomeshi and worked against women coming forward are, for the most part, still there.”

Laura Williams is a Toronto labour and employment lawyer and principal of Williams HR Law who works on workplace sexual harassment cases. “I think when you have heightened social awareness, even the government moving toward tightening up some of the sexual harassment laws, you have more of an inclination from employees to report. We are seeing more activity in that respect. The story, and other high profile cases, also gave us an opportunity to break through the message that says, ‘Listen, you will be held accountable as employers under law, not to mention the impact it will have on culture, morale and on your brand if you don’t address these issues.’”

Sally Armstrong is an activist and author of Ascent of Women: A New Age is Dawning for Every Mother’s Daughter. She wrote a column for the Toronto Star in the wake of the Ghomeshi scandal, calling on Canadians to seize the opportunity for change that “presented itself like a dawning.” She particularly called on men to step up. “Immediately after the column, I had a phone call from a very well known Canadian man with lots of connections. He said, ‘Pick a Saturday—any Saturday that doesn’t have a Santa Claus Parade on it and I’ll organize a march of the men.’ I said ‘I hope you do. I’d be willing to help.’ But I never heard from him again. It didn’t surprise me because it takes a lot of effort to alter the status quo. The Jian Ghomeshi thing was an incident — that goes on in most offices across Canada today. And who’s going to do something about it? And I don’t believe a single incident has stopped because of the Jian Ghomeshi story.”