From the bride's dress to the Canadian bridesmaids to an...interesting reading, here's what happened at the second royal wedding of the year.

Princess Eugenie wore a stunning off-the shoulder wedding gown with a full-skirt and long train. She specifically asked the London-based designers to give her a low-back because she had surgery at 12 to fix her scoliosis, and she wanted to show the long scar down her back. The gown’s design featured a number of symbols woven into the dress. There is the thistle of Scotland to represent the couple’s love of Balmoral (the Queen’s home in Scotland), a shamrock for Ireland where Fergie’s family is from, the York rose, and ivy for the couple’s home. 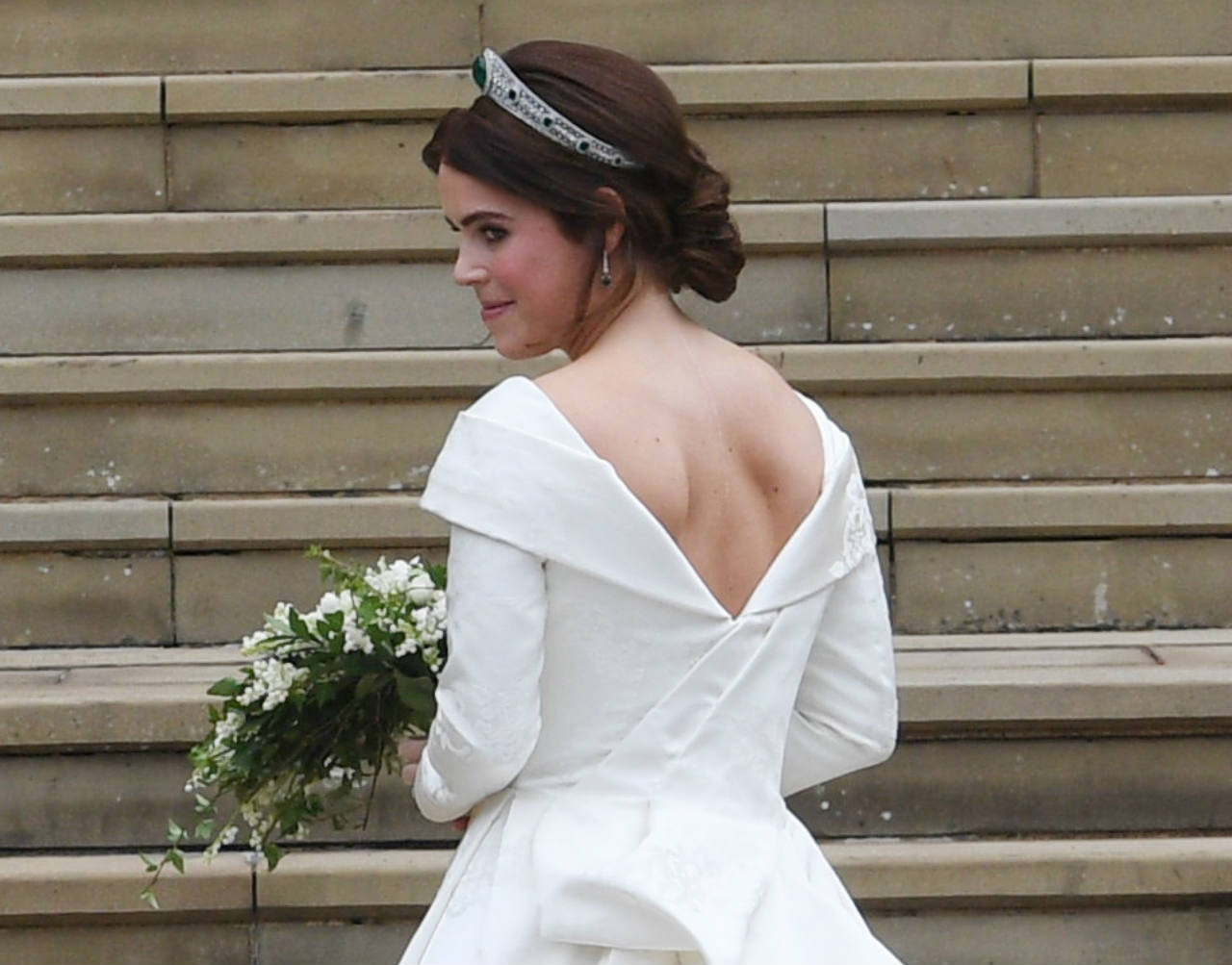 Of course, Princess Eugenie also got to wear a tiara — courtesy of Granny the Queen — and this is one no one in the royal family has worn before. The Greville Emerald Kokoshnik Tiara features diamonds and emeralds; to match it, Jack gave his bride matching diamond and emerald earrings. 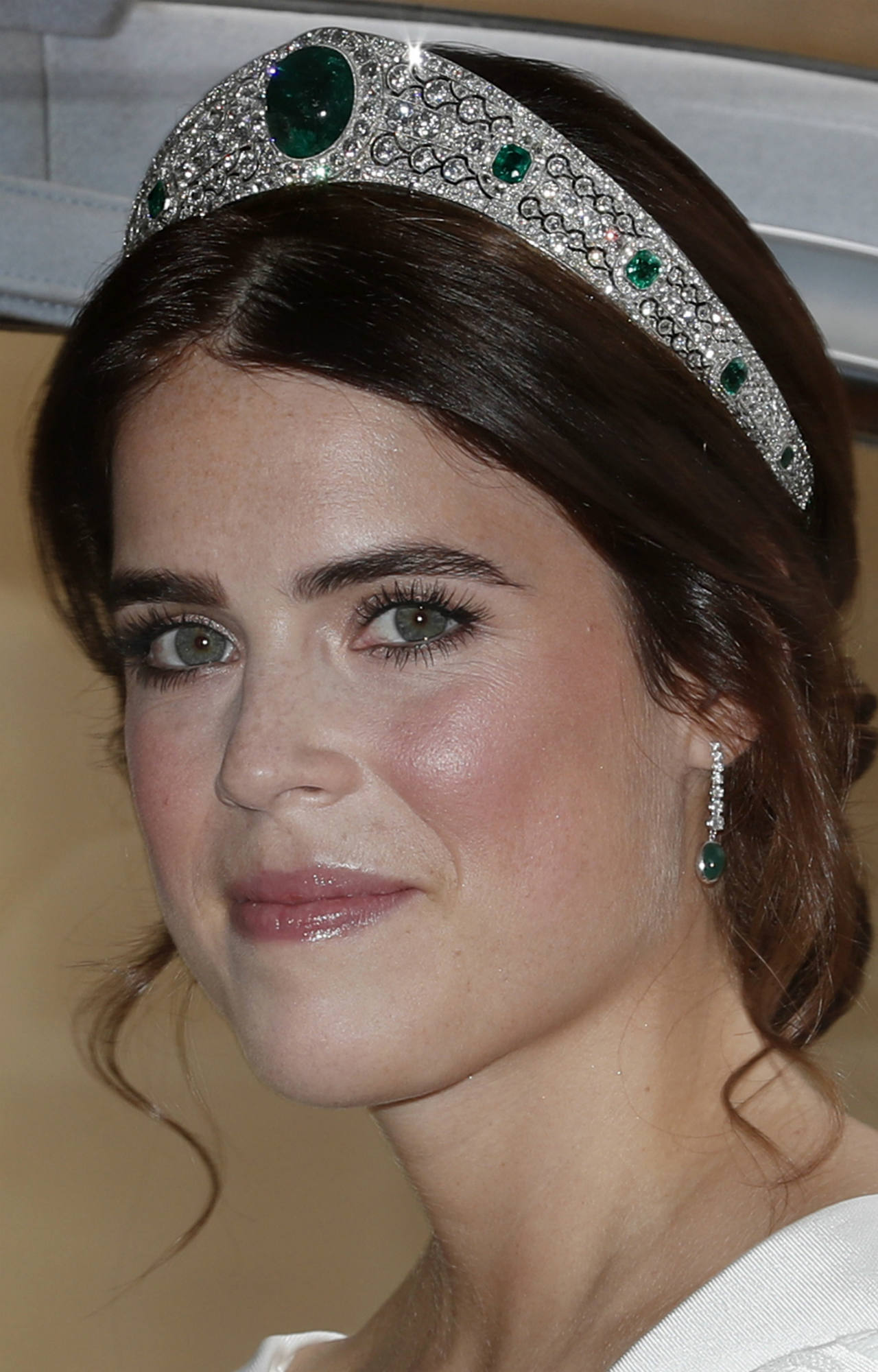 2. The groom and his glasses

As the groom waited for his bride, he looked quite nervous, fiddling and blowing into his hands. Jack was wearing his glasses and looking quite charming. He doesn’t usually wear them at public events. Clearly, he wore them so he could see Eugenie perfectly. He was beaming as soon as he spotted her walking down the aisle, and looked to be whispering to his best man and brother “my heart.” When Eugenie reached him, he took off his glasses and handed them off to his brother. Then adorably, he looked to be tearing up. 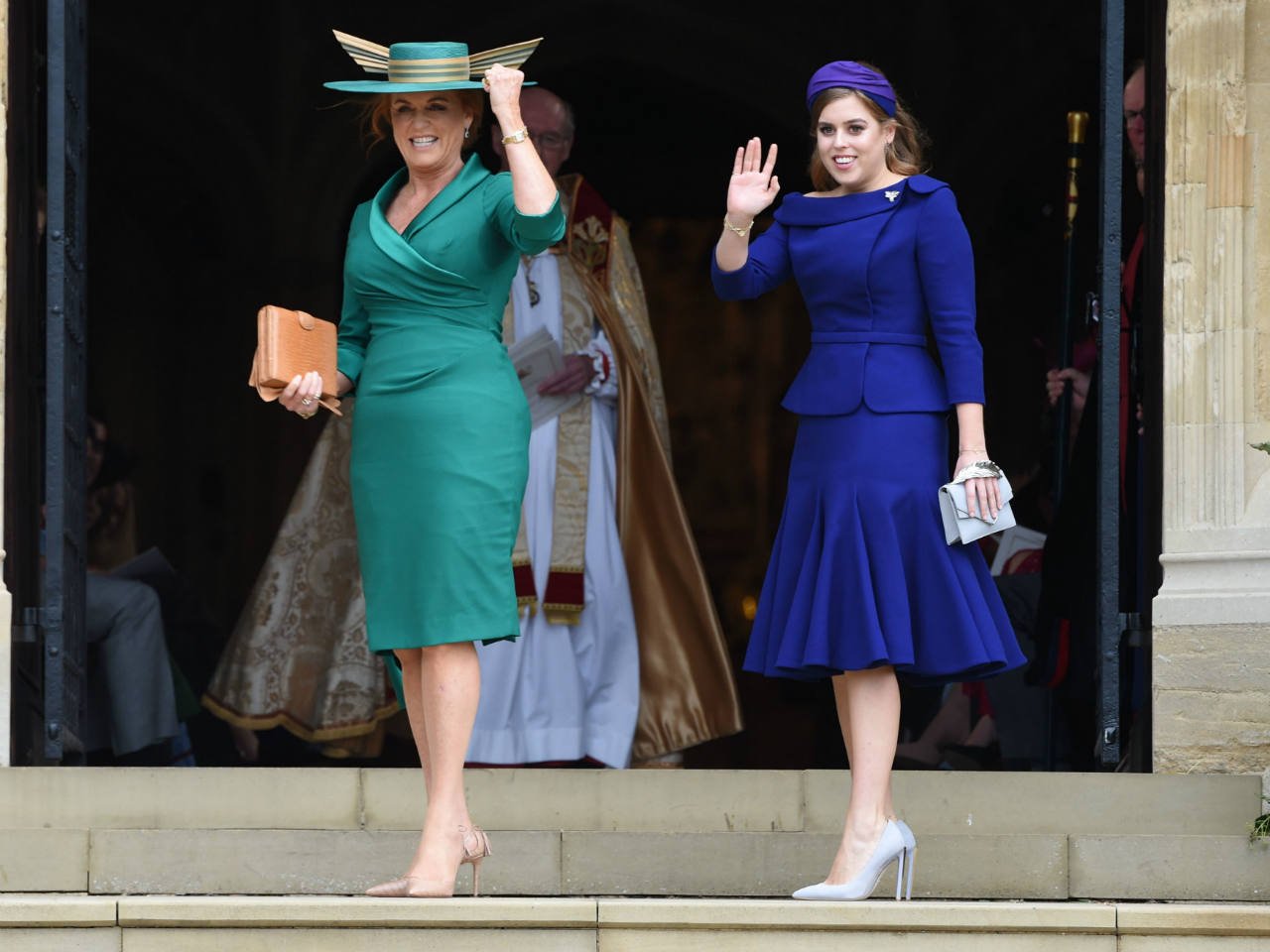 3. An untraditional maid of honour

Princess Beatrice served as her sister’s maid of honour, but she had a rather untraditional entrance. She didn’t walk down the aisle with Eugenie or the bridesmaids and pageboys. Instead, Beatrice — gorgeous in a royal blue Ralph & Russo dress — walked down the aisle almost twenty minutes before the bride, alongside her mother, Fergie. And she didn’t stand beside her sister during the ceremony either. She sat with her mom in the front pews. I am guessing this is so her mom didn’t have to sit by herself during the ceremony — Fergie isn’t known for having the most cozy relationship with the royals. 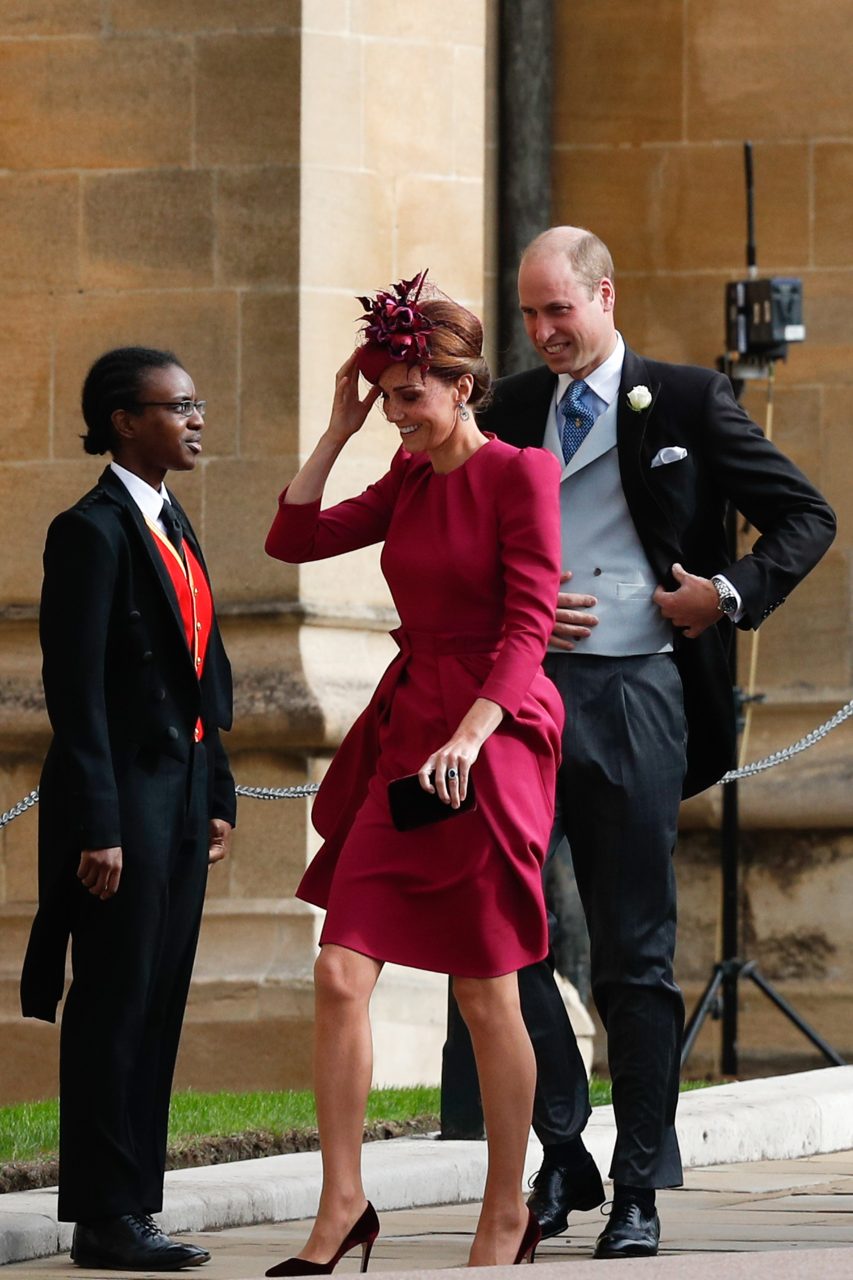 Listen, Duchess Kate has a bit of a strategy when it comes to weddings — she tends to re-wear something she has in her closet as to not take attention away from the bride. For Prince William’s cousin Zara’s wedding back in 2011 she wore a DAY Birger et Mikkelsen brocade coat that she had owned for years. And for Meghan and Harry’s big day, she wore a new Alexander McQueen coat dress in a buttercup yellow, but the design was the same as the outfit she wore to Princess Charlotte’s christening, except that piece was white. (The outfit was so similar, people thought she was re-wearing the same coat.) But on Friday, the Duchess of Cambridge stood out in a beautiful raspberry Alexander McQueen dress (of a similar design to one she wore to Trooping the Colour back in 2017) paired with a Phillip Treacy cocktail hat. 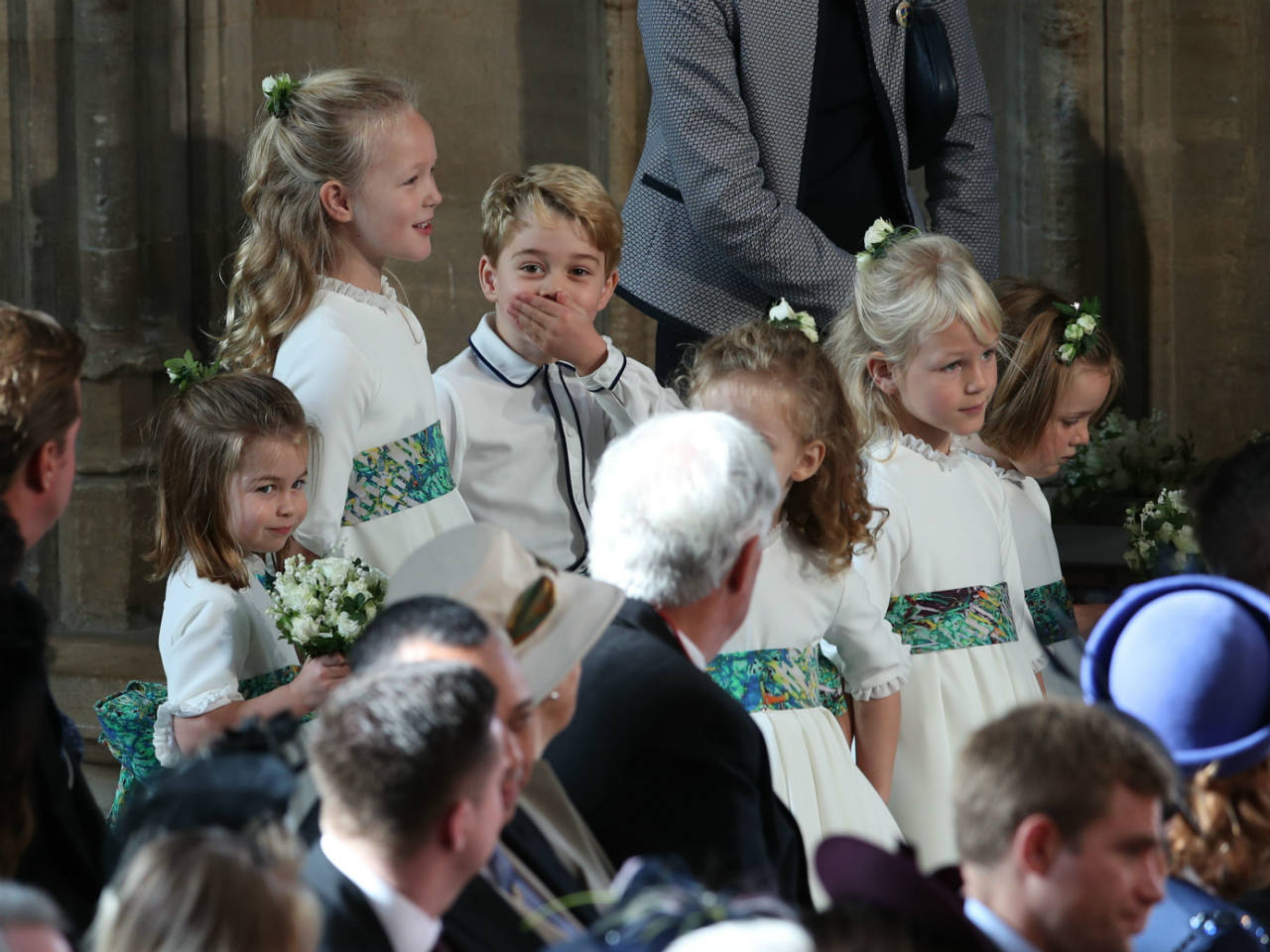 Prince George and Princess Charlotte were once again in the wedding party, just like they were for Uncle Harry’s wedding. But there were also two Canadians in the bridal brigade — Savannah and Isla. The Queen’s eldest grandson Peter is married to Autumn, who is from Montreal. They have two daughters together (Savannah and Isla) and the blonde cuties were both bridesmaids for Eugenie and Jack. At seven years old, Savannah was the oldest member of the bridal party and looked to be keeping everyone in order. Though, hilariously, when the group got to the end of the aisle, they didn’t want to leave and both Eugenie and Prince Andrew had to keep nodding at them to go, but the wouldn’t. Finally, they were shepherded off to a back room to play during the ceremony. 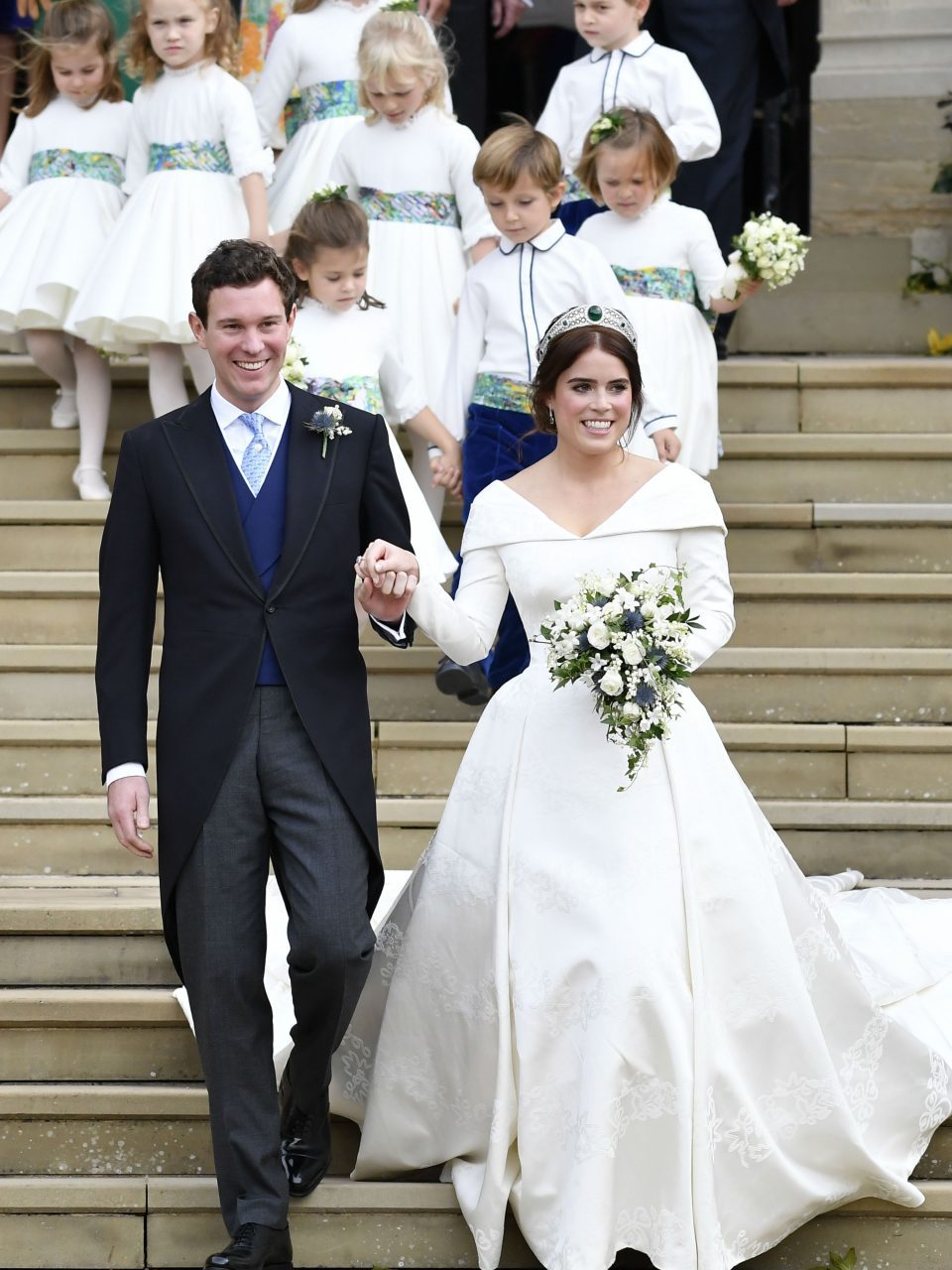 6. There was a reading from…The Great Gatsby?

Princess Beatrice gave a reading from The Great Gatsby during the service which at first left people confused. Does the couple know how that novel ends? But the meaning was quickly explained. After meeting Jack, Eugenie was reading The Great Gatsby and the passage read reminded her of Jack’s smile. How it had an “eternal reassurance in it” and always seemed to have “an irresistible prejudice in your favour.” Still, some pointed out choosing a reading from a novel about a con man was an…interesting choice.

7. Charles, but no Camilla

If you looked in the pews, you may have noticed that Camilla was missing. The Duchess had a day of engagements planned in Scotland today and unfortunately had to miss the wedding. Royal duties are planned months in advance and I am sure Camilla didn’t want to disappoint the people (including school children) she was supposed to meet. The royals send out potential dates to the most senior royals and find a day that works best for the most people. Despite rumours that this is a snub I truly think this is just a case of being double booked. 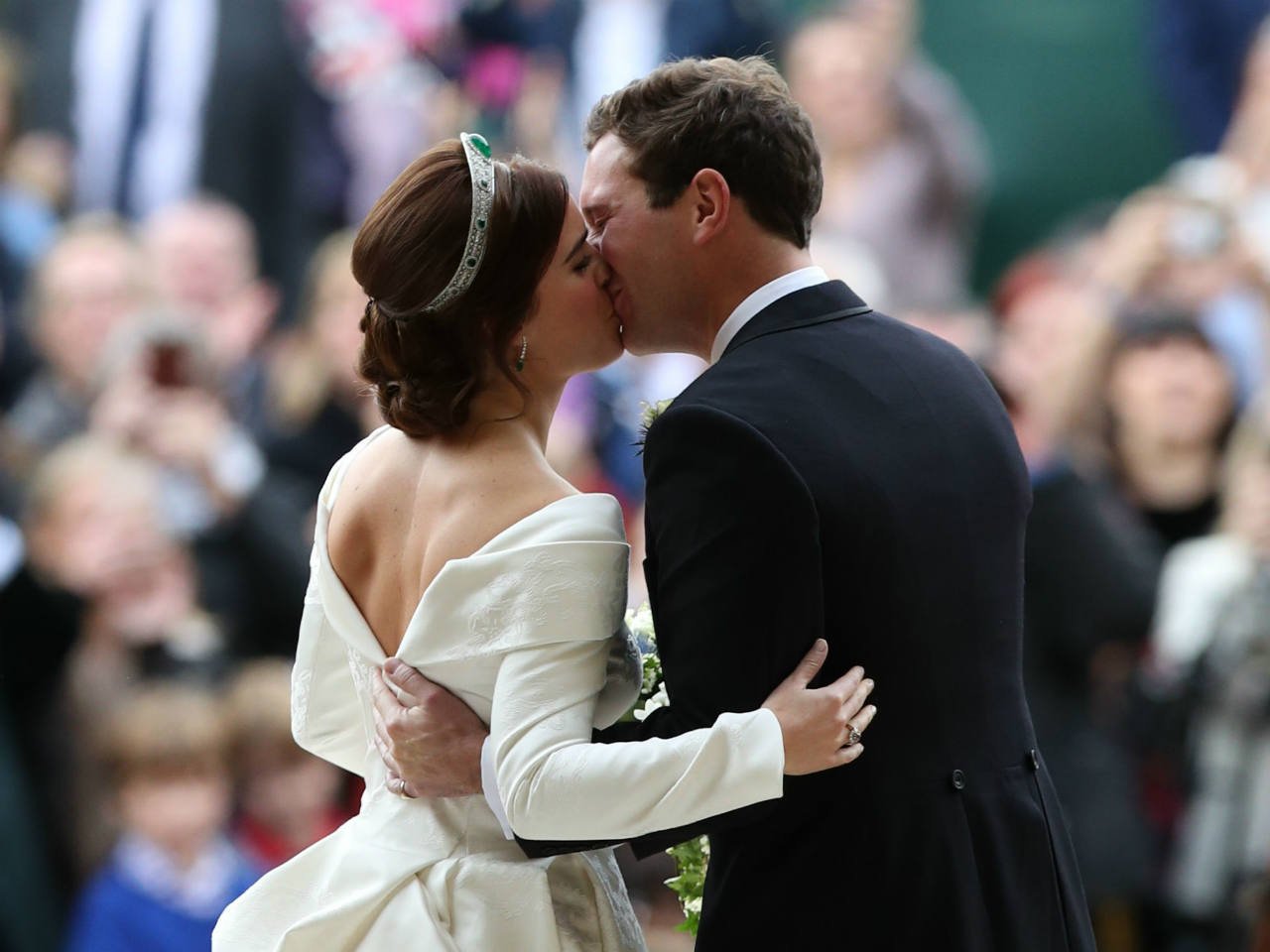 When the couple left the chapel and greeted all the well-wishers outside, they had to give them a kiss. But before stepping into their Scottish State Coach, they snuck another quick peck.

Both of Prince Harry’s exes, Chelsy Davy and Cressida Bonas, who attended his wedding back in May, were on the guest list again for Jack and Eugenie’s wedding. Eugenie is very good friends with Cressida and is actually thought to be the one who set up Harry and her friend. And she remains quite tight with Chelsy, often wearing pieces from her jewelry line. 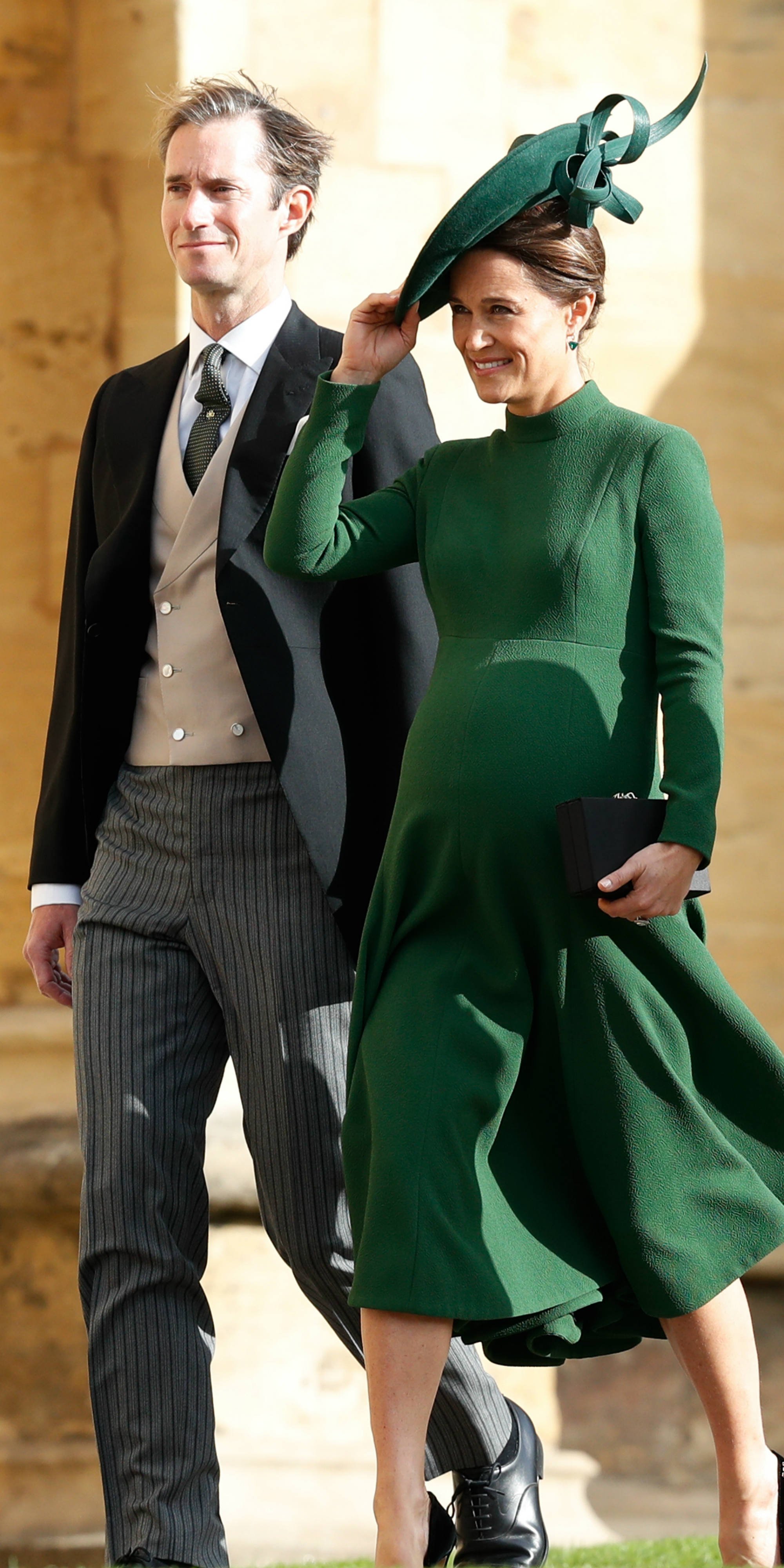 Of the 850 guests lucky enough to score invites to the wedding, many were celebrities. You had Cara Delevingne (in a suit and top hat), Ellie Goulding, Naomi Campbell, Kate Moss, Liv Tyler, Robbie Williams (whose daughter was a bridesmaid), Downton Abbey creator Julian Fellowes, James Blunt, Pippa Middleton (who is due to give birth very soon) and Demi Moore. Sadly, George and Amal Clooney were not in attendance. Jack works for Casamigos, George’s tequila company so we were all hoping the couple (well, mainly Amal in a fabulous hat!) would grace the castle walls again.