Trudeau's sunny ways are no match for Trump's American carnage

Positive thinking can't get us through the current crisis. We need our PM to level with us. 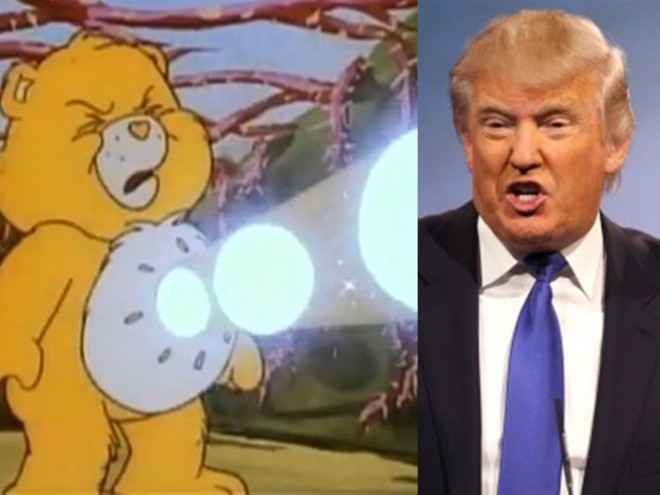 On election night in October 2015, Prime Minister Justin Trudeau quoted Wilfrid Laurier in his victory speech: “Sunny ways my friends. Sunny ways. This is what positive politics can do.” With a campaign that emphasized openness and optimism as an antidote to Stephen Harper’s sullen scare-mongering, Trudeau had coasted to a majority government.

And it felt good to feel good. To celebrate the 50:50 gender split in Cabinet, to welcome Syrian refugees, to see fledgling movement on the recommendations of the Truth and Reconciliation Report. For a time, Trudeau’s optimism felt exactly right.

Then came Brexit and Donald Trump. The global refugee crisis worsened and there was a surge in anti-Islamic bigotry in the U.K. and the U.S. Meanwhile, xenophobia had been festering here for some time, helped along by politicians and pundits warning of threats to so-called Canadian values.

While hate crimes in Canada fell overall from 2012 to 2014, in that same time period, attacks against Muslims more than doubled. The bigotry in Quebec, where Muslims make up just three percent of the population, has been especially fierce, with right-wing columnists and hosts of radio poubelle (garbage radio) raging about headscarves and women-only swimming sessions at community pools.

Then the nightmare happened: Six men killed and 19 others seriously wounded while praying in their Quebec mosque. And in the days that followed, still more hate crimes were reported in Montreal.

Related: Quebec’s Muslims have long been reminded that we’re outsiders

The world is suddenly shaky underfoot: Last week, scientists moved the hands on the Doomsday Clock, a symbolic timer that counts down to global catastrophe, ahead 30 seconds. That’s the closest it’s been to The End since 1953, when hydrogen bombs were tested in the U.S. and the Soviet Union.

Trudeau’s optimism is no longer a match for the very real dangers we face. Positive thinking and platitudes will not get us through this growing crisis. We need our leader to level with us — and we need more from him than subtweets and broken promises. He’s in a difficult position regarding the increasingly erratic and isolated U.S. president, who has threatened his own citizens and insulted allies like Mexico and Australia. But we need to know that when it comes to what’s happening within our own borders he’s willing to practice what he preaches.

When Trump’s Muslim travel ban took effect on the weekend, the Prime Minister tweeted: “To those fleeing persecution, terror & war, Canadians will welcome you, regardless of your faith. Diversity is our strength #WelcomeToCanada.” It was lovely, but also meaningless. The Prime Minister has no apparent plan to bolster our refugee program and, in December, his government actually capped privately sponsored refugee applications for Syrian and Iraqi families (they’re limited to 1,000 for 2017, a number that officials say is already maxed out).

The people detained at U.S. airports had green cards and visas. They were students, scientists, translators, academics, grandparents and children. Without warning, it was unclear whether they would be able to resettle in the U.S. as planned, return to their jobs and schools, reunite with their families. In the face of this calamity, Trudeau’s tweet felt cheap — a way to score political points without doing anything that actually helped those who were stranded. 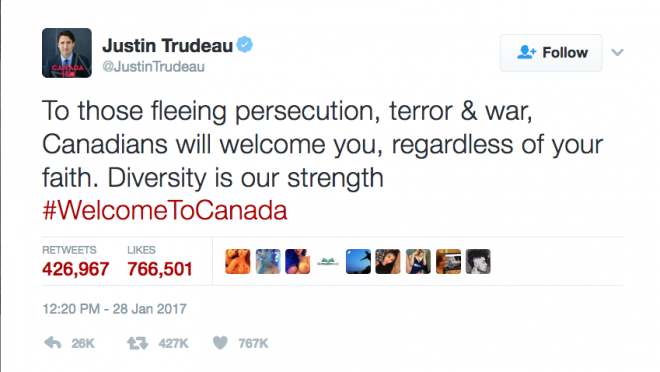 Canada has been and remains a sanctuary for many, many people. But we’ve gotten far too good at telling ourselves that our democracy and our inclusiveness are inherent, inevitable and singularly Canadian ideals. A quick scan of history and current newspapers offers plenty of evidence to the contrary.The fairness and safety we enjoy were never a given, they were the result of human effort — and they can be taken away in an instant by an angry, hate-filled gunman.

In stories about the six men killed in Quebec — all of whom were immigrants — it’s been noted that they came to Canada seeking better lives. It’s comforting to think that “better lives” are so easily had here. But what gets left out of that story is all the effort required to build a new life. And what’s ignored are the daily indignities that must be soldiered through, the pain at hearing politicians and pundits imply that you are “barbaric,” the loneliness of being made to feel, in all kinds of ways, large and small, that you are an outsider who should feel grateful for Canada’s largesse. We praise immigrants for their hard work in settling here, but we rarely question why it must be so very hard in the first place.

Related: There is a child suicide epidemic in Canada — why is it being ignored?

If our country is to stand for something, then our optimism needs muscle behind it. The Prime Minister can’t simply talk about diversity being our strength, when there is an epidemic of suicides in First Nations communities, when caps have been put on refugee programs, and when far-right, white nationalist ideology has taken root — and taken lives — here in Canada. None of us can.

When U.S. president Barack Obama came into power eight years ago, he buoyed his country, and the world, with his message of hope. When he left office last month, alluding to the difficulties he knew were coming, he told his nation not to take democracy for granted. “America is not a fragile thing,” he said in his farewell address. “But the gains of our long journey to freedom are not assured.” In other words: get back to work, people. Resist. Speak out. Organize.

Likewise, our prime minister needs to set aside Laurier’s sunny ways and look to another legendary Canadian politician for inspiration. Tommy Douglas, the father of universal health care, created one of the greatest social and economic equalizers in our country’s history. He never pretended it was easy and he never suggested the work was over. “Social justice,” he said, “is like taking a bath. You have to do it every day or pretty soon you start to stink.”
More:
Everything you need to know about the Keystone XL pipeline
Oh BEY-by! Everything you’re dying to know about Beyoncé’s pregnancy announcement
The 15 coolest libraries in Canada