The federal leaders turn their attention to women

Four of the federal leaders will participate in a women's issues event tonight. Here's what to expect. 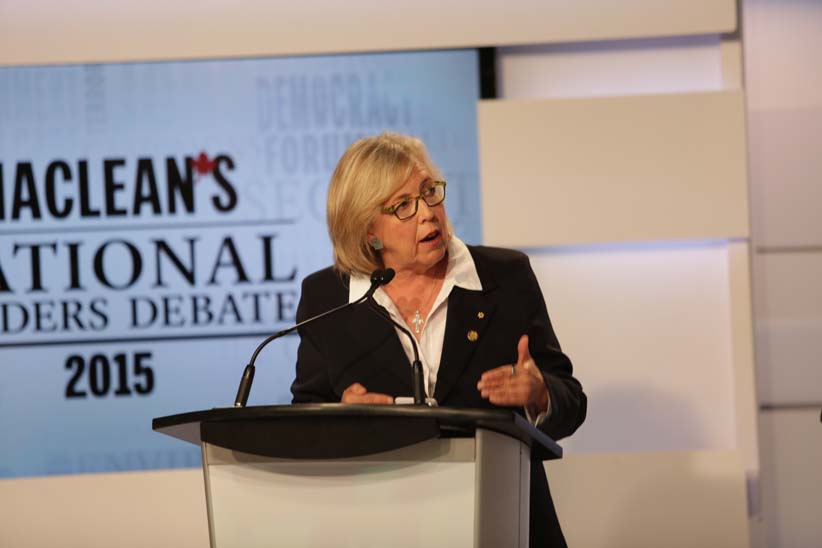 Elizabeth May at the Maclean’s debate in August. Photo, Dillan Cools/Maclean’s.

Fact: The word “women” was mentioned just four times during the course of the first election debate. But at Monday’s Up for Debate, billed as a “pan-Canadian conversation on gender justice and equality,” the federal leaders will do a little better than that.

The event, organized by a coalition of more than 175 women’s organizations and taking place at the University of Toronto’s Isabel Bader Centre, is a rare opportunity to hear Canadian politicians share their views on topics that directly effect female voters.

We spoke to co-organizers Kelly Bowden and Melanie Gallant to get the scoop on what to expect from Monday’s festivities:

1. Not Stephen Harper. Originally planned as a live debate on women’s issues, the event was cancelled after Harper declined participate and NDP leader Tom Mulcair pulled out. It has been reformatted with pre-taped interviews (conducted by Francine Pelletier, a journalist and founder of feminist paper La Vie en Rose) with Mulcair, Green Party leader Elizabeth May, Liberal leader Justin Trudeau and Bloc leader Gilles Duceppe. Harper declined an interview.

2. “Women’s issues.” In this election, we’ve seen candidates waxing political about the economy and foreign policy, but this Monday evening, they’ll field questions on increasing rates of violence against women, economic inequality between the sexes and women in leadership. (For a teaser, here’s Elizabeth May on high unemployment rates among women with disabilities.)