What Conservative opposition to an anti-Islamophobia motion really means

While Liberal and NDP MPs have supported the symbolic motion, members of the CPC have been tripping over themselves to prove who is most offended by it. Here's why their arguments don't hold. 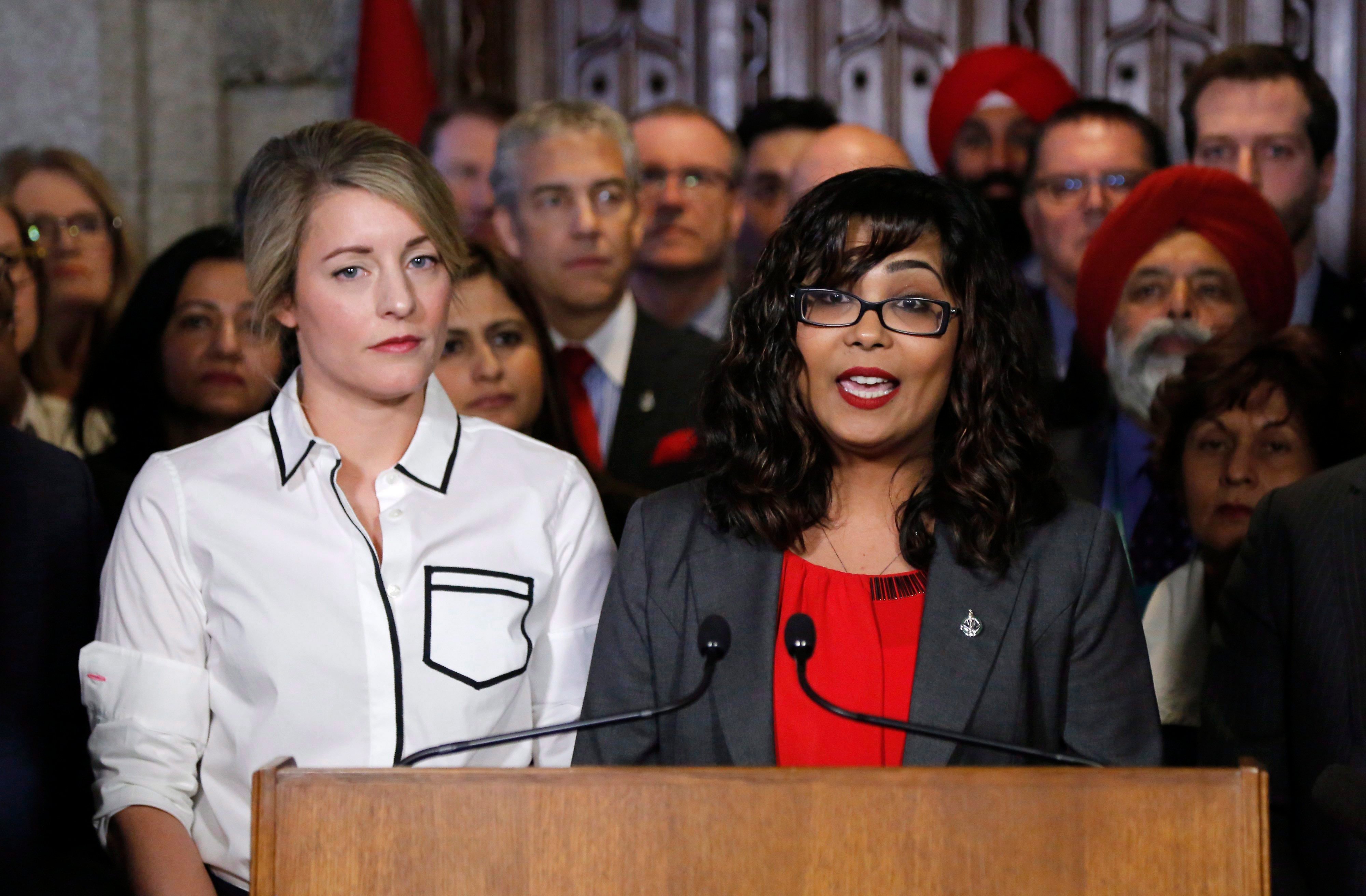 In December, Iqra Khalid, a backbench Liberal MP from Mississauga, proposed a motion (M-103) that urged the government to condemn Islamophobia and recognize “the need to quell the increasing public climate of hate and fear.” It also called for the heritage committee to study how the government can help reduce systemic racism and religious discrimination (including but not limited to Islamophobia), examine hate crimes, and assess the needs of impacted communities.

Practically, approval of this motion does little more than send a message of solidarity to the Muslim community. I’m not normally into platitudes, but as a Muslim, I was shaken by the spike in hate crimes both in Canada and the U.S. that immediately followed the election of Donald Trump. After he took office, he issued a travel ban directed at Muslim-majority nations; that same weekend, a man who believed immigration posed a threat to the white race opened fire on a mosque in Quebec. So any expression of recognition that anti-Muslim sentiment is at a frightening level is a comfort to me.

Not so comforting? The reaction to this motion by some Conservatives, including some hoping to lead that party, who used it as a way to pander to racists.

Related: Depressed about Trump’s victory? Don’t feel hopeless. Do something.

When Khalid opened the motion for debate in the House of Commons on Wednesday, Liberal and NDP MPs supported the motion, while a number of Conservative MPs criticized it, citing a multitude of concerns — from the motion being a threat to free speech, to the word “Islamophobia” being inadequately defined. To be clear: A symbolic motion that recognizes the impact of hatred towards Muslims, two weeks after six Muslim men were shot and killed in a mosque in Quebec, is being fiercely debated. And it’s not just fringe Conservatives who oppose the motion — interim party leader Rona Ambrose said she won’t vote for it unless an amendment is made to make it more inclusive. Leadership candidate Lisa Raitt also said she won’t support the motion. Michael Chong supports the motion, but told the CBC that he’s concerned the Criminal Code’s treatment of hate crimes suppresses free speech.

Let’s look at the points of contention around M-103, to see if we can get to the bottom of this thing.

The motion doesn’t contain a definition for Islamophobia: A number of Conservative MPs took issue with this, including Ambrose, who explained her concerns in a Facebook post: “I do worry that some of my work trying to empower women and girls in Muslim communities could be branded as ‘Islamophobic’ if I criticize practices that I believe are oppressive.” Khalid, however, did offer a definition on Wednesday night during the debate: “The irrational hate of Muslims that leads to discrimination.” Moving on.

We need to protect everyone, not just Muslims: Saskatchewan Conservative MP David Anderson has tabled a motion in response to M-103 that calls for the condemnation of intolerance and discrimination against “Muslims, Jews, Christians, Sikhs, Hindus, and other religious communities.” Leadership candidate Kellie Leitch, who advocated for “anti-Canadian values” screening for immigrants, started a petition to oppose M-103. The website hosting the petition features an image of a young white girl with her mouth taped shut, and the tagline: “No religion should be singled out for special consideration.” Kevin O’Leary, another leadership candidate who does not have a seat in the house, told the National Post that he wouldn’t support the motion because “it is a slap in the face to other religions and to other races.”

There are a few issues with this line of logic, which is essentially “all lives matter” rhetoric directed at Muslims. Black Lives Matter activists have been subject to this “criticism” time and again, and it’s been proven hollow many times over. A gesture of support for a community that  has been under intense scrutiny does not take away from any other issues a minority or majority group in Canada may be facing.

And, as Chong pointed out, Canada has a history of “singling out” groups for recognition in a similar way — Yazidis, Jews, Egyptian Coptic Christians. But there’s an added layer that makes this hypocrisy truly gross: the Conservative government pushed to prioritize refugees who were religious minorities in Muslim-majority countries in 2015. Finally, what “special consideration” are Muslims getting? The point of the motion is for non-Muslims to think about how the current climate has impacted Muslims.

The motion will limit free speech: Leadership candidate Erin O’Toole has said he is concerned about free speech, in particular that it would curb the ability to criticize “radical Islam.” Pierre Lemieux, also in the CPC leadership race, went further, declaring the motion an “attack on free speech” in his fundraising letters. In fact, hate speech is already a crime. Reasonable debate and criticism is not. This motion changes nothing.

M-103 will pave the way for sharia law: This claim was boosted by the right-wing media outlet Rebel, which hosted an “emergency rally” attended by more than 1,000 people on Tuesday night. (Rebel’s Ezra Levant started a campaign under the banner “support free speech, not sharia.”) Four CPC leadership candidates — Leitch, Chris Alexander, Lemieux and Brad Trost — attended the rally. Ambrose and Chong have both made clear they believe the motion is completely unrelated to the prospect of sharia law in Canada — and they’re right. These straw man arguments are deeply painful to hear; they are simply being used to gain favour with the very people who could probably use some education about what Islam is about.

So what’s the takeaway here? For me, there are two particularly alarming things about this backlash. First, there’s the unwillingness to acknowledge that Islamophobia is a problem, in the name of “all religions matter.” Of course all religions matter. And if all religions were treated equally, we wouldn’t need to talk about any of this. But the reality is that Islamophobia has intensified since 9/11 — that’s not an opinion, it is a fact evident in polls, a rise in hate crimes, and a very recent mass murder. The fact that elected officials, many of whom hope to lead the Conservative party presumably because they want to lead the country, appear to deny this is not just scary, but incredibly irresponsible.

On Thursday, Khalid demonstrated exactly why this motion is necessary — she’s been receiving hate mail, including death threats, just for putting this motion forward. “Kill her and be done with it” and “ship her back” were just a few phrases she has been subjected to. On Friday — the holiest day of the week for Muslims — more than a dozen protestors showed up during afternoon prayers at a Toronto mosque shouting anti-Muslim slogans and holding signs that read “Say no to Islam” and “Muslims are terrorists.”  It’s undeniable that Conservative candidates who have made this motion a public spectacle are partially responsible for these events.

The second alarming thing is the underlying reason why something as benign as this motion has created so much controversy. Throwing phrases like “free speech” and “sharia law” around, when they don’t have anything to do with M-103, is an intentional move to stoke irrational fear of Muslims. The arguments put forward by O’Toole and Lemieux literally make no sense, until you realize, as Supriya Dwivedi has pointed out, that 40 percent of self-identified Conservatives voters view Muslims unfavourably, according to a recent Forum poll.

Exploiting this kind of tension to boost political popularity is a morally bankrupt way to pursue party leadership. But unfortunately, it’s working because these tensions exist — and just as they’re dividing the House of Commons right now, they threaten to divide the country.

More:
What it’s actually like to be a Muslim girl in Canada
5 easy dinner recipes to make this week
4 women who ditched the big city for more affordable real estate