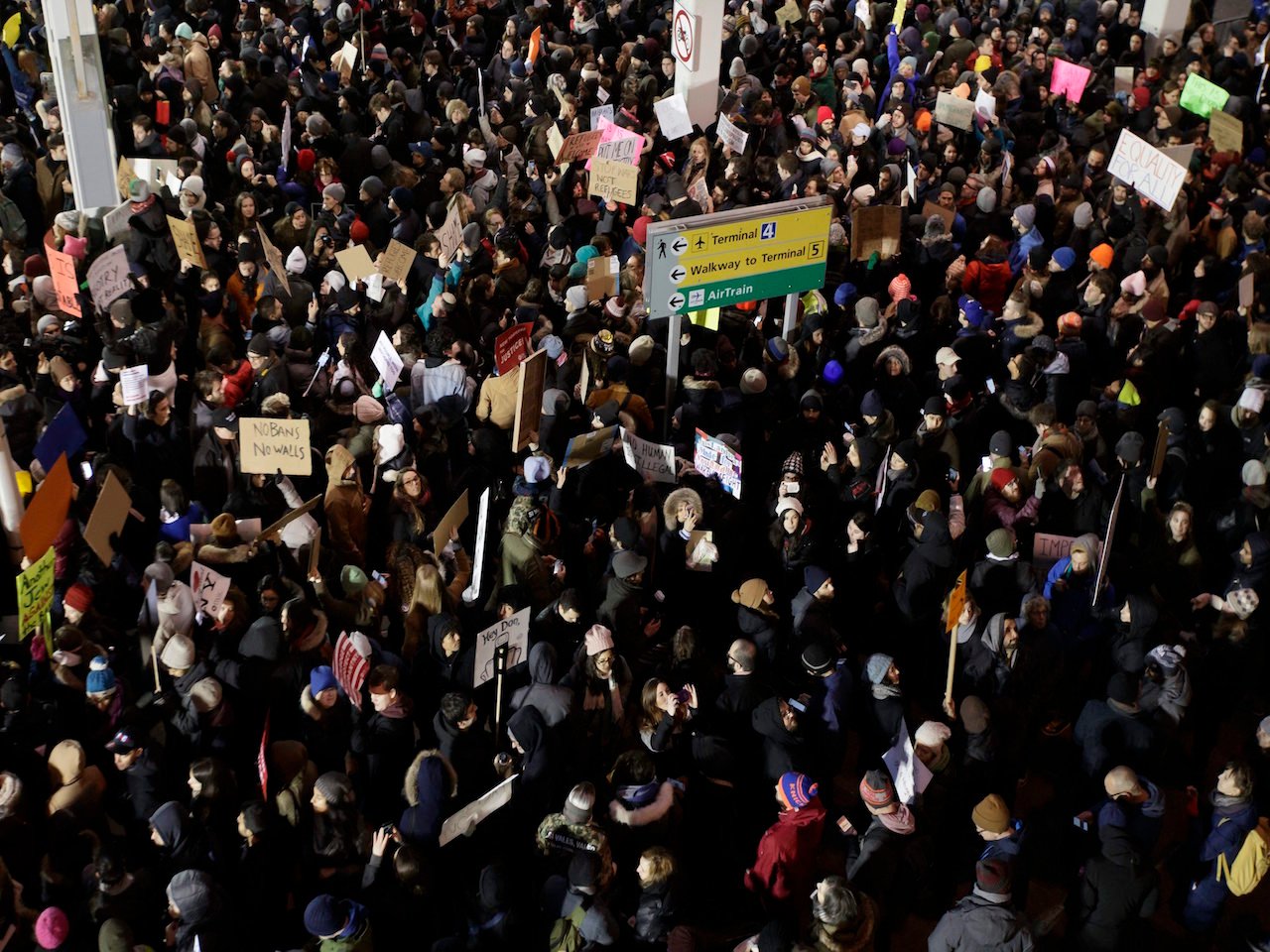 An organizer of last weekend’s Women’s March on Washington called it “an act of resistance” — one of the biggest, it turns out, in U.S. history. After U.S. President Donald Trump’s first week in office, however, it might be just the tip of the iceberg.

After a completely surreal week, Trump signed a sweeping executive order on Friday aimed at stopping “radical Islamic terrorists” that includes a 90-day ban on travel to America from 7 predominantly Muslim countries (Iran, Iraq, Libya, Somalia, Sudan, Syria and Yemen), and a 120-day suspension of the refugee program. Anyone from Syria, including those fleeing the civil war, has been blocked indefinitely.

Chaos erupted at major airports around the country, as some people arriving to the U.S. were detained, and others were banned from boarding their flights. Late Saturday, The New York Times reported that a federal judge blocked part of the edict, and ordered that refugees and others trapped at airports should not be sent back to their home countries. However, the ruling stopped short of letting them into the U.S. On Sunday, the White House backpedalled on part of the order, saying that people who hold green cards will not be blocked from re-entering the country.

Trump’s executive orders have sparked a massive backlash that’s playing out in all kinds of ways (including last night’s Screen Actors Guild Awards, where many winners spoke out against the ban.) Here, some of inspiring acts of resistance, at political and individual levels, and everywhere in between.

1. Prime Minister Justin Trudeau, who has been extremely cautious in his statements regarding Trump so far, took to Twitter over the weekend to declare that Canada would welcome “those fleeing persecution, terror & war … regardless of your faith. Diversity is our strength. #WelcomeToCanada.” It unclear, however, whether Trudeau will denounce the travel ban outright. On Sunday, Immigration, Refugees and Citizenship Minister Ahmed Hussen, who was born in Somalia, said that while temporary residency would be extended to anyone affected by the ban who ends up stranded in Canada, “every country has the right to determine their policies. I can only tell you that we will continue our longstanding tradition of being open to those who seek sanctuary.”

To those fleeing persecution, terror & war, Canadians will welcome you, regardless of your faith. Diversity is our strength #WelcomeToCanada

2. Demonstrators descended on airports across the U.S. to protest the ban, including hundreds who flocked to John F. Kennedy International Airport in New York. Huge crowds also gathered at airports in Seattle, Denver, San Francisco, Los Angeles and Dallas over the weekend, and schedules for other upcoming protests were being shared on social media.

3. Actor and former White House staffer Kal Penn was posting on social media about the refugee ban when someone sent him a message saying he didn’t “belong in this country.” So Penn responded by starting a fundraising page for Syrian refugees in the messenger’s name. The fund had raised $400,000+ by Sunday evening.

To the dude who said I don't belong in America, I started a fundraising page for Syrian Refugees in your name. https://t.co/NOR5P48fBi pic.twitter.com/jtJOsK9GrU

Depressed about Donald Trump’s victory? Don’t feel hopeless. Do something

4. People also opened their wallets in support of the The American Civil Liberties Union (ACLU), which led the challenge to Trump’s order. Fortune reported that donations this weekend totalled over US$10-million.

5. Boston mayor Marty Walsh vowed to defy Trump’s executive order in a moving speech during which he offered up city hall as a safe space for people who now felt threatened.

6. Everyone got in on the subtweeting game. A 2011 tweet from @TrumpHotels asking people to share their favourite travel memory was resurfaced and used to protest the ban. Among the responses: “@TrumpHotels My asylum grant. Thanks for asking” and “My mother’s story of fleeing Nazi Germany by train for Brussels where shelved in hiding until she could escape to US as refugee.” After the airport protests erupted on Saturday, the @SFBART, the social media account for San Fransisco’s transit system, tweeted that “direct service to SFO is running great right now.” And it even appeared as if the U.S. Department of Defense might have gotten in on the action. On Friday, the Washington Post reported that the Defense Department’s official Twitter account posted a positive story about U.S. Marine Cpl. Ali J. Mohammed, who is a refugee from Iraq. “From refugee to #Marine” the tweet said. It didn’t take long for one commenter to post, “Is the DoD sub-tweeting @realdonaldtrump?” A Pentagon spokesman has called the notion “ridiculous.”

From refugee to #Marine. @USMC Cpl Ali J. Mohammed takes the fight to the doorstep of those who cast his family out.https://t.co/oSXWGrzsL7 pic.twitter.com/UVlWsaESic

7. Earlier this week, Dutch international development minister Lilianne Ploumen announced plans to set up an international safe abortion fund to make up for the US$600 million gap caused by Trump’s reinstatement of the “global gag rule.” (The rule denies federal funding to any non-government organizations that provide abortion services or education.) On Friday, Canada’s international development minister, Marie-Claude Bibeau, told The Globe and Mail that Canada is considering donating to the fund.

More:
The 15 coolest libraries in Canada
5 easy dinner recipes to make this week
When mom becomes dad: Life as a transgender parent