Our May cover girl Diana Krall 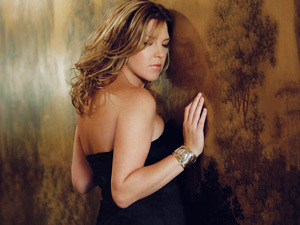 Two-and-a-half years since giving birth to twin sons Frank Harlan James and Dexter Henry Lorcan, Diana Krall feels more in love (with her husband, British musical icon Elvis Costello), more settled than ever (in Vancouver, closer to her Nanaimo, B.C., roots) and more secure in her own skin than ever before. The confidence shows: At 44, Krall’s new, sexy record, Quiet Nights, full of bossa nova and ballads, projects the voice of a woman who has seen the world, knows what she wants and is unafraid to seduce it. What’s next for Krall? Something a bit more G-rated.

Maryam: Quiet Nights is the second record you have made since 2004’s The Girl in the Other Room [Krall’s collaboration on original material with her husband, which reflected her life after her mother Adella’s death from cancer in 2002]. I’m curious: If you were to repeat a collaboration now that you’re parents, what would happen?

Diana: We might repeat it doing a children’s record. I think that’s what’s in my head. If we collaborate again, though, it will be very different. The Girl in the Other Room was very important for me. At the time I made it, I wasn’t able to sing certain songs because I felt so devastated [from my mother’s death]. And now I’m not singing songs from The Other Room because I’m at a different place in my life. When you do a recording, you do it and you’re in it and when you’re finished and you look back, a big mirror is being held in front of you. Looking at what our kids are like now, well, Frank woke up this morning and he’s lying next to me – because we all, at some point, end up in the same bed – and he sings “The ants go marching one by one…” And I wonder, Frank, what were you dreaming about? A Bug’s Life? The boys run around singing all the time. They love the song “Hit that Jive, Jack.” So I think that if we collaborate, Elvis and I, we should do just a great kids record. It would be a riot.

M: You’ve also recently worked with Barbra Streisand. [Krall is producing Streisand’s new album, due later this year. The relationship between the two women formed in 2006, when Krall was pregnant and Streisand “came to some of my gigs and mentioned that she needed inspiration for her tour,” says Krall. “So I started sending her CDs.”] What can we expect from the final result?

D: It’s a really beautiful record. We’ve chosen different songs for her, a combination of standards and bossa nova, plus some very challenging adult songs and she’s really passionate about them. She worked so hard. We wanted to find songs that were art-meets-commercial, that mean something to her, that tell a story about a woman who is her age, and I think that was accomplished. It’s been quite an extraordinary thing to be part of, and I’m learning a lot.

M: Do you sing with her on this?

M: Back on the homefront: Did Elvis have to adjust to living Vancouver? I imagine he loves it, right?

D: We love it here, we love Vancouver. He’s down at Ocean Park with the boys right now. We feel like part of the community. We have our neighbourhood and our friends. Elvis and I will go to this beautiful restaurant called La Regalade, a French bistro in West Vancouver. We just kind of settle into our place, where the owners know us, sit down with candles and we talk. You know, at this stage in life, it’s so easy to just get immersed in motherhood. It’s so easy to neglect your marriage in this scenario. We really make time with each other and nobody else. And when we get home, since the boys are going to sleep later, we see them off to bed and we watch a movie. And there’s your day.

M: And I imagine it takes a lot of planning.

D: There’s no planning really! In the end we work spontaneously. It’s more of a “Can you take the boys to the park?” Yes. “Okay I’ll do this.”

M: You first took the boys on tour when they were six months old, and I read that you borrowed buses, equipped with cribs, from the Dixie Chicks. You’re off touring again for Quiet Nights soon.

D: And now the boys are walking and going every which way. They’re so interactive now. The next bus for the two-and-a-half-year-olds will have bunks. I’d like to sleep near them, too, so they can crawl into bed with me… . When we’re on the road we stay in hotels. We really spend most of our lives in one-bedroom apartments with room service. And we have to find things to do, to live in a new city and try to find a park and a playground and activities for the boys. It’s challenging. That’s where you have to really rely on your own resources and in my case, the help of really wonderful nannies. Nothing is really consistent!

M: As a mom, you say you learned a lesson in the past year of letting go and not feeling having to do everything, to multitask everything. I find that an ongoing challenge.

D: You know you can do it all, but you don’t always have to – and that’s okay. Sometimes I have dinner parties and sometimes I cook the whole dinner and that’s great. There are other times where, because I’m privileged to be able to ask for help, I have more time and more energy to give to my children. I think fatigue is your biggest challenge as a parent. You’re constantly tired and you’re constantly trying to keep up with things that seem simple. Your coping mechanism starts short-circuiting. The advice to keep in mind is just to sleep. Sometimes I don’t get off stage until one in the morning and then my kids are up at seven. I have to get up! Somehow, you have to find a way to balance that.