Ms. Chatelaine: The British Columbia native has opened for Tony Bennett and this fall will be the Canadian Opera Company's production of Die Fledermaus 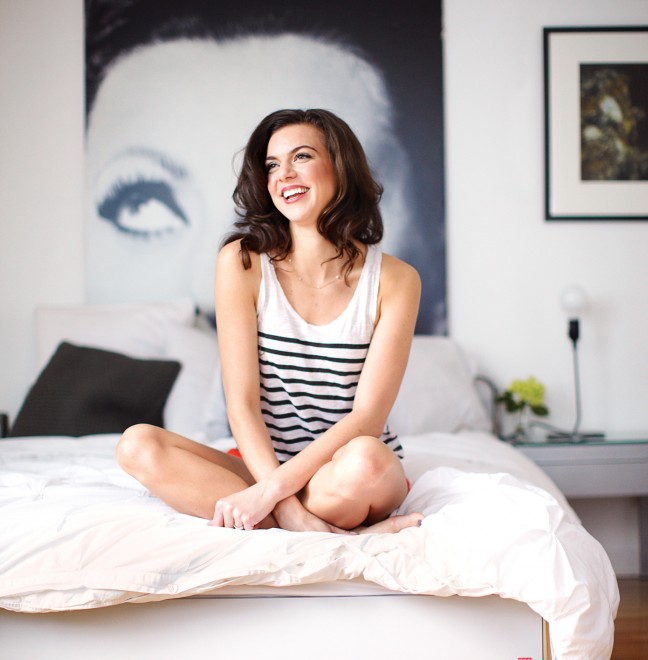 “No one ever guesses I’m an opera singer,” says Ambur Braid. Her tall, lean frame hardly seems capable of belting out a voice that can be heard over an 80-person orchestra. “It feels like my rib cage is growing every year,” she says. “And I have a really big head—which is a compliment in the opera world.”

Born Amber in Terrace, B.C., she knew she was destined for the spotlight when she visited London with her parents in grade 3. “We saw Sarah Brightman in The Phantom of the Opera,” Ambur says. “And that was that.” A year later she changed the spelling of her name to make it more stage-friendly.

Voice lessons and choirs followed, but a CD of Maria Callas’ areas sealed the deal: “The languages, the drama, the emotion—it was all so fun to sing,” she says. Opera also eliminated what she dreaded most about performing, after a technical hitch as a child: microphones. “They terrify me,” she says. “I figured I’d better learn how to sing loud enough without one.”

That sort of power takes time to achieve. “I’ve gone to school longer than a lawyer. There’s the history, the theory, the technical side….” Ambur’s not complaining, though—she knows that opera singers are developed, not born. “I have good vocal cords—two good pieces of gristle,” she says. “That’s the 10 percent talent that you need. The rest of it is drive, timing, a willingness to train 10 hours a day. It’s a struggle. I missed my best friend’s wedding and I haven’t been home for Christmas in six years.”

But her persistence has paid off. This fall she will be appearing as Adele, the wacky maid in disguise, in the Canadian Opera Company’s production of Die Fledermaus. And she’s already opened for crooner Tony Bennett and performed with indie rockers Broken Social Scene.

Off stage, she met her husband, Kwame, at a bar six years ago. (“He looked like Warwick from CSI.”) Their loft on Toronto’s King Street West is a serene, art-filled haven. “I listen to music all day, so when I get home I crave silence,” she says.

Her wardrobe is also filled with contrast. Extravagant gowns she performs in hang beside pared-down weekend wear. “I’m always in white skinny jeans, a blazer and an Etro scarf,” she says. And she admits to an “obsession” with well-cut tuxedo shirts and her Gucci tote, which is big enough to hold her musical scores.

Ambur takes great care of her instrument. “I avoid loud restaurants—speaking over people kills my voice. And red wine makes my cords swell.” But there are some perks: The demanding schedule means she can eat enormous amounts of carbs for energy, so she’s often knocking back agnolotti and pizza at Terroni, an Italian place in her neighbourhood. And last summer, for some respite and to gain weight after a grueling season, she headed to Italy for five weeks to learn how to make pasta herself. “I want to have a long career,” she says. “If you take care of yourself and your voice, there’s no reason you can’t still be singing beautifully at 80.”

My proudest moment… has yet to come.

I define downtime as… cleaning my house. It calms me.

I wish I had more time for… family.

I wish I was better at… being patient with myself.

I wake up in the night thinking about… the next day. I have a lot of anxiety dreams about forgetting my lines.

Oribe Styling Cream: “Finally, a product that lets me wear my hair curly.”

Laura Mercier Lip Stain in Sugar Violet: “I’m a germaphobe, so I buy a new one every couple of months.”

Red algae pills: “I get them in New York and I give them to anyone who thinks their getting sick.”

Morels: “I love cooking with them. They’re the Bentley of mushrooms.”

Formula One: “The cars are amazing. The events are so well executed. And it’s damn sexy.”