The pair talks about putting down their beers, returning to competition and Canada's chances in Pyeongchang. 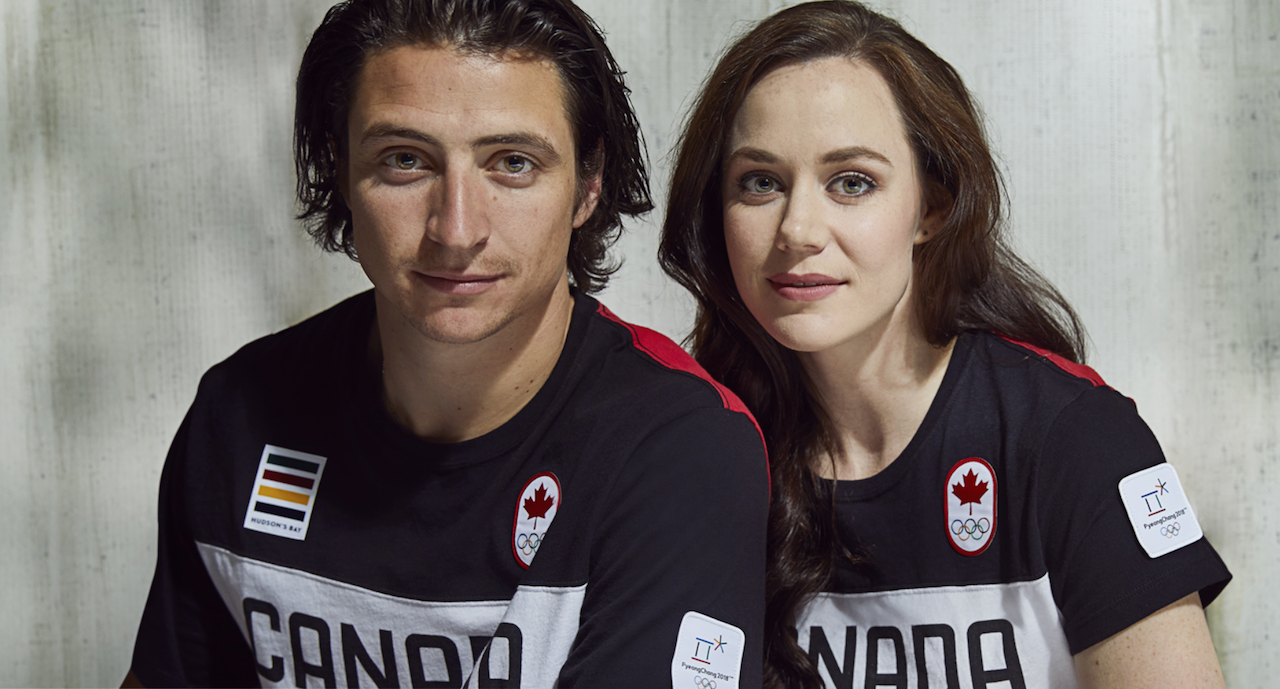 Ice dancers Tessa Virtue and Scott Moir are Canada’s flag bearers at the upcoming Olympics in Pyeongchang. Sportsnet recently caught up with the duo, who thought they were calling it a career after winning silver in Sochi four years ago. Virtue, 28, and Moir, 30, talk about their change of heart, the comeback, and Canada’s chances in South Korea.

SPORTSNET: You’re back.
MOIR: We’re back.

That was the expectation, maybe?
M: [Laughs.]

Really? You weren’t planning to compete in Pyeongchang? Not even in the back of your minds?
V: No, I think in Sochi we truly believed that was it — and we were comfortable with that. We were happy with our performances; we were content with our experience.

V: We thought… [Both start laughing.]

V: We thought that we felt good about wrapping up our careers there. It didn’t take long for us to figure out we missed having that purpose, that we missed having a goal to be striving towards. And also, just imagining the 2018 Olympics and not being there was a struggle. It didn’t feel right.

The idea of watching and not skating.
M: Yeah. Not marching in the opening ceremony, not being a part of this really great and close Canadian team — it really is a family. We couldn’t imagine not being a family.

There was a lot of talk that you should’ve won gold in Sochi, that you got ripped off. Did that have anything to do with your decision to come back?
M: You know what’s funny? Not really.

Seriously?
V: Our coaches asked us [the same question] when we wanted to come back. They were, I think, worried that there was some bitterness or resentment, and there really, truly is not.

M: I don’t think revenge is enough to fuel the fire it takes to go to an Olympic Games and be successful. What we want out of these Games is very different than in both of our previous Games. We talk about how special our Sochi Olympics were — it’s really honest and it’s true. In many ways those Games mean a lot more to us than the Vancouver ones did. The colour of the medal is one thing but we’re super proud of our performances. And that silver for us is something that we’re extremely proud of in our careers. I don’t feel like there’s any bitterness, or we want to come back to get that gold back. It’s more just like, there’s another chance at gold and we want to be there, and we’re going to go and give our all again.

V: It’s more about seeing what we’re capable of. That’s what’s driving us at this point: seeing where we can take our skating and how we can approach things differently. 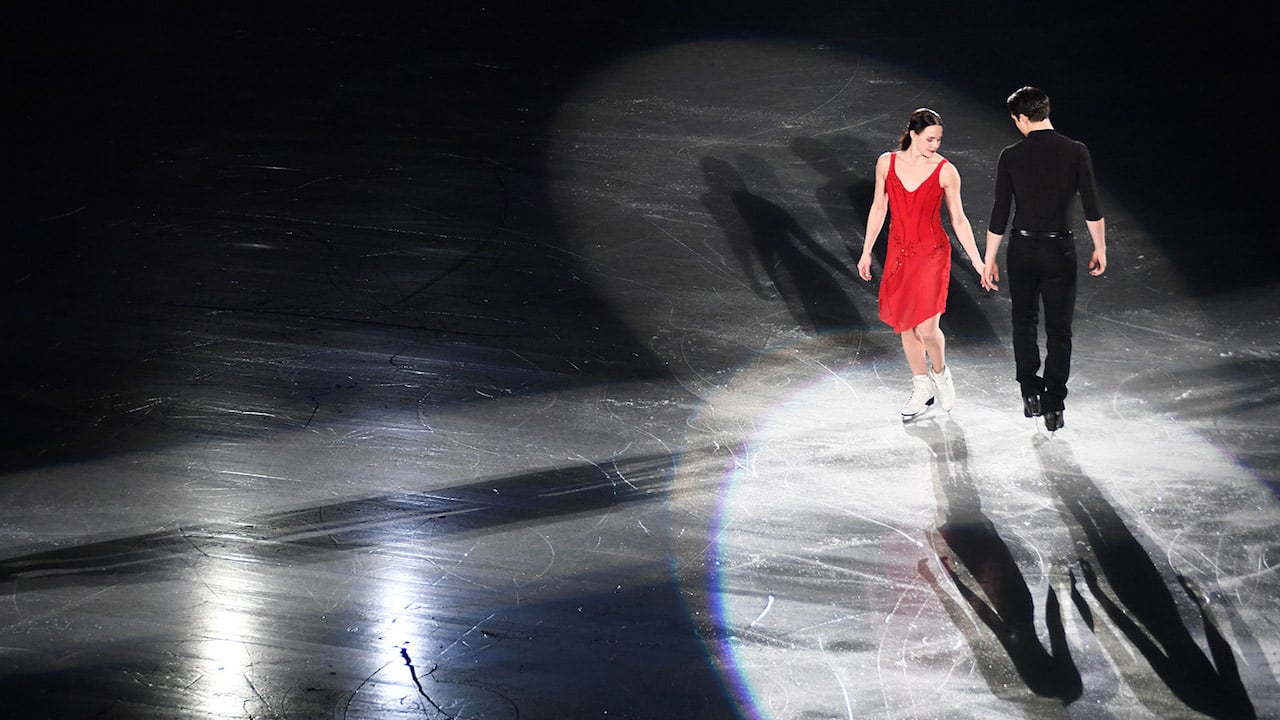 Once you decided you were going to come back, did you celebrate?
M: No it was like, ‘Oh shit, we have a lot of work to do.’ It was exciting and daunting at the same time.

M: We were quite nervous to make a comeback and we knew that ice dancing was taking a couple steps forward. We were excited by the challenge and it was also a little bit terrifying. I think we really felt that pressure, especially last fall when we first came back and started competing again. We wanted to prove to everybody that we weren’t the same old Tessa and Scott, trying to do the same tricks again. We wanted to be different. That challenge is what we really came back for.

How has your skating style changed since Sochi?
M: We spent a lot of time trying to rework some technical things on the ice. Our passion still shows through in a similar way, I think. We’re trying to push ourselves and grow. We knew the athletes we were in 2010 and the athletes that we were in 2014 are just not good enough anymore.

Since the last Games, you moved to Montreal to train with a new coach.
M: Yes. It’s working out great. We love our team in Montreal. Patrice [Lauzon] and Marie-France [Dubreuil] were a team we looked up to when we were growing up, and we developed this friendship, and now they’re in kind of this mentor-coaching role, which is so motivating. What we have off the ice in Montreal is our B2ten team, and I think that’s our biggest advantage. [B2ten is an organization that supports many of Canada’s top amateur athletes through donations from the private sector]. They take care of all of our off-ice needs. We have an off-ice mental coach, we have a trainer, we have an osteopath, and they all talk to each other and that is such a big tool for us.

You two have been skating together for…
M: 40 years!

V: When we were really young, one of first coaches did a lot of work with us to build the foundation of our partnership. And now we can reflect on that time and we’re so grateful for that because we really built our partnership on a lot of respect and trust. We’re still working on it, we still do a lot of work to improve our communication, our efficiency together, to understand one another’s different preferences. It’s evolved over the course of two decades, for sure. Having spent so much time together, we realize it’s a unique dynamic but we’re so appreciative of what we have. It’s a special partnership. We still really enjoy skating together and I think that’s why we still are.

A lot of people think you’re married.
M: Yeah. Maybe that means we’re doing our job? We’re always telling stories, we’re supposed to be reacting, a man and woman on the ice, it’s romantic. What we have is such a cool relationship. It’s more about a friendship, our working relationship is so strong. We take so much pride in that.

V: It comes with the territory and that’s part of the storytelling we do on the ice. If that’s the by-product of having a great longstanding partnership, then we can deal with it.

When you first met, how quickly did the on-ice chemistry develop?
V: I mean, I was seven, so probably not that quick.

M: Yeah, took about 10 years. It’s funny to look back — Tessa was seven and I was nine. I remember there wasn’t a lot of talking at the beginning. We were terrified to hold hands for quite a while.

V: I’m not sure that anyone saw any potential in us really, they just thought it was cute that we were the same height.

M: I think they were laughing at us more than anything.

V: We couldn’t see over the boards and we’d do our little dances.

M: It was more entertaining for them than it was for us. And then eventually we fell in love with the sport and skating with each other and that grew. It was very organic. It wasn’t a lightning in a bottle situation. Boom, they’re great! Not quite. We were pretty bad. 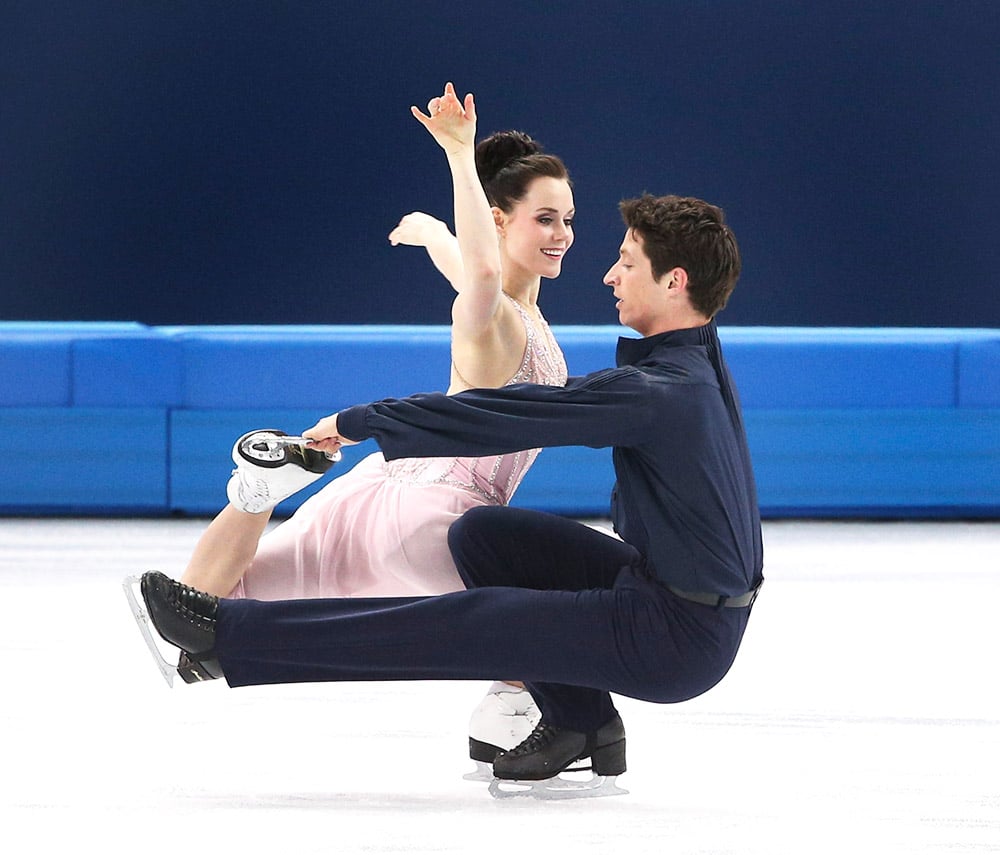 When did you realize you were good?
V: It was about a month before the Vancouver Games when I thought, “Oh we could do this! We could really do this.” I was a little late to the party. 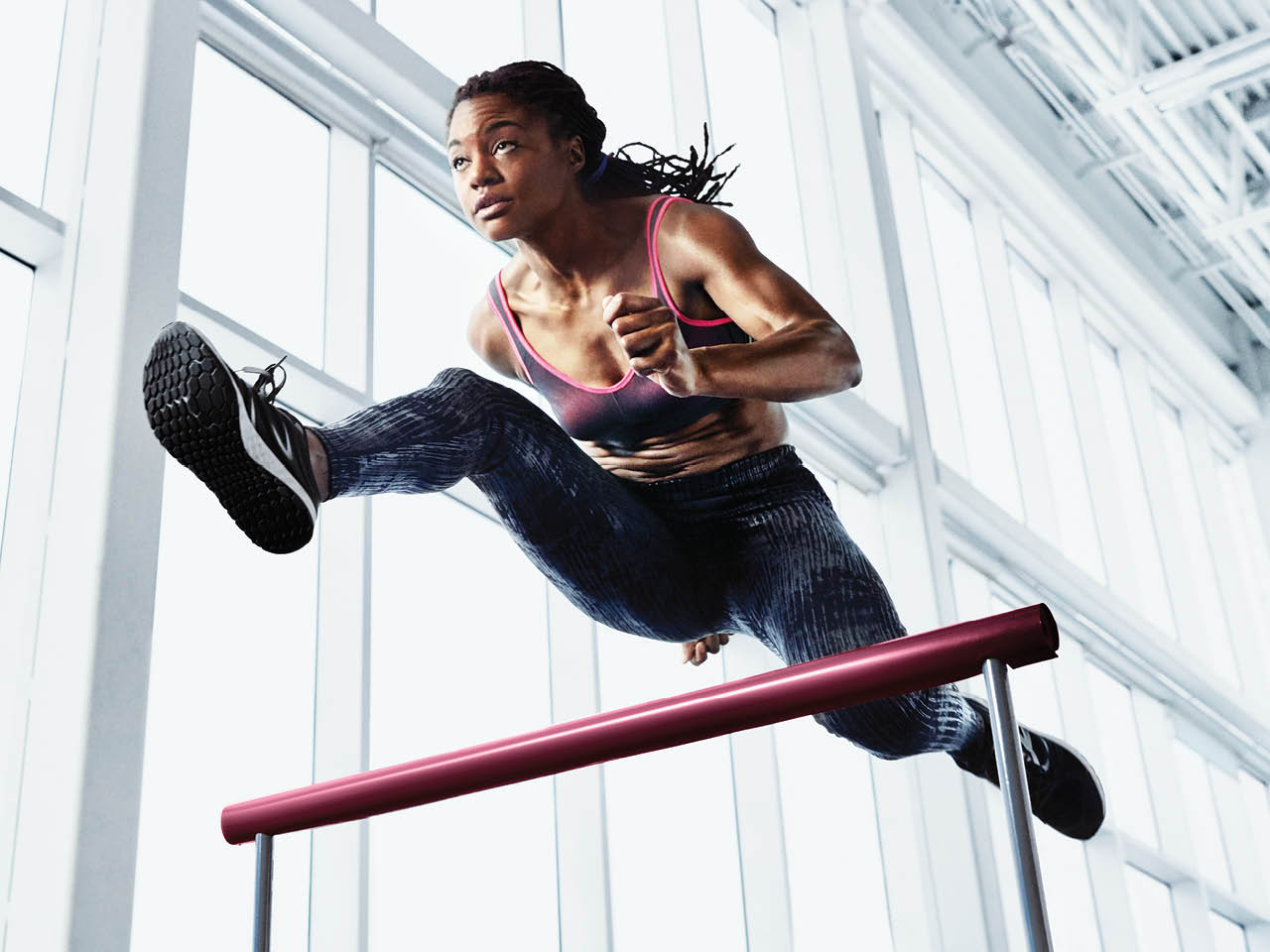 V: We moved away from home when I was 13 and Scott was 15, so obviously that was to pursue something. And we thought maybe we wanted to strive for more.

Scott, let’s hear your scouting report on Tessa.
M: Top of the list would have a little star and it would say, “Brilliant.” She’s creative, from the beginning of time. She can move like nobody I’ve ever seen. She’s very, very selfless; she’s a people pleaser. But my favourite things I think have really just gotten even better in the last couple of years and that’s her drive, that’s her commitment to being an athlete. I mean, this is gonna be a long scouting report, we’re going to have to type through a lot of pages.

M: I’m motivated every single day to go to the rink because of what she brings. I know that she brings her best every day. With brilliant people, with being so creative, it’s hard to imagine you’d just be so steady. That last thing, that’s the consistency.

That’s a tough act to follow. Tessa, let’s hear your report on Scott.
V: It is a tough act to follow, for sure. As I’m hearing him talk through some of the things I’m realizing why our partnership works, because we both think the world of one another. Scott is the most disciplined, driven athlete I’ve ever met. There’s a fierce competitor deep within and the passion and the raw talent that is there — the ability to move and hear music and interpret it — is unlike anyone else I’ve ever seen on the ice. And I think because he wears his heart on his sleeve people feel so drawn in and captivated by his performances. He’s generous, thoughtful and extremely insightful. He’s able to understand the glide of the blade differently. 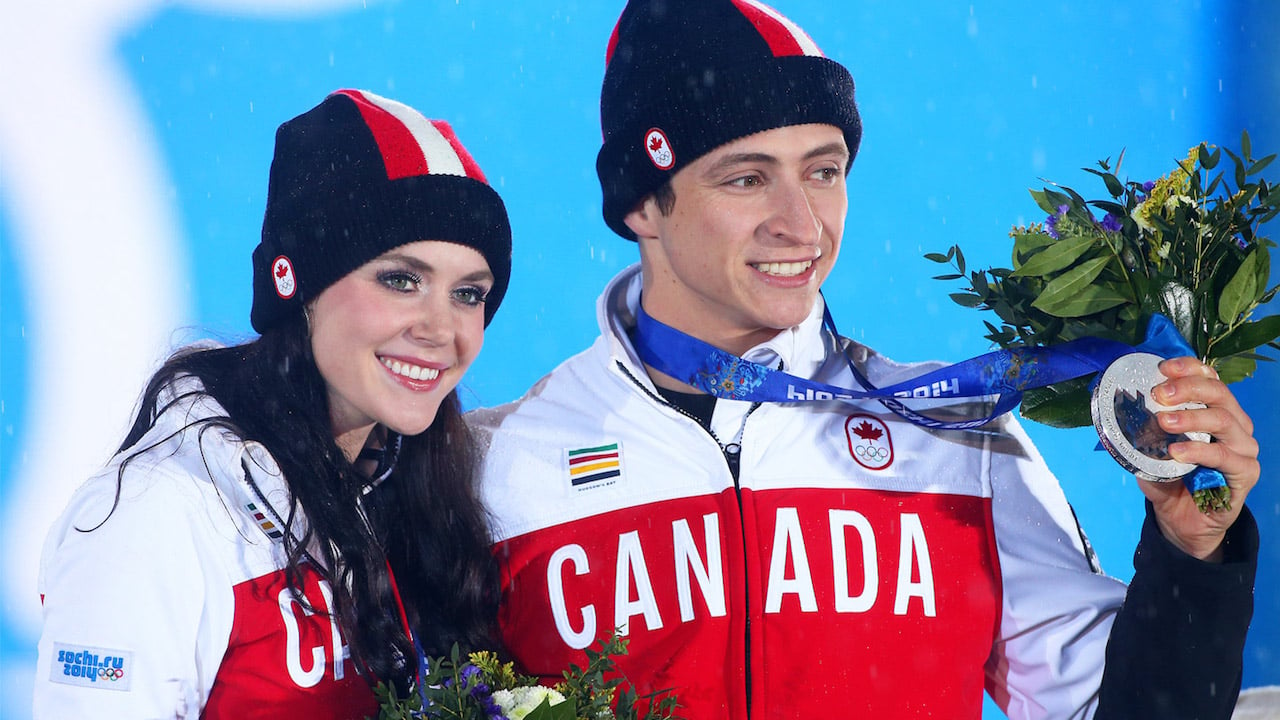 Those were really good. You two have managed to really capture this country’s imagination. How have you done that?
M: That’s a big compliment.

V: But we know that as soon as our competition is done there’s another Canadian taking their place at the starting line or waiting to race. I think that’s what’s so powerful is that we’re just part of something bigger than us.

And this is a strong Canadian team.
M: Very strong.

Who are some of teammates you’re excited about?
M: In figure skating, especially?

You can talk about luge if you want…
M: I’m going to know a bit more about figure skating. [Laughs.] It’s so much fun for us to be kind of veterans on this team because the talent, especially the young talent, is so promising. We’ve seen a lot of these young skaters kind of grow up and mature and we’re just so proud of them. Especially with what’s happening in women’s skating with Kaetlyn [Osmond] and Gabby [Daleman] and Alaine [Chartrand].

M: I’m getting goosebumps to know what they did [in 2017] and how special [2018] is going to be for them. I think that’s one of the coolest stories about our team and I can’t wait to see — I think we’ve only scratched the surface of what these young ladies are capable of. I really can’t wait to see what happens in 2018.

How about for you two: Will this be your last Olympics?
M: I’d say there’s a pretty good chance that this is the end.

M: [Laughs.] It’s done, it’s over. No, that’s a decision that we’ll make after the Olympics. That’s one thing that our experience has taught us is that you don’t really know, and it’s a feeling. Right now, we’re just excited and focused on this experience ahead. Being so fortunate to have another opportunity, we just can’t wait.