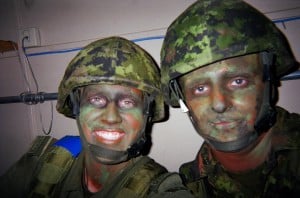 The question I most often get asked by civilian people is: “Is basic training just like the movies?” In short, yes it is. Then again, no it’s not. You don’t get abused physically like they show in the movies. But you polish a LOT of boots and get yelled at…A LOT!

I’ve mentioned in a previous post that basic training really bonds you with your other platoon members because it is the only way to be successful. You have to learn to lean on and trust those around you because the same is said for war. Without trust, you just don’t make it. So the indoctrination of the environment is vital. As officers, our basic training is divided into two separate summers (as most of us are in university so we have to complete it in the summer).

The course is a total of 15 weeks long and is held in St. Jean, Quebec. Fifteen weeks of the same people, day in and day out. As part of the indoctrination, for the first four weeks, you aren’t even allowed to leave the floor that you live on unless you have class, a duty to perform, or physical training. It is quite literally enough to make you feel crazy and emotions throughout the platoon run high. To make it even better, you are limited to about 6 hours of sleep a night, which to be honest, is enough to make you bonkers in a very short period of time, especially considering you’re busy the entire time and desperate for sleep. Meals last only 30 min…most of that time spent waiting in line to be served…so often you end up eating as you walk to stand in line to put your tray away.

I arrived in training at about 148 pounds (healthy for me) and left there at 121 and I looked like a skeleton. Most of all, yes, you are yelled at CONSTANTLY. I was yelled at for having a loose thread on my uniform. I was yelled at for not having perfect hospital corners on my bed (the corners are measured with a ruler….seriously). I was yelled at for being too girly, for having nail polish on my toes, and for not doing enough push ups. Hell, I was even “written up” for having a few strands of hair falling out of my bun. Yes, forgetting my hairspray that day was apparently worth a red piece of paper to announce how naughty I was.

The 15 weeks of basic training are spent learning the basic components of the military such as rank structure, the nature of military life, knot tying, map reading, rifle shooting, how to give orders, nuclear biological chemical warfare, and basic military writing and administration. To say the very least, some classes are by far more interesting than others. Above is a photo of a friend and I during our camouflage painting lesson, which I was late walking into because I had been at the hospital acquiring pain meds! Ha. So to say the very least, I didn’t do a very good job…it looks like I used the brown paint as lipstick! Ha. I’m the one on the left.

And when you aren’t in class, they have you doing something physical. Often, we had to do pushups everytime before we entered a room. By the end of the day, you’ve done hundreds. We ran several times a week, did circuit training, and the god awful ruck march. This entails loading about 75 pounds onto your back in a ruck sack (as well as your rifle and wearing a helmet that starts to feel like it weighs 20 pounds) and marching 13 Km in less than 2 hours, 18 minutes. It is quite possibly the most horrendous thing ever. What is even more fantastic is when you have some 200 pound guy talking about how easy it is. I’m sure it’s easy to carry 75 pounds when you weight 200, but let me tell you, when you’re only 120 pounds or so, it is NOT so easy. And I wasn’t one of the tiniest women there!

I was admittedly not a person who coped well in basic training. Some people thrive and find their niche within the military there whereas others crumble and find themselves miserable. I was the latter. I was only 18 and it was my first time away from home. I was in another province from my parents and friends and boyfriend and was spending the summers sleeping on the ground in the field, wearing my 75 pound ruck. Despite being fit and healthy, I hate (and am horrible at) running and so every step of those 10 Km runs were painful for me. And I like to sleep. Preferably longer than 6 hours a day.

To be honest, basic training had me close to quitting the forces, but since I had never quit anything before, I just kept plugging along, going day by day, reminding myself that surviving this would mean I would get my education paid for and I would have a job right out of university…a great job no less. My greatest reminder came on one particular ruck march on 6 June, 2004. We were marching in remembrance of D-Day but I allowed myself to get carried away with how hot, tired, sore, and miserable I was. I proceeded to whine about it only to have my Sergeant come right up to my face and say, “Do you think the guys on Juno beach were tired, Thompson? Don’t you think they wanted to stop!?!? What do you think would have happened if they had?” His face was purple and I believe steam might have been coming out of his nose and ears but he was right. I was so lucky to be here, having this opportunity. To say the very least, I shut up. I’ll give more thrilling basic training details in my next post, as this one is nearly as long as that march felt.