Sarah Boesveld makes an argument for why setting goals in January isn't always effective while Carley Fortune shares why she thinks it's the perfect time. 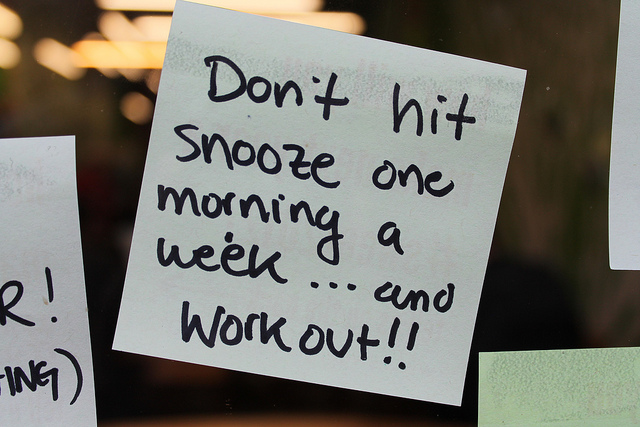 Here’s why you don’t need resolutions (just yet)

Congratulations — you’ve survived the holidays! The wrapping paper is cleared, the guests have all gone home and you’re cozied up with that new book you now have 10 minutes of peace to read. Naturally, your mind floats to the month ahead, to all the ways you’ll be your Best Self or Thinner Self or More Productive Self in 2016. That to-do list forming in your brain — known traditionally as New Year’s resolutions — gets longer and longer the more you think about it. After all, that spare tire won’t deflate itself.

Let me just add one more thought to your wandering mind — why do all of this now? Why does the flip of the calendar necessitate a complete reboot of your life? Why do you have to begin the ritual of self-improvement in January when it’s too cold to go running outside, too dead-of-winter to access fresh vegetables and too dark to feel invigorated?

Related: Stop exercising to be smaller. Get stronger instead

It’s a lot of pressure you don’t need, especially when your best efforts are all but doomed to fail. A 2015 study from the University of Scranton found that only 8 percent of Americans kept their New Year’s Resolutions. A single digit number, folks. The same study found more than 45 percent of Americans usually make New Year’s Resolutions, and 49 percent report “infrequent” success at keeping their resolutions.

I’m not saying self-improvement is a pointless pursuit — quite the opposite. I want you to succeed at being your best self! Of course I do! Life is about growing and learning and finding happiness and peace (that kind of peace you’re feeling as you finally get to read that book, only better).

Instead, let’s call New Year’s resolutions exactly what they are — a form of “cultural procrastination,” a term coined by Carleton University psychology professor Timothy Pychyl. It’s easy to find motivation when everyone else is making resolutions too. The problem is you’re probably not ready to break your habits and create new ones, he says.

Related: 4 (relatively) painless ways to tackle your finances in 2016

And guess what? You might get that boost of achievement if you do lose a little weight (but it’s probably more likely to happen in May when you can more easily hit the trails) and get your finances in order (which might be difficult when you’re carrying extra credit card debt from Christmas). But will your entire life instantly improve as a result? Probably not.

So I propose a staggered approach to self-improvement — sign up for a 5k in April ahead of race season. Get your finances in order in March around tax time. Before you know it, you’ll be your best self. Because sometimes giving yourself the breathing room to do so can yield some pretty great results.

I’m not someone who’s particular focused on her inner self. I don’t meditate, I don’t keep a journal and I have almost no “me-time.” Between work, family and binge-watching Jane the Virgin, who has a spare moment for personal reflection?

But during the holidays — somewhere amid the cheese plate, the roast dinner and the baked goods — I find myself thinking about what I’ve accomplished in the past 12 months and what I could do better in the next. (I also find myself very, very full.)

Related: Why winter running is an incredible way to get in shape

So every December I write a few New Year’s resolutions down on paper. I know there’s a big chance I won’t keep them — as my colleague Sarah Boesveld points out above, just eight percent of people do. But sticking to resolutions isn’t really the point. The point is setting them in the first place.

There’s value in giving yourself a thorough review when you have the mental bandwidth to do it honestly. In the busyness of everyday life, I’m too hard on myself. I often feel guilty and ineffective — that I haven’t done everything I could to the absolute best of my ability. But during the holidays, I get the pause I need to give myself a truthful once-over: Was I good friend, daughter, partner, employee, karaoke singer? (Answers: OK, decent, pretty good, great, amazing.)

My resolutions are often immeasurable. For example, on my list for 2015 was “complain less.” Whether or not I was less whiney this year, I’m not sure, but I recognize that I’m far happier and more pleasant to be around when I don’t grumble constantly. For 2016, I’ll keep that on my list. I’ll also add a cliché: go to the gym regularly. Years ago, I loved going to spinning classes and I’ve always missed them. I’ve just joined that gym again and I hope to go three times a week. I also hope I’ll be as fit as I was five years ago.

I like imagining myself as a happy-go-lucky, spin-class-taking person, even if I’ll never be totally sunny-sighted or have as much time for the gym as I used to. But that’s half the fun of make resolutions — you get to picture an improved version of yourself, whether that’s someone who is a little buffer, smarter or kinder. If I take a small step closer to getting there in 2016, then great. If not, there’s always next year.