A Musical Tribute To Victims Of Gendered Violence, With Poetry By Atwood

Five years ago, Joshua Hopkins' sister was murdered by her former partner. An opera singer, Hopkins is debuting new songs paying tribute to her, and other women lost to violence. 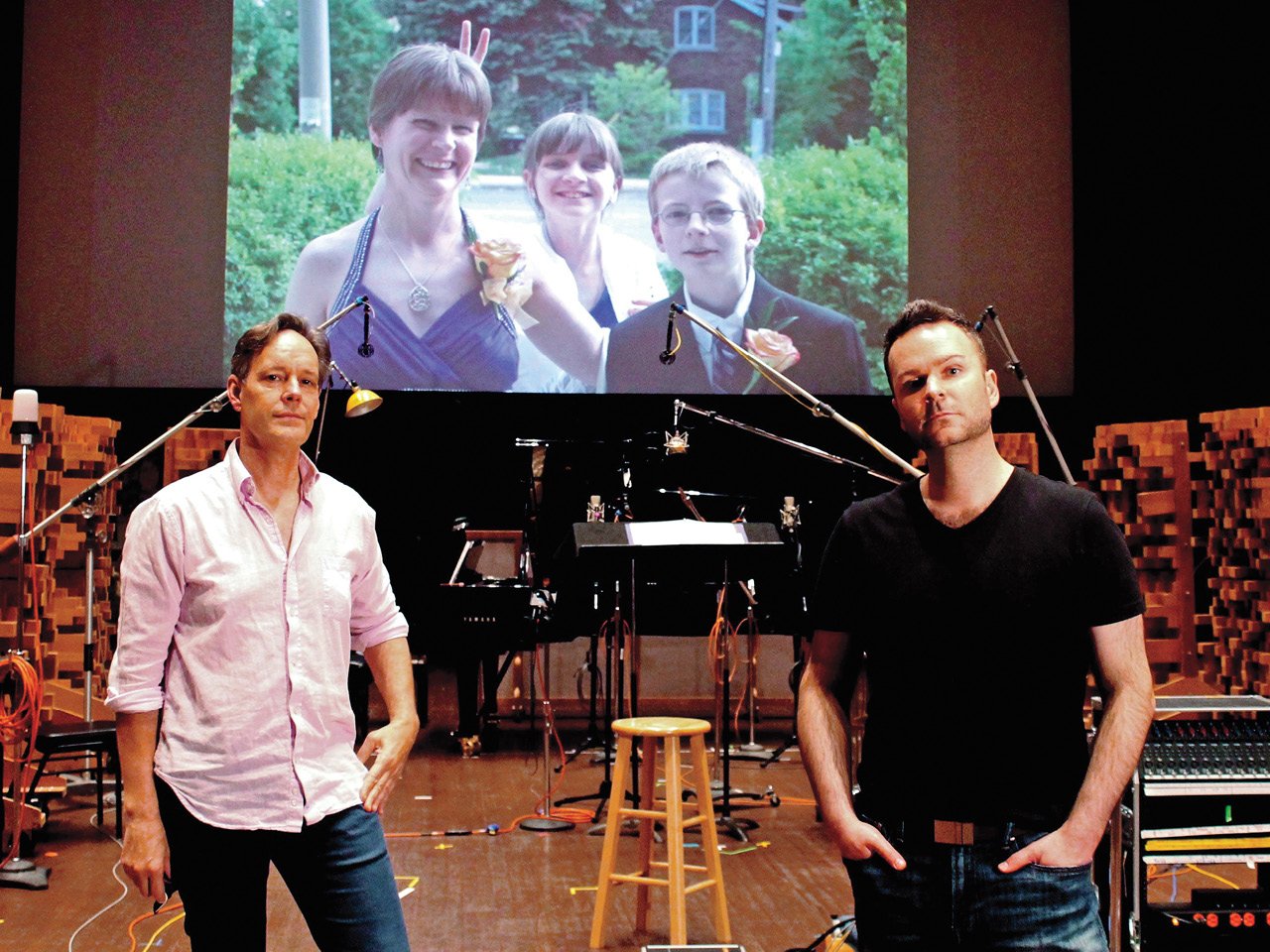 Composer Jake Heggie, left, and Joshua Hopkins, in front of a photo of Hopkins’ sister Nathalie with her children. (Photo: Zoe Tarshis)

Houston-based opera singer Joshua Hopkins happened to be in Ontario, rehearsing for The Barber of Seville, when he got the worst call imaginable. His sister, Nathalie Warmerdam, had been murdered, just an hour west of where he was standing.

“I just felt like the world was spinning and nothing was real anymore,” he says now about September 22, 2015, the day Warmerdam was fatally shot by her former partner, Basil Borutski, who had killed two other women, Anastasia Kuzyk and Carol Culleton, before coming for her. Hopkins is grateful that he was at least able to grieve with his family in Petawawa, Ont. And he still took to the stage at Ottawa’s National Arts Centre just days after his sister died, slipping into character as a means to escape reality. The audience responded with heartfelt applause.

Just ahead of International Women’s Day, Hopkins is raising the curtain again, this time with Songs for Murdered Sisters. Featuring original poems by Margaret Atwood and music by acclaimed American opera composer Jake Heggie, the show walks viewers through the grief cycle—from denial through anger on the way to acceptance—ultimately highlighting that tragedies such as Warmerdam’s death are both pervasive and preventable.

“I felt like I had a voice to really tell my sister’s story,” says Hopkins. The work features just one sad, solo voice, to be sung by a person of any gender, and conveys the profound ways intimate-partner violence impacts entire families and communities, and how easily red flags are overlooked.

In 2017, Borutski was found guilty and sentenced to life in prison. Systemic change, though, is glacial paced. An inquest into the murders is only slated to begin this spring, and Hopkins will be paying close attention in his newfound role as an advocate.

In the meantime, he’s looking to shift mindsets with his art. “I wouldn’t say I’m at the stage where I’m at peace with [her death],” he says. “I still have a long way to go in my grieving. But this project has certainly helped me be more in touch with my emotions. It’s motivated me to be an active participant in speaking out.”

The Houston Grand Opera and Marquee TV will stream a filmed performance of Songs for Murdered Sisters for free from February 19 to April 30, at both houstongrandopera.org and marquee.tv. An audio version will be released on streaming platforms on March 5.