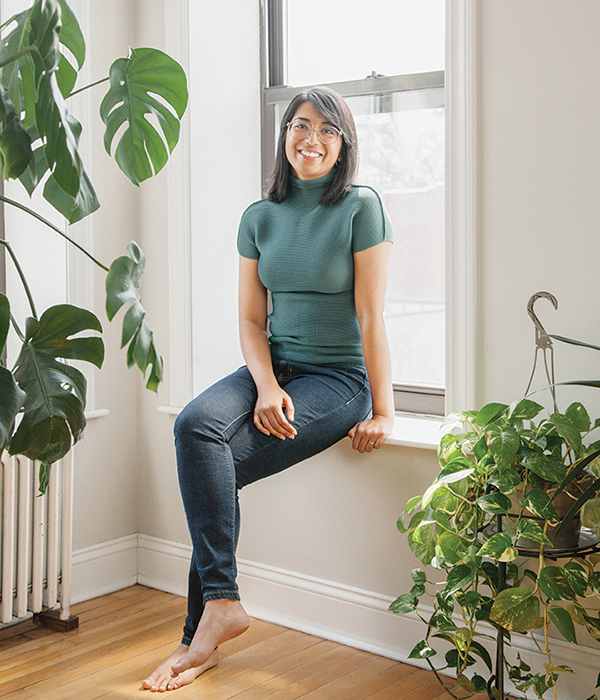 Isha Datar declared herself an environmentalist during a fourth-grade field trip to a city landfill. Growing up in Edmonton, she fretted over the impact of the province’s oil and gas sector and even deferred getting her driver’s licence in favour of riding her bike to school. While completing her undergraduate degree in molecular biology at the University of Alberta, Datar wandered into the campus greenhouse and spotted a poster for a “meat science” class, which explored the environmental consequences of animal consumption. A meat lover, Datar soon found herself in an ethical dilemma: “I learned that riding my bike was useless if I continued to eat animal products,” she says.

Learning about factory farming, antibiotic resistance and the deforestation necessary to raise animals for food  provided an aha moment for Datar. “Other students were writing about aromatherapy for pigs, but I grabbed the topic of cultured meat and ran with it.” Datar is now a leader in cellular agriculture, which involves harvesting animal products from cell and tissue cultures, not animals. These days, she’s the CEO of New Harvest, a New York City–based non-profit focused on funding research to create animal-like products — eggs, milk, leather and, yes, meat — without the animals. “Cells require far less in terms of energy input, compared with a cow that’s artificially inseminated [for milk] or a calf that’s raised for slaughter.”

This month, New Harvest will host the first-ever Experience Cellular Agriculture conference in San Francisco. While living cells have long been used for medical innovations, like insulin (made from pig pancreas), cellular agriculture is an emerging field. Datar believes that some of the edible products New Harvest funds, like horse-free gelatin and cow-free beef, could hit the market within the next 10 to 20 years. And consumers concerned about taste can relax: Datar recently sampled a new 96 percent animal-free skim milk, saying it had the “same sweetness and flavour” as cow’s milk. The only barrier is  cost: The prototype she tasted was US$68 a gallon.

Datar, who lives with her husband, Jered, in Brooklyn, considers herself a “sustainably minded meat eater” — one who occasionally enjoys visiting “hot tables” (big Caribbean buffets) in her neighbourhood. Still, her mission is to make animal-product consumption less wasteful. “I think of factory farming as the coal mining of yesteryear,” she says. “It was very dangerous and dirty, but it worked. If meat eating isn’t stopping any time soon, why not think of alternatives?