A devastating accident in her teens left Jessica Kruger paralyzed. But she didn’t let it prevent her from making her mark in fashion—and on the rugby pitch. 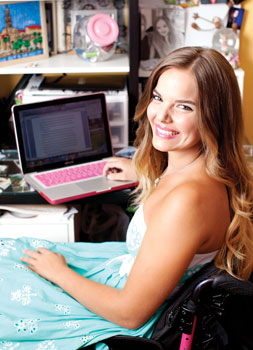 Don’t let the pink lipstick and frilly dresses fool you: Jessica Kruger is one tough chick. Six years ago she broke her neck in a freak accident and learned she would never walk again. Now, at 21, she is the winner of a nationwide competition to become the face of Lise Watier’s new Something Sweet fragrance; she’s the only female member of her wheelchair-rugby team; and she is on her way to becoming a high school teacher.

Her action-packed life is a long way from the accident that changed her world irrevocably. While working a summer job as a house painter in high school, Jessica fainted and fell off a ladder from the second storey of a house. Her neck broke in four places. After surgery, a nurse told Jessica she’d never regain use of her legs. “My dad was so angry he asked her to leave,” she says. “In the beginning we all believed I’d walk again.”

At first she refused to see a therapist. “I didn’t go through the usual steps of grief and anger. I guess I was in denial.” To cope, Jessica surrounded herself with good friends who formed a protective cocoon around her, but her darkest moments came in her final year of high school. Plagued by a series of health problems as a result of her accident, Jessica slipped into depression. “I realized this was going to be my life forever.” 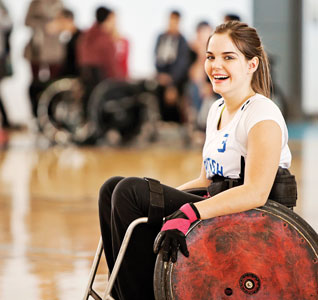 But she fought her way back. “If there is one thing you need to know about me, it’s that I am stubborn to no end!” she says. Jessica is now in her fourth year at Simon Fraser University, studying English literature. “I want to be a high school teacher,” she says.

But that’s not the only goal on her horizon. Jessica has set her sights on joining the Canadian wheelchair-rugby team for the Paralympic Games. She says getting involved with the sport (also known as murderball for its aggressive, full-contact nature) was one of the defining moments of her life. “I played sports before my accident, and I was determined to play them again,” she says. She’s the youngest player and only woman on her coed B.C. provincial team. “Wheelchair rugby has proven to be a lot of things for me. At first it was a challenge — a way to prove to myself that my injury would not stop me from living my life. Now it’s my passion.” 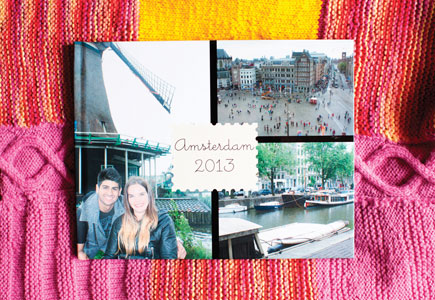 Snaps from her recent trip to Amsterdam with her boyfriend

She also attributes her emotional recovery to her boyfriend, Raj. A friend from middle school, Raj became a confidant after her accident. “I  thought I’d never find a boyfriend,” she says. “Raj was the first person I was totally honest with. He doesn’t see the wheelchair or its complications — he just sees me.”

A tough player in the game, Jessica is actually a self-proclaimed “girlie girl” who always wears her pearl necklace, even on the rugby court. She adores dresses and owns about 50.

It’s perhaps this unbridled femininity that made a friend think of Jessica when she saw an ad this past spring for Lise Watier’s contest seeking a “beauty ambassador” for its new fragrance, Something Sweet. Jessica entered on a lark and was picked, through online voting, as a finalist from among 400 contestants. Then she dazzled the judges. “It was an amazing experience to fly to Montreal and be put up at the W Hotel! It has also become an awesome opportunity to educate the public on women and girls excelling with or without a disability,” says Jessica, who is a spokesperson for the Rick Hansen Foundation and WorkSafe B.C. “People still stare at me, but lately some actually recognize me and come over to congratulate me —that feels great!” 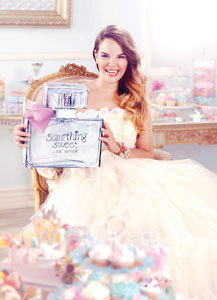 My proudest moment was… when one of my rugby role models, Duncan Campbell, told me I played the best I ever had at the wheelchair rugby nationals earlier this year.

I wish I had more time for… travelling, spending time with family.

I wish I was better at… Skiing. There’s a great adaptive program in Whistler.

What scare me… I’m not afraid to try anything, but I worry about the people I love dying.

My guiltiest pleasure… is the chocolate buffet at the Sutton Place Hotel in Vancouver.

I define downtime as… Watching What Not to Wear — I love that show!

My perfect day would be… to start with my mom’s crepes, then play rugby and not get benched. I’d end the day hanging out at the beach with my boyfriend, Raj, and our friends.

I’d love to go on vacation… to Disneyland with my best friend Lea — I’ve been five times and I’m a fanatic!

Betsey Johnson dresses “I’m addicted. I have seven of them — so bright and fun.”

My dog, Rolly “She’s my baby. She’s a golden retriever, and when we go to the dog park, she’s so excited she can pull me over in my wheelchair.”

Black Milk Clothing “I have five pairs of their patterned nylon leggings that I bought online from Australia.”