Mouse in the house!

Picture this: Me screaming. My six year old screaming. My twenty-something nanny screaming. All over a tiny little mouse that we found when we went to give my daughter a bath. 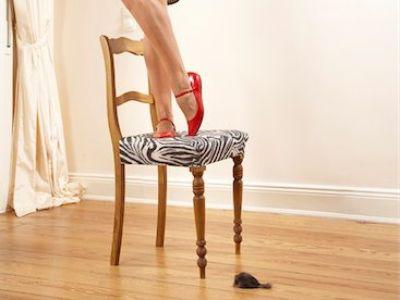 Picture this: Me screaming, my six-year-old screaming and my twenty-something nanny screaming. All over a tiny little mouse that we found when we went to give my daughter a bath. I’m not sure who screamed first, but needless to say, us three females are not good with coming face to face with rodents in real life (In movies, like Flushed Away, we’re fine.)

I probably screamed first, which made my nanny scream, which made my daughter scream. Yes, there was one little mouse in her bathtub and we did what any female faced with a mouse in a bathtub in a bathroom would do. We slammed the door, as if the mouse stuck in the bathtub was a bear trying to kill and eat us. “What do we do? What do we do?” I screamed. My nanny took charge and went back into the bathroom, turned on the water, racing out and slamming the door again. My daughter was like, “I want to see the mouse!” I was like, “How the hell do we get the mouse out?” I ran downstairs and brought up a spatula (don’t ask) and two plastic mixing bowls (don’t ask.) Okay, for some reason I thought we could somehow sweep the mouse into one bowl, cover it with the other bowl, and get it outside. My nanny screamed that we couldn’t use the mixing bowls or the spatula because she cooks with them and I was like, “I’ll buy new ones! Just get it out!” She refused to use the spatula, instead choosing to drown the mouse. I can’t tell you exactly how she got it out, because I was so freaked out. But let’s just say I saw her take a garbage bag outside.

With the mouse gone, I wondered, was there going to be more mice? Did I have an infestation of mice? As a single women, faced with this prospect, the easiest, most painless thing I could think of to do was put up a “For Sale,”sign. Instead I did research. Did you know there’s a website called micetoronto.com? I called and spoke with a very nice man, named Paolo Bossio, a “mice specialist,” (Isn’t that the best job title ever?) He told me the mice would not have come up the drain (as I assumed) and that it probably fell into the bathtub and couldn’t get out. He made me feel better by telling me that “most people would take that approach,” to getting the mouse out, but that he could come by and get them out humanely. (I do feel badly about drowning the mouse.) He also said now is the time for mice and other rodents to appear, thanks to the cold weather. He does about 25 “mice jobs,” a day in Toronto. The rodents are looking for a warm place to stay. I mentioned that that was the only mouse that I’ve seen and have not seen any droppings anywhere, but, unfortunately for me, I’ll probably have to get him in to check. Better safe than sorry. Three screaming gals in one house can’t happen again.

Here’s some advice if you see a mouse in your house!

2. According to Bossio, it’s better to be preemptive. Meaning, it is better to deal with it before you see a second mouse. Also, mice can have four to eight mouse babies every 30 to 40 days. So you have maybe a month before you see another one.

3. Check for droppings behind the stove, fridge, under sinks, where rodents usually hide because they think they can go undetected.

4. Call Paulo. He’ll help. He can be reached at  www.pestservices.ca.

He promises not to scream.