Mom with a badge

For the past few years, I've balanced my work as an investigator on the gang squad of a major Canadian police force with being the mom of two toddlers. I worry for their safety – and I used to carry a gun in my diaper bag – but I wouldn't trade my job for anything 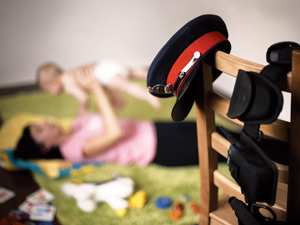 “You’re too pretty to be a cop,” gangsters tell me. Or “You can frisk me any time.” Of course, I just ignore it and continue doing my job. Gangsters can be so smooth, charismatic and chauvinistic. They actually believe that if they flirt and tell you how attractive you are, they’ll distract you. As if. It just gets me more intent on finding out what they don’t want me to know about them. Like where their guns are hidden.

One of the scariest things about this job is finding a gun on a person unexpectedly. You have to confiscate it quickly and be aware that there could be more, hidden in the back of their pants, in their boots and even in their belt buckles. It’s like a game of hide-and-seek, but with dire consequences. In a way, gangsters are like kids. Really dangerous kids, mind you – kids who carry knives and firearms and live by a violent, ever-changing set of principles.

When I entered the gang squad, there was the odd citizen with a gun. Now everybody has one. People who are nobodies have guns. It takes nothing to get one. The proliferation of guns is just one of the things that have changed; there has also been a shift in the very makeup of street gangs. Once, they were ethnically distinct, the Vietnamese with the Vietnamese, Indo-Canadians with Indo-Canadians and so on. It was easier to keep track of their loyalties. Now, they’re more integrated. It’s downright trendy to be a gangster, whether you’re white, black or Asian, all of which means this world has become volatile and unpredictable, a trigger-happy multicultural gang society quick to join together to make an illicit profit but just as quick to turn on each other and anybody else who stands in their way.

I don’t want any of that to touch my kids. For that reason, I leave the house four mornings a week at 5:30, before they get up, and I usually get home between 5 and 6 p.m., when I put on my Mommy mantle and have some serious playtime. Leaving my kids each day is the hardest thing I do. I’m constantly worrying about their safety, even though I tell myself that I can’t think about those things, that I have to live my life as normally as I possibly can.

I wasn’t one of those women who always knew they’d have children. For the longest time, I didn’t think about it. In high school, a lot of my friends were taking courses in home economics, photoÂ­graphy and typing, but I was determined to follow a different track. I was fascinated by the field of criminal law because it deals with people’s lives, with their futures, in a way that really seems to matter.

In the late 1980s, I completed a diploma in criminal justice at a local university and was working on a degree in criminology when I did an internship at Citizenship and Immigration Canada. Soon after, I was offered a job, working at the airport, interviewing people to see if they qualified for entry into Canada.

At the airport, there were tons of refugees, many of whom came from Vietnam. There they were, just off the plane, wearing little more than rags. They were fearful of everything, of elevators and escalators, which they’d never seen before, and certainly fearful of people in uniform. The department provided them with the basics: clothing, food and some money. But there weren’t a lot of services to help them integrate into society. They were largely left to fend for themselves.

I think that lack of services has led to some of the ethnic communities’ involvement in criminal activity. If you aren’t given the opportunity to make a living, you have to support your family somehow, don’t you? And I watched this happen. It helped to prepare me for my current job as a member of the anti-gang squad. I know what these people have experienced and I try to use that knowledge.

At one point, I was transferred to a unit of police and government agencies working together on organized crime. That’s where I started dating my future husband. He saw me through my rookie years as I walked a beat in the entertainment district and through my frustration at seeing a guy who’d drawn a gun on club doormen get off after he was arrested because we couldn’t recover the weapon. But when I started to talk about having kids, he balked.

He already had two from a previous marriage and was scared that having more would take away from his time with them. He also worried about the nature of my job. I disagreed. I knew that life wouldn’t be complete unless I had kids. We broke up for a while, so he could think about things: about me, about babies and about jobs. And then he came back. We married around the time I joined the gang squad. We had our son two years later and our daughter a year after that.

I don’t broadcast what I do for a living. I don’t wear a wedding ring on the job, and I don’t tell people that we’ve had to wire our house with state-of-the-art alarms and emergency lights because of a death threat from a gang member that came through Crime Stoppers, the anonymous tip line, when I was eight months pregnant with my first child. It was vague – someone had bought a .22-calibre firearm, which is called “the hitman’s gun,” and our name was mentioned [on Crime Stoppers] – but I carried my regular-issue .40-calibre Beretta around with me everywhere. After our son was born, I kept it tucked in the diaper bag.

I’m not easily intimidated by people. I’ve arrested really big guys in clubs and at no point have I felt fear. But when it comes to my personal life, now that’s a different story. When I received death threats, every sound and creak had me jumping. Every time the sensor lights were triggered, I’d go out, gun in hand, and check the perimeter of the house. Once, I heard something loud around 4 a.m. and only later realized it had been the thunk of the morning paper delivered to our doorstep. Did I feel silly? A little.

When I gave birth to my son, I knew absolute, unconditional love for the first time in my life. I want to protect my kids from guns and knives and violence.

Part of our job on the squad is to do spontaneous checks of known gangster hangouts. I remember going into this bar where I saw a gangster I know on a date. I had him stand up and I asked him if he was carrying any guns. He was not happy and his date was shocked. I told him, “You should really be filling her in because she’s not impressed.” I don’t want to get into a pissing contest with these guys, but it’s all about respect. So he sucked it up. What else was he going to do?

I want my kids to be savvy and self-aware. I want them to ask the right questions and to make good decisions. I don’t want them to be fooled. But I admit that if either of my children ever came to me and said, “Mommy, I want to follow in your footsteps,” I’d try to dissuade them, to convince them to go into law or business, something that pays them a lot more money and has less of a danger element. If my son does well with the Lego he just got, for example, I’d encourage him to go into engineering.

Then again, I absolutely love what I do and I wouldn’t give it up for anything. I know it sounds hypocritical, to plan to counsel my children to do as I say, not as I do. But that’s me as a mommy, not as a police officer, and sometimes the priorities aren’t the same. They can’t be.