On romance and their roles in The Brothers Bloom 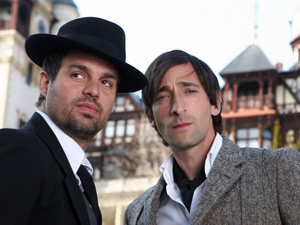 The Brothers Bloom (opening in May 2009) is a caper movie filtered through a fairy tale. Set in a topsy-turvy, technicolour world of luxury steamships, rat-a-tat dialogue and mysterious Russian mobsters, Adrien Brody and Mark Ruffalo play a pair of sibling con-artists on a transcontinental heist to charm a naÃ¯ve heiress (Rachel Weisz) out of her millions. Both playful and egg-headed – director Rian Johnson draws on influences as varied as James Joyce’s Ulysses and Federico Fellini’s 8 ½ – the film interweaves themes of fate and destiny alongside a rollicking romantic adventure and a thoughtful look at the sticky, complicated bonds between brothers. Chatelaine spoke to Brody and Ruffalo at the Toronto International Film Festival in September.

Q: In the movie, your character is forever playing different characters as part of his older brother’s elaborate cons. Is being an actor a little like being a con artist?

A: It wasn’t difficult to connect with him. As an actor, you’re constantly trying to put yourself in others’ shoes. And in doing that, the emotions and experiences I’ve had and connected to have been incredibly profound and given me insight into myself and to others. The difference is, I’m not trying to manipulate. I’m striving to do something very honest with my work. Rather than fake my way through something and trick people, I’m trying to connect to something.

Q: You won an Oscar for your role in The Pianist. Does winning an Oscar put pressure on your future performances to make each one better than the last?

A: I already felt that pressure within myself. I think having an Oscar means that other people may now expect more of me and it’s difficult to live up to expectations of any kind in life. The other day I was thinking about Leonardo DiCaprio in What’s Eating Gilbert Grape? [one of his first large roles] which he was just phenomenal in. Partly, it was the fact that I didn’t know anything about him and it was the first thing that I’d seen him in so there was no expectation; he was this revelation. As an actor, you cannot repeat that experience for the audience after that because now they have expectations. Once someone becomes famous, you start to know them, or think you know them because of what you read about them in the press. So I just try to look for inspirational roles which will allow me to go down a different path and explore something new for my own growth and in that process I hope I will bring something different for audiences.

Q: How important is your Oscar to you?

A: It was big blessing, something I’m incredibly honoured to have. I worked incredibly hard on that film and to receive that kind of recognition for something that meant so much to me is remarkable. The hard work you do for the right reasons is rarely acknowledged on such a large level. I’m very thankful.

Q: Your character Bloom falls in love with Rachel Weisz’s character Penelope. This is perhaps the most overtly romantic role you’ve done. Were you looking for such a role?

A: I’d been looking to do a classically romantic film for a long time. The dilemma when there is such attention paid to your work is that you might become intimidated to take risks – which is the death of an actor. I’ve tried not to have that limit my choices. I don’t want to just make career choices, I want to make choices that inspire me.

Q: Are you a romantic guy?

A: I don’t like to toot my own horn, but I’ve been known to do a few romantic gestures in my time.

Q: You play against type as a slick hustler. How did you prepare for the role?

A: I hadn’t played a part like this before – you know, the trickster, the rogue – so I was nervous about it. I have an old friend who’s a diamond thief, an ex-convict, a writer, producer, director, furrier. He’s the most gregarious, fun-loving, deeply-feeling person I’ve ever come across and he was a big influence on this part.

Q: One of the themes of this movie is the idea that life is a story and that everyone has the power to write his or her own life story. Do you agree with that?

A: I think you’re given a basketful of attributes. Nowadays, of course, you can change your nose, or your hair, you can change a tremendous amount about yourself, but essentially we’re given certain elements, certain characteristics and what you do with that is how you can write your life. Sure, if you can’t walk, that’s going to have a certain kind of impact on your life, but inside your situation, you have a whole lot of choices about how you’re going to live your life. I do think you can create your own destiny.

Q: You’ve worked with some incredible actors: Laura Linney, Joaquin Phoenix, Robert Downey Jr., Naomi Watts. What have you learned from working with them?

A: The relationship between actors in a film, it’s mushy, you fall in love with them, you get crushes on them, you get annoyed by them. It’s all over the place. It’s so close and you’re thrown into a crazy world and it gets so personal so quickly. To watch the way [other people] work, the way they see the world, if you keep yourself open, it broadens you.

Q: Adrien Brody says he’s a romantic guy, what about you?

A: I’m not a Don Juan in any sense, but I like to think of myself as a romantic guy. I’m a big lover of poetry and I’m very sappy about the idea of love.