Life, please cut me some slack

Losing Duncan was enough to make any week miserable. But when you compound it with the last few days...it gets even worse. 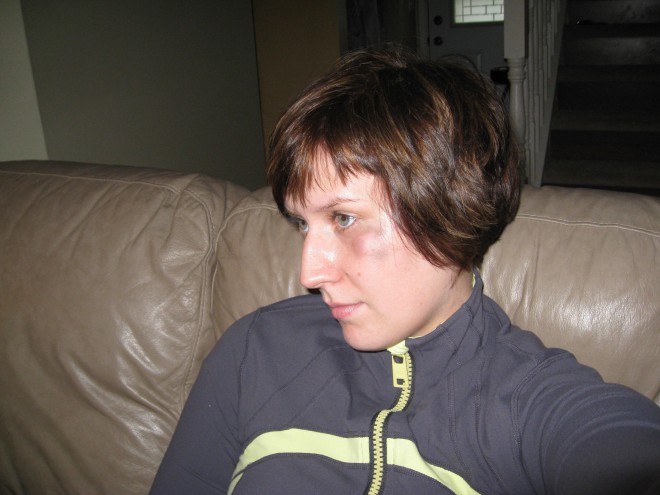 I’m, ahem…cough…a little notorious for injuries, bad things happening to me and all around, general bad luck. I’ve come to think of it fondly as a Thompson trait since my Mom and Dad often suffer the same kind of inflictions. Last year, Dad and I had a sort of unofficial competition as to who was injured more often. I won. Just barely.
So when people say that it can only get better from here in a chipper voice, I sigh, because they obviously aren’t a Thompson. They don’t know the Curse! Ha. And this isn’t negativity speaking or a sarcastic attitude. In fact, we, The Thompsons, often maintain humourous, light attitudes about everything, including our pain. It’s what gets us through it all, coming out on the other side stronger, braver, and a whole hell of a lot funnier. I’m having a hard time laughing right now. But soon. It will come.
Please, don’t for a moment think that I don’t realize that others out there suffer so much more than me. There are people who are sick, have lost family members and who want for so much more in the world than I do. But sometimes, I think we’re all entitled to our sadness, our moping feelings and our general malaise. I’m embracing my right to be sad and angry. I so badly need a break from my luck.
I knew Monday would be tough. Part of my routine for the workday involved showering, getting dressed, then meeting Duncan on the stairs where we would cuddle for ten minutes before I fed him and let him outside (okay, forced him outside…he preferred to stay sleeping). So I knew that without that part of my day, I would be emotional. I shut off the alarm and got into the shower, turned the knobs to their usual spot and hopped in. Then IMMEDIATELY hopped back out. No hot water. Wonderful.
I discovered a massive crack in the pipe to my hot water tank. When the plumbers arrived the next day, they had to replace all of the piping as my old stuff wasn’t to code. Another several hundred dollars into this stupid, cursed house of mine. But I had hot water again last night and luxuriated in a long, quiet bath. There was solace in that. For a moment.
But typical for me, I attempted to avoid some of Hydro’s massive new prices for the daytime running of my dryer, so I was doing laundry late at night. At 11:30, I strolled down into the basement, with an armful of bedding in my arms and slipped on some water leaking from the washing machine (thankfully, no major repairs…just a loose hose). Well, not so thankfully for my face, I slipped and whacked my cheek off the corner of the washer and I have a lovely black eye today that is nearly swelling shut. Hmm. The Thompson luck continues. I should also point out, this is my third black eye of the year. No joke. And no, no one hits me but I know Ben will be thankful to not be home so that people can stare at him as though he is a wife beater.
I woke up this morning hoping that the last week had all been a bad dream. I’m not broke from plumbing and vet bills! My face hasn’t French-kissed the washing machine! Duncan is alive!!!
Alas, no such luck. All is as it was last night. In fact…my eye is slowly getting bigger and blacker.
No Ben. No Duncan. No money. A less than stellar addition to my face. Yes, this is a bad week. But times will change eventually. They may continue to be awful until someone up there decides I’ve had enough and I deserve some magic in my life. That day will come. I have faith in that much.
In the meantime, it can’t hurt to hit up all the possible venues for a change in my life’s direction.
Santa, I’ve been so good this year. Please bring some new luck in that black bag of yours this year.
Kelly