The Genie award-winning actress would spend the day watching horror movies with her husband and best friend, or a walk along the Rosedale ravine in Toronto followed by dinner at The Bloor Street Diner 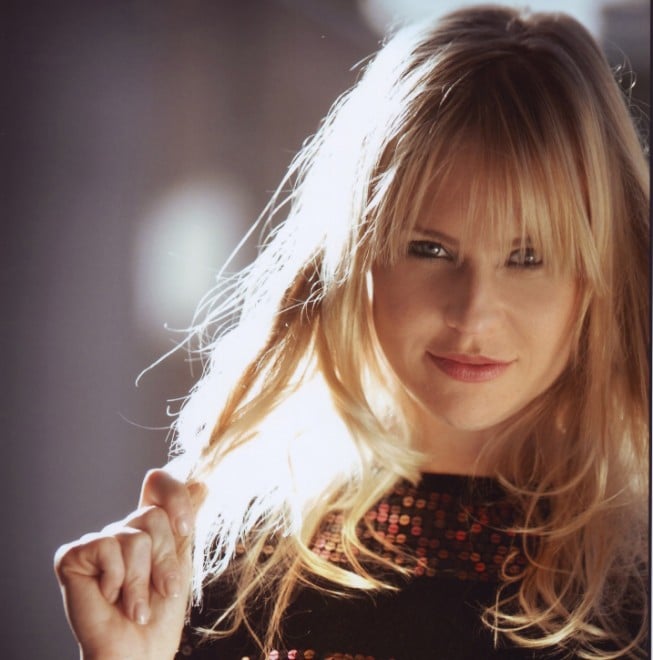 Kristin Booth has won a Genie award (for her role as an uptight yuppie in Young People F—ing), starred opposite Canadian hunk Ryan Reynolds and Woody Harrelson. Not bad for a gal from Kitchener, Ontario. The frank and funny actress is a familiar presence in films and TV—though she’s known for her chameleon-like ability to transform for her roles. Look for her as Ethel Kennedy (Bobby’s wife) in the controversial miniseries The Kennedys (History Television) when it debuts in Canada this April.

At home in Toronto, the actress took time to share her perfect Saturday with Chatelaine.com.

My perfect Saturday would mean slightly sleeping in—to like, 10 a.m. I’d get up and have an almond milk latte that I make here with my little Nespresso machine that I love. Then my husband and I would get the dogs all leashed up and go for a walk. We’d come back and probably go out for brunch to Bonjour Brioche—it’s on Queen Street East. My husband and I both love pancakes so we’d probably end up having them with fresh squeezed orange juice or something like that. Maybe a side of bacon, too—gotta have some protein!

Then we’d come back home and depending on the weather—if it’s a cold miserable day there’s nothing better on a Saturday then hanging out at home and watching movies, having a fire in the fireplace, and just being all cosy and homey. I have my favourites that I watch: The Princess Bride and Bridget Jones’s Diary. Those are two of my go to feel-good movies. My best friend and I have a bit of a weird obsession with horror films, so generally when I’m at home she’ll come over and all three of us will sit around and watch really bad horror movies, like the remake of Nightmare on Elm Street. It’s so bad. It’s awful. But then there are some really great ones. We just watched the original—I think it’s Swedish—of Let the Right One In. I like to be scared—to sit for two or three hours on the sofa with my stomach in knots.

If it were a really nice day though, we’d probably get going on a walk along the Rosedale ravine with the dogs. There’s a fabulous Evergeen Brick Works farmer’s market with all this organic food and all of these great vendors that we go to. It’s on Bayview Ave in the old Brickworks. There’s an entranceway off the ravine; it’s about a 20-minute walk. You can get all your organic vegetables there and they have fabulous coffee there and fabulous Canadian maple syrup. I think Jamie Kennedy makes French fries with that beautiful garlicky-lemon mayonnaise. We’d probably get some.

Around dinnertime—this is so funny, it’s not like it’s a fancy restaurant or anything—but we love The Bloor Street Diner so we’d go there. [My husband and I] had our first date there. The plan was that we were going to see The Blair Witch Project together. That’s a long time ago—I’ve just dated how long I’ve been with my husband! We ordered a bottle of wine [at dinner] but didn’t finish it in time so they kept it for us and we came back after the movie and finished the wine. So, I would say that a perfect Saturday would be going to dinner at The Bloor Street Diner and then seeing a movie at The Varsity, which is our favourite theatre in the city.

My go to meal at the Bloor Street Diner is their Cobb salad. I get it with the champagne vinaigrette instead of the cheese dressing, and I ask for no blue cheese. I don’t like it. It’s moldy! [The salad will] still have the avocado and the bacon—all the good stuff. My husband would probably get the burger because the burger there is pretty damn good. They have a steal there: if you have dinner there you get half-price movie tickets so we would do that.

My husband and I are both in the industry. He’s a writer so we have a pretty vast taste in films. We’ll see pretty much anything and everything. We love a good comedy just because it’s so much more fun to leave the theatre laughing rather than crying. But we do avoid some films because of me. My husband calls them ‘wheelbarrow’ movies. It means that at the end of the movie he’s got to take me out in a wheelbarrow because I’m so distraught that I don’t have the energy to leave the theatre on my own! Anything that has to do with animals or children dying—I’m a wreck. I’m actually embarrassed to say this, but King Kong, the movie with Naomi Watts, was a wheelbarrow movie for me. I was a mess. I was audibly sobbing. My poor husband was covering his face. We saw that movie with friends and they were looking at me as if I had four heads. I don’t think they’d ever seen me in that state before. My husband makes fun of me, but he’s exactly the same way. He’s like, ‘You can watch humans get blown up but if an animal gets hurt you’re like, ‘Oh, I can’t live!’

We just saw The Fighter, which I thought was fantastic.

After the film we’d head home. Sometimes I’ll take a bath before bed—I do enjoy a good bubble bath. I like lavender essential oil in it to help me sleep. But usually it’s just us crawling into bed and passing out. I’m sort of religious about washing my face before I go to sleep. But I will admit that on more than one occasion on a Saturday, I will skip that. That’s why I have towelettes in my nightstand!