Meet the woman who's schooling adults in sex ed

Winnipeg's Jodie Layne, our March Ms. Chatelaine, teaches doctors how to talk to their clients about sex and bar owners how to create safe spaces. 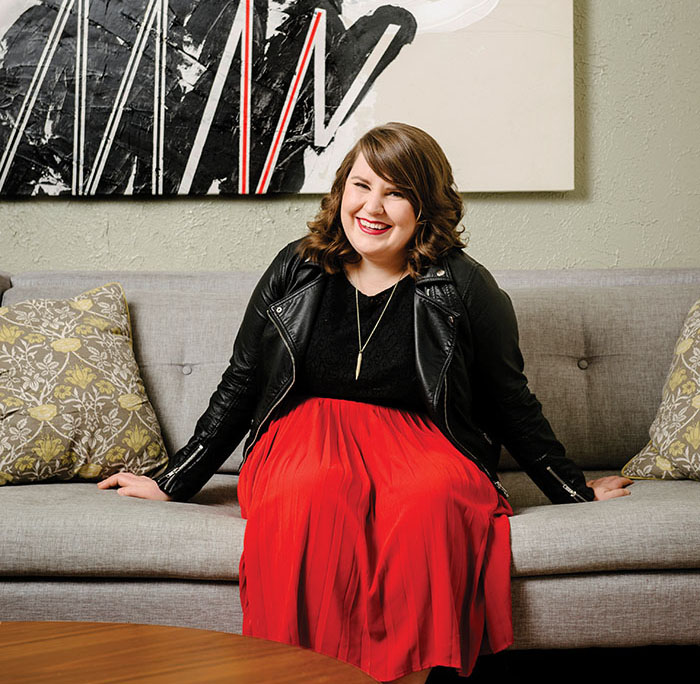 Jodie Layne is loud-mouthed and proud. At the age of seven, she wrote a letter to then prime minister Jean Chrétien, begging him to save endangered whales in the Gully, off the coast of Nova Scotia. He responded, thanking her for her concern and promising to look into the issue. Eight years later, the Gully became Atlantic Canada’s first marine protected area. “No one’s been able to shut me up since,” she says. “I blame Chrétien.”

In 2011, at age 22, Jodie was named one of Winnipeg’s 30 Under 30 by the Uniter, the University of Winnipeg’s student newspaper. Now 25, Jodie works as a health educator for Nine Circles Community Health Centre and runs Safer Spaces Winnipeg, an organization that speaks out against street harassment. This spring, the group plans to launch a campaign to combat the catcalling of female cyclists, an escalating issue in the city.

As a teenager, Jodie recoiled from the word feminist for the same reasons many others do. “I felt like it had a negative, militant connotation,” she says. “I didn’t think men were bad, so I shied away from the term.” Nevertheless, she was so driven to promote sex-positive attitudes for women that at age 15 she wrote an op-ed for the Winnipeg Free Press condemning slut shaming.

When she was 19, Jodie was raped by a colleague at the ski hill where she worked. “I convinced myself it was consensual until I realized, ‘This is not okay,’ ” she says. “That was the spark that lit the powder keg.” A year later, spurred by a desire to find meaning in her work, she joined a feminist collective and took a job at a community not-for-profit. In 2013, Jodie gave a talk at TEDx Manitoba, where she shared her experiences as a survivor of sexual assault. “I want to be able to look [other survivors] in the eye and say, ‘How can we fix this together?’ ”

Jodie spends mornings at the health centre counselling clients on safer sex and drug use and handing out condoms and clean needles. She also fields calls for the province’s Sexual Health Info Line, which might involve advising an 18-year-old who’s concerned about losing her virginity or instructing a 60-year-old woman who never learned how to use condoms. In the afternoons, she gives lectures to doctors and nurses on how to educate their clients about sex — not bad for a Catholic-school rebel who opted out of post-secondary education. “I’ve learned more from travelling and dealing with people first-hand than from any theory I’ve ever read,” she says.

At the end of last year, Jodie was asked to help design a safer-spaces policy for a bar called the Good Will — a pioneering strategy in Winnipeg. She spent an afternoon with staff talking about how to read social cues and how to effectively intervene in uncomfortable or violent situations. Later that week, three more businesses emailed her to ask if she’d do the same for them. “We can talk about violence against women all day long, but we need to reframe that conversation and educate people in the spaces where it’s happening,” she says.

Early accomplishments aside, Jodie is ambivalent about her future. “It’s stressful to think about what my career trajectory is going to be,” she says. “I’m more interested in learning how to better empower myself and others than I am in ascending the ladder.” This International Women’s Day (March 8), she’s encouraging others to re-examine all the ways in which women still aren’t safe in our society. “We need to take action against it right now. We’ve come a little bit of the way, but we have to keep that forward momentum going.”

My proudest moment was . . .
the deluge of sexual assault disclosures [I received] after talking about my own sexual assault. Getting “permission” to talk about it was the best gift anyone ever gave me.

I’ve started this a million times . . .
trying to have a bedtime routine and go to bed early! I’m a night owl.

I wish I were better at . . .
pacing myself. I just want to do everything yesterday.

My dream vacation is . . .
a road trip through the mountains to the ocean with good vegan food and concerts and comedy along the way.

I really admire. . .
teenage girls! It takes so much resilience to make it out of your teen years, and all the baby feminists out there are inspiring to the max.

My favourite moment of the day is . . .
when I get home and put on a podcast and start cooking dinner. Best.