How a random act of kindness changed this woman's life

It only took a few wrong turns for Jinger Forde to lose her nest egg and her hope for the future. Penniless and alone, she got back on her feet thanks to a random act of kindness. Find out how she made her way off the streets and into the boardroom. 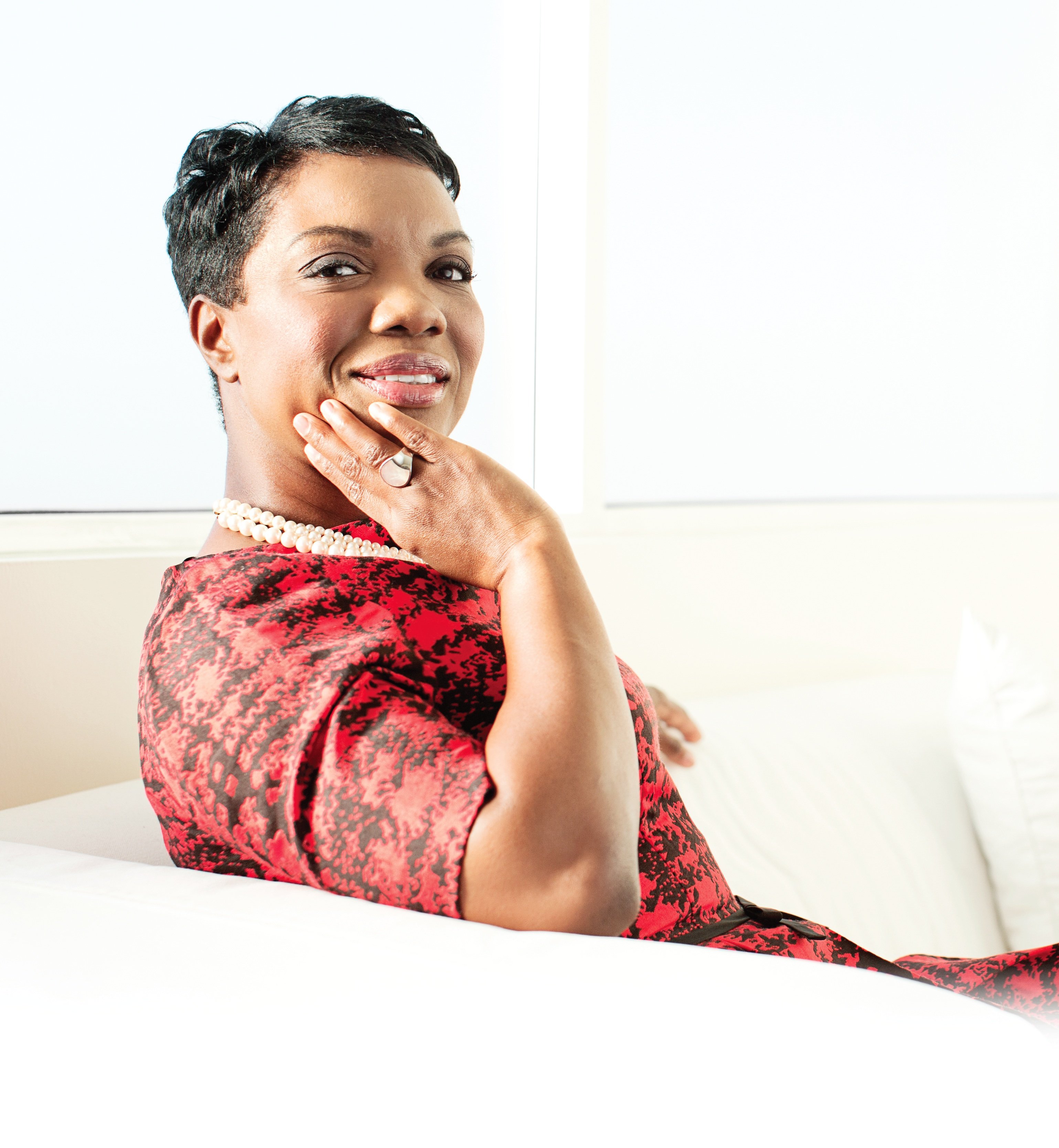 Eleven years ago, Jinger Forde lay on the sofa in her Calgary apartment, a garbage bag over her head, a handful of aspirin working its way through her veins. She was waiting to die when the fire alarm went off and firefighters began banging on her door, yelling, “Fire! Leave the building!”

Jinger removed the bag, put her shoes on and went outside. “I took it as a sign. I wasn’t meant to die.” It wouldn’t be the last time the actions of complete strangers would change her life.

What led Jinger to attempt to suffocate herself at the age of 34 was a series of false starts and dashed dreams—and a crushing sense of isolation. Born in Barbados, Jinger (like ginger) spent most of her childhood in Calgary, where her mom was a nurse and her stepfather worked as a mechanic. She describes it as a privileged, middle-class upbringing. “There was nothing I asked for that I didn’t get.” But she struggled with the sense she didn’t belong, rejected by her biological father (he denied she was his daughter) and insecure about her role in her family. “I grew up feeling people didn’t want me.”

When Jinger graduated from high school in 1986, she knew she wanted to go to university eventually but felt she wasn’t ready. “I wanted to take a year off, but my mother was insisting that I attend university.” Jinger had always loved music, and her high school band director suggested she join the military while she figured out what she wanted to do with her life. “I made the phone call later that day, and a month after graduating, I was in uniform.” But her family didn’t share her enthusiasm. “After seeing a few military movies, my mom felt it would be no life for her visible-minority daughter. Plus, we were a religious family, and the idea of picking up a weapon was an outrage. I was a huge disappointment for her.”

As a member of the naval reserve, Jinger spent 10 years serving as a training sergeant and musician. But while the military gave her a sense of strength and discipline, it was not her calling, she says. “I just could not seem to find a direction or path forward.”

She was, however, interested in law and politics and took a legal secretary course when she wasn’t performing at parades and Remembrance Day ceremonies or working with local youth on behalf of the military. She decided to leave the navy and dedicate herself to saving money for her education. “I was a legal secretary for two years and worked as many hours as they would let me while doing the weekend shift at a Petro-Canada gas station.”

In 2000, she enrolled at the University of Calgary, majoring in political science, minoring in philosophy, and still working nights at the law firm. “I loved being on campus. Learning new things. I really wanted to succeed.” But her exhilaration was dampened by a lack of support from her family. “I entered university not having the wind at my back, the ‘Come on, you can do this, rah-rah’ from people in my life. My mother said, ‘You failed everything else, you’re probably going to fail university.'”

By Jinger’s second year, the bills had piled up, she was behind on her rent, and her car — which made her hectic, round-the-clock schedule possible — had been vandalized numerous times, and she couldn’t afford the repairs. Jinger was desperate and even sold her beloved flute, but she was over $12,000 in debt and she was finally forced to drop out. She had friends, but none of them knew what she was going through or how dark her thoughts were. “I was embarrassed, ashamed. I had failed.” And that led to the suicide attempt in her apartment. “I was at the point of ‘This is it, I cannot continue. I cannot.'”

Even after she realized that suicide was not her destiny, Jinger was still faced with the same problems and called her mother for help. Recently remarried after divorcing Jinger’s stepfather, her mother reluctantly allowed Jinger to live with her in Florida. Jinger spent the next four months languishing in a bedroom at her mother’s home, battling a depression she was afraid to acknowledge and refusing to be upfront with her mother about her struggles. “My mom thought I was being stubborn and immature. But I couldn’t get out of bed. I had no one to talk to.”

The situation put increased pressure on an already fragile relationship. In May 2002, her mom handed her bus money and said, “I don’t care where you go, but you have to leave.” Looking back, Jinger says, “I really can’t blame her. She had her own challenges.”

Jinger returned to Calgary, but when the bus pulled into the bus depot, she had nowhere to go but a women’s shelter. And it was there the actions of a stranger gave her hope again. Sitting alone in the shelter’s common room, she was approached by a fellow resident: a tall, slender, older woman with greying hair. “I don’t see you eating. I will be right back,” she told Jinger. Frightened and uncertain of the stranger’s intentions, Jinger ran to her room. Shortly afterwards there was a knock on her door. Jinger reluctantly opened it. “I’m going to give you half of what I have,” said the woman, who handed her two cans of soup and $20 and then left.

Jinger was flabbergasted. “It wasn’t about the soup. She gave me hope. She believed in me. She took the time to notice me.” Jinger managed to line up some night shifts at the law firm she’d worked at before, spending her days searching for full-time work. When she got her first paycheque, she withdrew $20 and searched for the woman who had helped her, but she was gone. Jinger folded up the bill and tucked it in her wallet.

She stayed at the shelter for a couple of months while looking for a job. Jinger decided she would pursue her dream no matter what. “I had always envisioned myself as a professional. And the kindess of the woman in the shelter made me realize my self-worth and that I could achieve anything I wanted.”

Eventually, the shelter manager told her it was time to go. And Jinger finally made herself reach out for help. She called a former boyfriend with whom she had parted on good terms. He offered her a spare room, and she stayed there for three years, paying a small amount of rent, taking business courses and working her way up at a financial company in Calgary.

In the months that followed her departure from the shelter, Jinger kept an eye out for the woman who had offered her soup and hope, but she never found her. One day, at a grocery store, a cashier asked her if she wanted to contribute to a food drive. Still not out of debt and living paycheque to paycheque, Jinger took out the stashed $20 ball and handed it to the cashier. “It didn’t belong to me. It was time to do for someone else what she had done for me.”

And so began Jinger’s dedication to helping others. “it’s become the fabric of my being. I knew how my life had changed from a simple act, and I was eager to make a difference.” She started volunteering at the local food bank and sharing her experiences with high school students through the Junior Achievement program. She’s also a volunteer and speaker with the Canadian Women’s Foundation, helping women get out of poverty and abusive situations. But her philosophy extends to more than the organizations she belongs to. “Simply making time to sincerely listen without judgment is paying it forward.”

Today, Jinger is director of operations for Oliver Capital Partners, but she still hopes to pursue that university degree and is also working on mending her relationship with her family. “Much like myself, they have evolved and grown through their mistakes in life and have shown resiliency,” she says. “We go through the storms of life, and we become more evolved, deeper human beings.” And even 10 years later, when talking about her “guardian angel” in the shelter, her voice catches in her throat. “If I met her today, I would look her in the eyes and tell her, ‘You reached out your hand and you helped me find my sense of purpose. You saw me when no one else did.'”